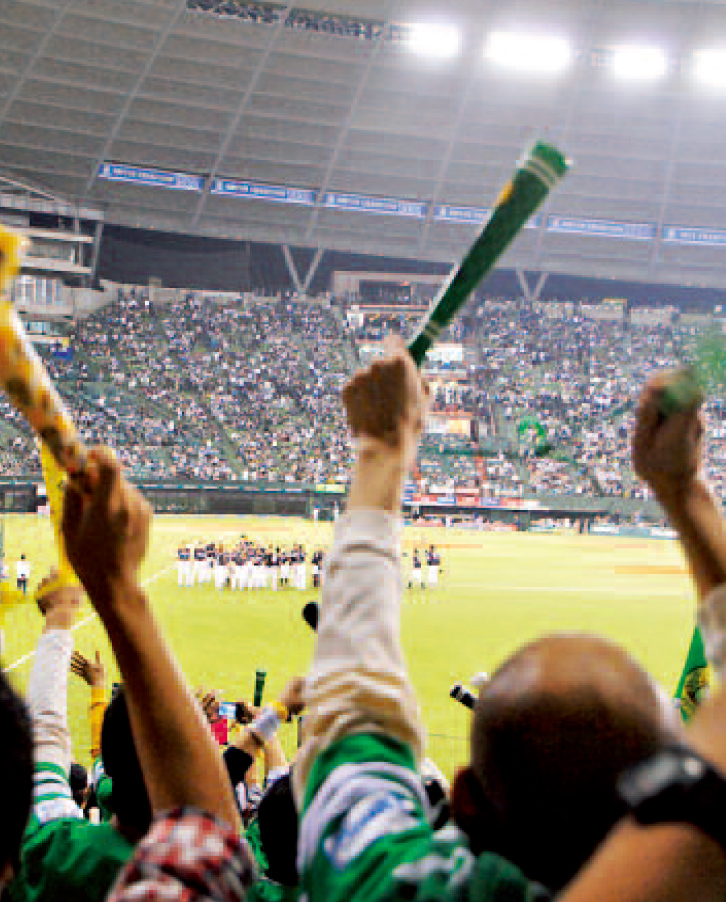 In this month’s column, I’d like to teach you some sports-related Japanese. In Japan, there is a certain phrase: “sports season autumn”. There are also the phrases: “appetite season autumn” and “reading season autumn”… but why autumn? There are a few reasons for this, but it is often said that the weather in autumn in Japan is good and makes it a season where people want to do something. As you probably know, summers in Japan are incredibly hot and winters are cold, so autumn is comparatively mild. The 1964 Tokyo Summer Olympic and Paralympic Games actually took place in autumn!

By the way, do you know that in Japan too, there are sports bars and sports cafes where you can watch sports while you enjoy some food? Picture this: you’re in a Japanese sports bar having a drink, and you strike up a conversation with the Japanese person sitting next to you. You decide to have a conversation about what sports you like to watch:

A: Watashi mo desu!
Dono senshu ga suki desu ka?
わたしもです！
どの せんしゅが すきですか。
(I watch tennis too! Which player do you like?)

A: Osaka senshu no fan desu.
おおさかせんしゅの ファンです。
(I’m a fan of Osaka)

Let’s break this conversation down to three main points. Firstly, let’s quickly learn the names of some sports in Japanese. Actually, quite a few Japanese words for sports come from English, so you can guess using the sounds. “Tenisu” in the conversation above is “tennis”, but what do you think “ragubii”,“bareebooru” and “basukettobooru” are in English?* Did you manage to guess? Other popular sports are “sakkaa” (“football”) and “yakyuu”(baseball). * Answers: rugby, volleyball and basketball.

My second point is about a grammatical construction used in the conversation. In the previous column, you learnt about “yoku” (“often”) and “itsumo” (“always”). To add to that, there is also“tokidoki” (“sometimes”) and “tamani” (“rarely”). So when you reply to a question with “iie”(“no”), you can add further details like: “iie, amari + negative verb” (“no, not often”) or “zenzen + negative verb” (“no, never). So for example, “iie, amari mimasen” means “no, I don’t watch often”. Finally, I’ll talk about an expression you can use when you talk about something you like. In previous columns we have talked about “NOUN ga suki desu” (“I like NOUN”). When you want to say that you really like something in English, you can say “a fan of NOUN”. In Japan there is the same expression, but the word order is always like this: “NOUN no fan”. If you replace the NOUN with someone’s name or a sports team, you can say something like “Beckham no fan” (“I’m a fan of Beckham”) or “Arsenal no fan” (“I’m a fan of Arsenal”).

In the conversation, we said “Osaka senshu”. “Senshu” is a noun that means “athlete” or “sports player”. If you are talking about an athlete, you can just call them by their name (for example, “Osaka”), but if you want to talk about them more respectfully or if you are talking about them in a formal setting, rather than using the more generic “san” honorific, we would address them using their job title: “Osaka-senshu” (literally: athlete Osaka). Next time, we’ll continue to learn about sports. I’ll teach you about “words of support” you can use when watching a match.

▶ check out this information on talking about what you do on your days off in Japanese:
http://a1.marugotoweb.jp/topic.php?tp=6

▶ minato’ – learn Japanese and interact with fellow students around the world online.
https://minato-jf.jp/

No26 [Language] Omoshiroi yo NIHONGO!

No51 [LANGUAGE] Omoshiroi yo NIHONGO!

No48 [Language] Omoshiroi yo NIHONGO!

No47 [Language] Omoshiroi yo NIHONGO!

No43 [Language] Omoshiroi yo NIHONGO!

No40 [Language] Omoshiroi yo NIHONGO!

No36 [Language] Omoshiroi yo NIHONGO!

No35 [Language] Omoshiroi yo NIHONGO!

No28 [Language] Omoshiroi yo NIHONGO!