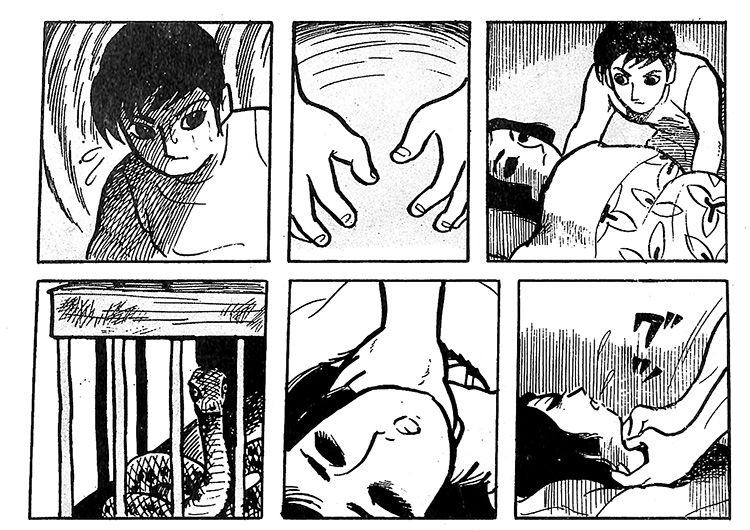 Someone who’s considered to be a living manga genius agreed to answer our questions.

2019 will be remembered by manga fans as the “Year of Tsuge Yoshiharu”. For a very long time, and with just a few exceptions, foreign comic fans could only read Tsuge’s stories in Japanese. However, this year French and English translations are finally coming out, respectively published by Cornelius and Drawn & Quarterly. Both editions will include Tsuge’s complete adult works between 1965 and 1987. It took about ten years to convince Tsuge to give his approval for these translations. The 81-year-old artist is considered a sort of eccentric genius, both because of his eventful life and the nature of his work. Having penned his final manga more than 30 years ago, Tsuge has tried to “disappear” from public scrutiny, refusing almost any contact with the media and manga establishment and only keeping in touch with a small circle of close friends. Zoom was extremely lucky to meet him in Chofu, where he lives, for this exclusive interview. I would like to thank editor Asakawa Mitsuhiro for his indispensable help in arranging our meeting. He also joined in our conversation.

You’ve lived in Chofu for a long time, on and off. What kind of place is it?

TSUGE Yoshiharu: Hmm… what can I say… Let’s say I don’t dislike it. When I first moved here, around 1966, it was pretty much like a country village. Until then, I had lived in central Tokyo, so I was very surprised. I mean, people still used horse-drawn carriages to carry things around. Coming from a gritty inner-city environment, I was actually quite pleased by what I found – a quiet place, with few people around… It was the right place for me.

So I guess you don’t like it that much now?

T. Y.: Well, it’s completely different. It’s very convenient, of course, with many shops and everything, but it’s a little too crowded and noisy for my taste, especially around the station.

You first moved to Chofu in order to work at Mizuki Pro [Mizuki Shigeru’s studio], didn’t you? What was it like working for Mizukisan?

T. Y.: It wasn’t bad, but nothing special either. Many people don’t know this because, at the time, Mizuki was already famous, but I actually started working with comics 2-3 years earlier than he did, so there wasn’t really anything he could teach me. When I joined him, he already had a number of young assistants at the studio. They were good enough to draw the backgrounds, but he needed someone with more ability and experience to draw the characters, so he asked me. Because you see, Mizuki wasn’t very good at drawing people, particularly women (laughs).

Your female characters are certainly very cute. One of my favourites is the young fashion designer who stars in “Umibe no jokei” (A View of the Seaside).

T. Y.: To tell you all the truth, apart from Kitaro [the protagonist in hit manga “GeGeGe no Kitaro”], I drew all the characters.

Did you hang out together outside the studio?

T. Y.: No, not really. He was quite a bit older than me, so we didn’t really have anything in common. No common interests or topics of conversation, nothing. Even at the studio, he was all about work. He was pretty much the quiet type.

ASAKAWA Mitsuhiro: But once you all went together on a work-related trip, right?

A. M.: Your personalities were quite different, right? You were the serious type, always giving a lot of thought to whatever you were doing, while Mizuki was a happy-go-lucky optimist.

T. Y.: Well, not really. Mizuki liked to play dumb, but he was actually a very sensitive person.

A. M.:Actually, Tsuge’s work went well beyond character drawing. At the time, Mizuki’s “Ge- GeGe no Kitaro” was being shown on TV. Working on weekly deadlines is hard for everybody, and Mizuki sometimes ran out of ideas, so he would ask Tsuge for help. Some of the stories in “GeGeGe no Kitaro” were actually created by Tsuge, not Mizuki.

Starting in 2019, your work will be translated into both French and English. It was quite a long wait, though.

T. Y.: You wonder why it took so long?… It’s hard to explain… For a long time I tried to escape other people’s attention. I’ve never liked to be put under the spotlight. I only wanted to lead a quiet life. In Japan we say ite inai, which means living on the margins, not really being engaged with society, trying to be almost invisible if you like.

The French and English editions will both cover the years between 1965 and 1987. When comparing your works from different decades, your approach to both style and content has changed quite a bit through the years.

T. Y.: The big turn in my career was made possible by Garo magazine because I was given free rein to draw whatever I wanted any way I wanted. Up to that time, the kashihon manga I worked for catered to the readers’ tastes, and most of those readers were young kids. So I had to follow certain guidelines. That’s why nearly all my work from the 1950s are of the comics genre. It was quite frustrating, and I was never totally satisfied with the comics I drew at the time. But at Garo I was suddenly free to pursue my vision. That’s how “Numa” (The Swamp) was born. Thanks to that story, people began to take notice.

What was the process by which you created your stories?

T. Y.: Wow, what a question (laughs). My aim, whenever I was given the chance, was to distance myself from traditional storytelling. You could say I wasn’t interested in what we call the ‘plot.’ When drawing for children, I was always told to tell easy-to-understand stories. Go easy, be clear, that’s what the publisher always said.

Where did your story ideas come from? For example, were your travels a source of inspiration?

T. Y.: Not really. Nearly everything came from my imagination. Even with my tabi-mono (travel stories), the plots were already mostly formed in my head by the time I visited those places. Then, of course, I may use some of those locations in my comics, but the stories themselves had nothing to do with reality or my life experiences.

T. Y.: Even Mizuki thought so (laughs). At the time, we didn’t see each other all that often. So one day, we ran into each other and he says, I heard you’re selling rocks from the Tama River (laughs).

On the other hand, your comics seem to exist outside history. In the 60s, for instance, a war was raging in the streets of Tokyo and all over Japan, but one would be hard pressed to find any mention of them.

T. Y.: You’re right, I had no interest whatsoever in social issues. I was always looking inward. I had no time for the student demonstrations and the New Left. I didn’t even know what was happening out there.

A. M.: Well, it makes sense when you realise that Tsuge’s aim was to drop out of society.

You always like to repeat that you consider yourself a craftsman more than an artist. Why is that?

T. Y.: It’s difficult to explain… To me, drawing comics was just like any other job. At the end of the day, for me drawing is a craft. When I think about what I did, rather than an artist waiting for inspiration, I see myself as someone who did a sort of manual job. Drawing comics, after all, is something you do over and over again, spending hours and days on a story, and you get better with practice. Just like a craftsman. That’s what I did particularly in the 50s, that is before I got to draw more arty stuff.

Among the many stories you’ve created, is there one you like in particular?

T. Y.: Hmm… That’s another tough one to answer… You know, I’m getting senile and I’ve forgotten many things (laughs).

[I show Tsuge a few photos he took during his travels.] I wonder how you managed to take this picture [it features a group of naked middle-aged ladies in a hot spring]. I mean, you were a man…

T. Y.: Actually, it was my wife who took this one, but it doesn’t really matter. This is a mixed onsen in Tohoku. They are still common in the depths of the countryside or in the mountains. As you can see, these women seem to be enjoying the situation. The funny thing is, women are more enthusiastic than men about mixed onsen. To them it’s just natural to be seen naked by a man. There’s nothing to be shy about. On the contrary, they take it badly if you’re too selfconscious about it.

Are they local people?

T. Y.: No, most of them are travellers. In the countryside, where the rhythm of life follows the seasons, there are rather long stretches of time when farmers have nothing to do. Traditionally, they spend that time in hot springs, relaxing and recuperating from their hard work.

Why did you find such places so charming?

T. Y.: They were not just old: they were gradually crumbling away. I guess I was fascinated by the process of decay, the passage of time that leaves a trace on people and things. In this sense, the extreme north of Honshu [Japan’s main island] was the best… Good times… I often travelled with my best friend Tateishi… He died a few years ago… Hokkaido, on the other hand, wasn’t really interesting because everything was relatively new, so I never went there.

I guess you don’t travel a lot these days?

T. Y.: No, I lack the physical strength to do it. Nowadays, my movements are limited to cycling around the neighbourhood from one shop to the next in search of good deals; I’m like a housewife. I already have my hands full just doing the laundry, shopping for groceries and cooking three meals a day. I hardly have the time to listen to music, watch a film or read a book like I used to. On the other hand, I sleep a lot. They say a six-hour sleep is enough at my age, but I spend as much as 12 hours in bed. That’s my life these days. But it’s not that bad.