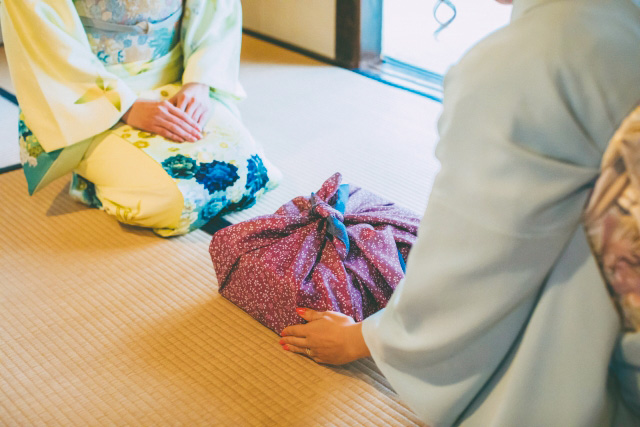 Konnichiwa, Mina-san! (Hello, everyone!) There are many times when I listen to someone not from Japan speaking Japanese, and regardless of their fluency I think: “this person really sounds like a Japanese person”. In this month’s column I want to talk about those conversational examples of someone sounding “like a Japanese person”.

Even if you’re not from Japan you might be aware that many Japanese people have difficulty saying “yes” or “no” clearly, and the above conversation is a typical example. For example, do you think B is accepting the invitation to the cinema or not? I bet a lot of you thought: “a LITTLE… what?” Even though there is not a single word in the conversation signalling whether or not this person intends to go to the cinema, “a LITTLE”, when used here, gently conveys the speaker’s meaning – “no” – without actually using the word “no”. In this context, “ちょっと chotto (a little, somewhat)” means that the implied end of the sentence has been left unsaid. Japanese speakers understand that “chotto” is a word that is usually placed in front of a negative response. and so, even if the person does not respond directly in a negative way, even without hearing the end of their sentence, the person asking the question would understand that the answer means “no”. what’s really useful about this is that using “chotto” in this way means you can turn down an invitation without having to tell a white lie. This custom of not clearly saying “no” and instead using vague phrases is a way of being considerate towards one’s conversational partner without being rude or hurting them. Maybe it is because Japanese is a contextual language which often relies on being able to read other people’s “thoughts/desires” while talking to them regard- less of what they directly say or don’t say that this conversation works.

“Reading the air”
A: This room is a little cold, don’t you think? (Kono heya sukoshi samuku nai?)
B: OK, I’ll close the window and put the heater on. (Jyaa, mado o shimete hiitaa o tsukeru ne.)
A: Thanks. (Arigatoo.)

Speaking modestly
A: (while handing over a gift). Thank you for inviting me. This is SOMETHING BORING.
(Ojyama shimasu. Kore, TSUMARANAI MONO desu ga…)
B: Oh, you shouldn’t have! Thank you. (Maa, ki o tsukawanakutemo iinoni. Arigatoo.)

This type of conversation often happens when people are invited to a friend’s house, but of course, it doesn’t mean the giver is giving the friend “SOMETHING BORING (つ ま ら な い も の tsumaranai mono)”! and it also doesn’t mean that the recipient of the gift believes they are being given a boring present. It’s a modest phrase that has been used for a long, long time that pretty much means: “I tried really hard to buy a nice gift, but of course I don’t know if you will like it or not”. Lately, there are people who will say something a little more direct and close to their actual feelings: “心ばかり ですがkokoro bakari desu ga (It’s just my feelings)” or “ささやかですが sasayaka desu ga (It’s small)”. I’ve translated it literally here, but these are phrases you wouldn’t really use in English.

▶︎‘Minato’ – learn Japanese and interact with fellow students around the world online.
https://minato-jf.jp/