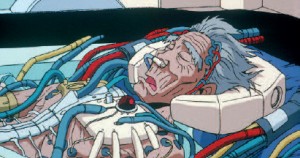 In Roujin Z, the author of Akira tackles a burning subject. Unfortunately, Kitakubo’s adaptation doesn’t draw to its level.

One of the companies that has been dealing with advertisement in the press is called France Bed. In spite of its name, it isn’t French, but it deals with selling all kinds of beds. Lately, it has been promoting its medical range that is specialised for elderly people. Japan, as it has been said, has entered a phase of accelerated ageing of the population. They call this phenomenon kôreika shakai (highly ageing society) that says a lot about the country. Currently, 23,1 % of the Japanese population is over 65 years old, which when compared to Great Britain’s 15 %, constitutes a real challenge and raises many debates. In order to understand the height of this challenging problem, all you need is to be reminded that 65 % of victims in the tsunami that devastated the North-East of Japan on March the 11th 2011 were over 60 years old. It isn’t new, and this issue has been shaking the country for approximately thirty years now, since the authorities started noticing that the birth rates kept falling while on the other hand, life was getting longer as medicine was progressing. At the time, centenarians were still rare and were reported on in the newspapers. Nowadays, it has become common.

Thirty years ago, Japan was at its economic peak, and the debate on ageing could be summed up to building beautiful villages in Spain, where the golden ageing Japanese could happily end their days. In 1991, the bursting of the financial bubble sounded the knell of these crazy projects, and bought the Japanese back down to earth. The problem couldn’t be exported, so it had to be dealt with on the spot, with make do and mend. Facing the lack of arms in the elderly person’s care sector, Japanese companies started developing technologies to help accompany ageing.

Societies such as France Bed, but also better-known Toyota, have invested in research. In 1991, Roujin Z was screened for the first time in Japan, with animation signed by Kitakubo Hiroyuki in a screenplay written by Ôtomo Katsuhiro. In a close future, society experiences a serious problem with ageing population. Old people’s homes are crammed, and lacking staff. So the Ministry of Health decides to launch the Roujin Z project. It consists in placing elderly people in robotised beds equipped with artificial intelligence that has yet to be invented. The first patient to benefit from one of these is called Tezawa. He is treated by Haruko, a young intern nurse. She understands from the old man that the solution may well become a real problem. The stage is set. With this topic, Ôtomo Katsuhiro, to whom we owe the wonderful Akira (1988), let his unleashed imagination run free, and shows us once more his aptitude in understanding the current climate. Incidentally, he has lately been working on a new series of manga that also deals with today’s Japan. But relating to Roujin Z, other than the question of how to handle the ageing society, what is particularly interesting is the relation that man maintains with robots. In the movie, Tezawa, a long since widower, will recognise his deceased wife the love of his life, in the z-001 robot. It’s as if his wife were going to reincarnate in the robot, so suggests the Buddha at the end of the movie: a symbol of reincarnation. This shows that Japanese animation can produce interesting and profound stories in terms of topics. This doesn’t mean that Roujin Z is the animation of the century. Its production leaves much to be desired. Kitakubo Hiroyuki, who later on directed Blood: The Lats Vampire, hasn’t yet reached his best. The animation doesn’t level with the story, and that ruins some of the pleasure. But you can’t let the looks stop you from going any further, insofar as it is a premonitory. The topic that is tackled is still very current, as already said. Recall Ikigami, Ultimate Limit (Viz-Media) by Masemotorô. It’s not about dealing with ageing people, but with the regulation of ageing by anticipating and deciding randomly on who should die. Our Western countries should soon be catching up on those rates, it may be a good idea to watch Roujin Z as of now.