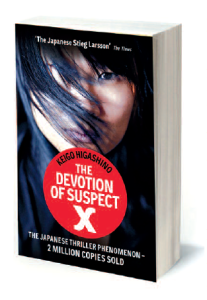 This is a rendez-vous with one of Japan’s best authors. The Devotion Of Suspect X shows the maturity that crime novels have reached in the archipelago.

After the Second World War, Japanese crime literature experienced the same diversification as in the West. The same categories of crime novels as in the rest of the world can now be found in Japan. I think it can be said that Japanese crime literature has reached the level set by Anglo-Saxon countries. On the other hand, French-style psychological novels are almost inexistent. From that point of view, there are differences between French crime novels and those written in Japan. A neo-traditionalist trend also emerged, related to the increase in popularity of video games in the 80s. It’s comeback that puts forth mystery, enigma, and unexplained murders. I think this phenomena is not very widespread in other countries”, explains Gonda Manji, one of the best crime novel specialists in Japan.

Amongst the authors he stands up for and exposes, are Higashino Keigo of course, whose work is recognised for his meticulous writing and original intrigues as you may read for yourself in The Devotion Of Suspect X. Unlike Miyabe Miyuki and Kirino Natsuo who write torturous well built novels, Higashino Keigo has chosen a wiser approach, by leading the reader into the meanders of thought and the torments that haunt the stories’ characters. With The Devotion Of Suspect X, you mustn’t expect suspense nor vibrating action. Indeed, this is a classic crime novel in all its form. As soon as the first pages, the reader discovers who the victim and the murderer are. It’s an investigation in the manner of Columbo, but with more subtlety. Of course the whole investigation process is dismantled in order to involve the reader in the police’s reasoning. It is well developed, but a little classical. After all, a crime novel stays a crime novel. Whatever the investigation, alibis need to be checked, theories need to be confronted, and the detail that will allow to expose the criminal needs to be discovered. But Higashino’s story isn’t without disconcerting the policemen in their investigation, who face a pretty complicated case. Hanaoka Yasuko’s exhusband kept on harassing her in her own home, until she and her daughter, still in middle school, kill him. Problem is, her neighbour Ishigami, a math’s teacher, heard everything and offers to help cover up the crime. He commits to getting rid of the body, and gives her guidelines on what to tell the police. Being a bright mind, the neighbour thinks up every little detail of the investigation, so such as with a maths exercise that one tries to undo bit by bit, the reader follows the police’s investigation backwards. It is so impressive that you might end up liking maths! The policemen’s deductions and experience aren’t sufficient in undoing the complexity of the case. They need support. It is given by one of Ishigami’s friends, who ends up understanding the ins and outs of this affair. Higashino Keigo’s novel is solid, ingenious, a sort of “perfect crime” that he offers to dissect backwards, and its only little by little that you understand why Ishigami gave such instructions to his neighbour and her daughter. Other than solving this “mathematical” enigma, the author also takes interest in the characters’ psychology, in what really motivates them.

Why is Ishigami protecting his neighbour when he risks being judged an accomplice? And how can the mother and daughter live with such a crime on their conscience? When reading this great novel, you can understand why Gonda Manji considers that Japanese crime literature is now at the same level as the European and American genre. Don’t wait to dive into The Devotion Of Suspect X, unless you’ve got something more urgent to do.