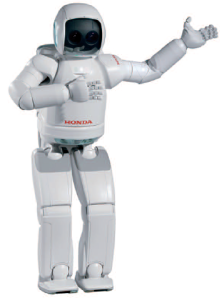 Whether for the future of their economy, or in everyday life, Japanese rely on robots.

The car industry was the motor of our economy for several decades. It is time to turn a page, and evolve towards something new. This something is robots.” Tomida Shigeru, Calio’s manager, is positive. According to him, the next growing cluster in Japan is robotics. His company experiments with them a lot, and encourages young researchers to let their imagination off the leash in this rapidly evolving sector. Car constructors have apparently understood that things are changing and that they need to adapt to the new order. It is not surprising that Honda and Toyota are first in line in this Japanese field of excellence. Asimo, which was presented for the first time in 2000, is Honda’s great pride. In eleven years of existence, this robot whose first steps astonished us all, has made extraordinary progress. Now it can run fast, including on uneven ground, it has learned to avoid obstacles and behaves autonomously in certain situations. On it’s own side, Toyota has also been working on humanoids, but it is now focusing on machines that are capable of helping people with reduced mobility. Last fall, it launched two “nurse” robots that caused a sensation. The first one of them helps people with articulation problems walk. The second one helps someone sick with going from his bed to the toilets without needing  anybody else’s presence. The car-builder’s intentions are understandable, what with problems related to the population’s fast ageing, and the announcement of a shortage in medical assistance. Although Japan is already confronted to such problems, many industrialized countries will encounter the same fate in the coming years. And when that time comes, Toyota’s made in Japan robots will be first in line. Other companies, big and small, as well as research centers, are mobilizing to progress in this growing sector. At Tokyo’s technology institute, Hasegawa Osamu has developed a system allowing robots to project themselves in the surrounding environment, and thus adapt to it. He simply explains, “It’s an attempt to build a relation between robots and the real world”. If there is still much to be done, everyone is aware that this is a field in which “made in Japan” can gain popularity, maybe even rise to peaks.

Asimo is 11 years old. He knows how to do many things.

Japan has reached peak heights in many fields, and it owes it partly to capacity of powerful computers’ to calculate and help scientists in their research” they say Fujitsu. For years, the computing company that has been working on developing a new machine that is capable of solving extremely complex equations at an incredible speed, launched a great communication campaign at the end of 2011 aiming to promote Japan’s “power” in that field. After a terrible year for Japan, Fujitsu’s initiative was to promote both its own products, as well as all of the country’s, in order to comfort the population that has been inclined to be miserable lately. “During the 21rst century, the technological challenges will grow in complexity. In the transport sector for example, the equipment will need to be fast running, resistant, reliant and ecological. In order to bring together all these parameters, complicated calculations are required. For weather forecast, it’s the same thing. Elaborating reliant climatic models by using all the data collected over the past 100 years also requires phenomenal calculating capacities. This is just a minute idea of the possibilities the new super Keinx computer can offer” they insist at Fujitsu. The Japanese company contributes to increasing the Japanese Industry and the made in Japan radiance. It consists in advanced technology of course, but it is a pride shared by a great number of people. By insisting on the direct impact that this machine can have on Japanese’ every day life, Fujitsu intends to associate the whole population to its success. In other words, the company’s managers would like the population to identify with their success, once more, as it used to, not so long ago.