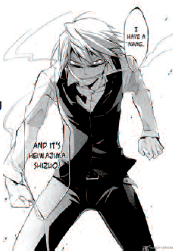 Ryugamine Mikado is a young teenager who dreams of the exciting life of big cities. when his childhood friend Kida Masaomi invites him, he gets transferred to a high school in Ikebukuro, in the northern quarters of the capital. Masaomi warns him about some people he should avoid: a violent man dressed as a barman, an informant and a mysterious gang called “dollars”, and a biker with no head. To crown with this, Mikado witnesses an urban legend on his first day in town: the biker with no head riding a black motorbike. That’s how Durarara!! starts, one of Japan’s great fantasy successes. Adapted as a manga by Satorigi Akiyo in 2009, then as an animation series a year later, the story has been given new dimensions. It can now be read in English, the two first volumes have just been released under yen press. with the diversity of the characters’ own stories, this manga is a great success that deserves to figure in every enlightened amateur’s bookcase.