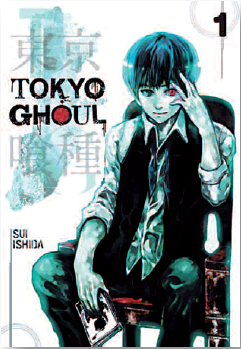 Ishida Sui’s first published work is a success. It particularly critiques our prejudices and our rejection of what is different.

Promoted as part of the zombie manga genre, Tokyo Ghoul portrays a type of monster that isn’t quite one of of the living dead: a ghoul. This creature comes from Arab folklore and differs from modern zombies that are often associated with biological infection, whereas ghouls are mystical creatures. In the famous tales of The Arabian Nights, ghouls are considered to be demons similar to sirens who appear in the guise of seductive women and devour travellers. This is how we meet the first ghoul in the story, when Lize seduces Ken before having him for her evening meal. Just like zombies, ghouls feast on human flesh, but hunting humans for food is the only trait shared by these two species. Ghouls have their own free will, great intelligence, and are capable of melting into a crowd of mortals. In Tokyo Ghoul, some of these creatures even run a coffee shop (the only human beverage they can stomach) that serves as a meeting place for them and their human partners. These creatures are also said to have the power to paralyse, although this doesn’t get mentioned in the manga. Ishida bestows each ghoul with their own particular weapon, known as a Kagune, that manifests in many different terrifying forms, such as a sting, tentacles, or butterfly wings. Unlike other stories where the survival of the human race is under threat, Tokyo Ghoul doesn’t allude to a large scale epidemic. On the contrary, ghouls appear sparingly in the series, even though they are present in every district in Tokyo. The adventure starts in a quiet neighbourhood and develops as several powerful ghouls meet together in ever more risky places. Similar to Metamorphosis, Kafka’s famous novel where a man wakes up one morning to find himself living in the body of an insect, Ken wakes to find he is trapped in the body of a hybrid being.

He finds his monstrous nature unbearable, and his irrational urge to eat human flesh terrifies him. He completely rejects his new nature and tries cling on to his previous life. But of course, it’s quite impossible. Ken’s new life is a descent into hell from the very first step. Nevertheless, once he’s reached rock bottom, his eyes are opened to new possibilities; some ghouls are dangerous, but others only wish to live in peace. Even better, some will even help him survive. This metamorphosis brings him a new perspective on these creatures, although the rest of mankind continue to view them as a threat. The murderous activities of the ghouls have encouraged men to set up an elite task force to hunt them down. The team is made up of humans with exceptional strength and armed with mysterious weapons to help them complete their mission. Many of these fanatical hunters have seen innocent people perish at the hands of ghouls and would now do anything to avoid any further tragedies. They refuse to imagine that ghouls can have a conscience, as was the case for Ken to begin with. Furthermore, some sadists among the team kill ghouls purely for pleasure, blindly repeating the bloody hunt, so evil is not necessarily just on the side you think it will be. Standing midway between these two of species at war, Ken ends up revising his ideas about ghouls. He also understands that his misfortune has made him a unique being, perhaps the only one capable of understanding the irresistible, even vital urge, for human flesh, while still maintaining his essential humanity. Meanwhile, his former fellow human beings invent new ways of detecting ghouls and invest more energy into their annihilation, so hastening their eventual eradication. Can Ken be their salvation? Tokyo Ghoul demonstrates that you can still talk about the living dead without employing stereotypes. Ishida addresses issues of otherness and society’s misconceptions within a horrific universe that he portrays with excellent drawing skills (especially as this is his first published work), using very dark inking and the most sinister visual character representation. The ghoul-on-human and human-on-ghoul hunts provide a good dose of action for a well rounded manga. Here’s a novel you must try.