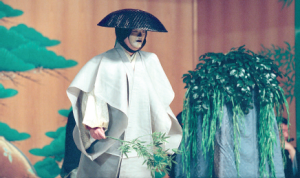 On the 7th and 9th of September, two high quality shows will be presented in London and Orford in Suffolk, which combine classical Japanese theatre and British tradition.

Noh theatre’s inheritance stems from the oldest forms of Japanese theatre. Its origins lie in religious celebrations that used to take place in the countryside, in order to amuse the deities and consequently to insure their benevolence towards the harvest. These performances including dances, costumes and masks are known as Kagura. After the arrival of Buddhism and its new kinds of ceremonies in Japan around 650 AD, Kagura with its allegiance to the older rites of Shinto, started to lose prestige. The performances became more secular in meaning, yet were still just as festive. These new forms of entertainment were called Gagaku and Bugaku, then during the 9th century Sangaku evolved and finally Sarugaku (Lit:“Monkey games”) was added to the repertoire, featuring acrobatics, magic tricks and comedy. It was during the Muromachi era, under the authority of the Ashikaga Shoguns, that the father and son actors Kanami and Zeami established the rules for what was to become Noh. They kept the main outline of Sangaku but changed its form completely. Inspired by the new school of Zen Buddhism, which was now rapidly expanding, they wrote new texts and imposed strict rules for the use of kimonos, masks, music, and even the stage itself.

In the space of twenty years they managed to completely transfigure the ancient and popular yet boistrous Sarugaku into a refined art aimed at the Japanese military and political elite. Masks have always played a dominant role in Japanese culture. At approximately 20 cm high, Noh masks are sculpted from cypress wood that is then covered with a layer of white paint on to which the masks’ characteristic yellow is applied. Black ink is then used for the eyebrows and the hair. All of this is then covered with a very thin layer of lacquer. The eyes are thin slits, making it hard for the actor to see. By now you may be curious about this intriguing art and wish to attend a performance yourself. It so happens that one will take place Christ Church in London’s Spitalfields on September 7th at 6.30pm and at St Bartholomew in Orford, Suffolk, at 3pm on September 9th. Actors and musicians from Tokyo University of the Arts will perform Sumidagawa [The Sumida River], a 15th century play by Kanze Motomasa. As a ferryman is taking on board passengers to ferry across the Sumida River, a woman appears, wracked with pain: she is looking for her long lost son. The ferryman tells her that the pilgrims across the river are praying for a little boy who died just a year before and the mother soon finds herself standing over her son’s tomb. As she prays, she thinks she sees the child’s ghost, but the shadow disappears at dawn. Did the mother really see her child? Sumidagawa will be followed by Curlew River, an adaptation of the same Noh play, composed by Benjamin Britten, with a chorus of British singers. The soloists and instrumentalists are from Tokyo University of the Arts, and the music director is Dominic Wheeler. Curlew River embodies an unconventional fusion of music and drama with elements borrowed both from Japan and medieval English mystery plays. Not to be missed!