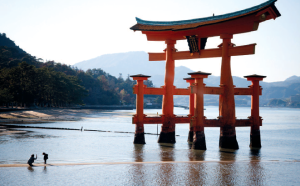 Out at large from Hiroshima, a site registered as UNESCO World Heritage will make you picture-crazy.

By choosing to write about Miyajima in the main column, the next question is what picture to choose for the opening. The island facing Hiroshima is so beautiful that the choice was far from easy. Even the worst of photographers can take decent pictures of the place, as if protected by Gods requiring that all pictures be worthy of the island’s beauty. Indeed, Miyajima is a sacred place for shintoïsm that Japanese have been travelling to for centuries, before mass tourism turned it into a gigantic open-air tourist shop. According to the shintoïst religion, a sacred area is identified as such by the presence of torri, an arch that symbolically marks the separation between the physical world and the spiritual world. Miyajima’s is impossible to miss because of its size and its position in the sea. That is why the picture of this beautiful torii seemed obvious an obvious choice to illustrate the beginning of the article. It is also a very symbolical way to carry you away to this place that is registered as UNESCO World Heritage since 1996. The view only of this impressive torii is worth the visit, even if you don’t have time to see anything else on the island.

When the sea is high, it looks like its floating. It is divine. What more to say about Itsukushima’s sanctuary (6:30 am – 6pm, 300 yens), right behind this gigantic portal? Built on stilts, the beautiful building floats on the sea that transforms it into a beautiful red orange boat at high tide, contrasting with the dark tints of the water. And if you’re lucky enough to have the sun shining on this large edifice, it will be sufficient to fill a whole photo album. Its beauty comes from its plain architecture that adapts perfectly to the surrounding natural environment. It is said to have been founded in 593, but most buildings that compose it were built six hundred years later by Taira no Kiyomori who was the region’s governor. It is easy to understand why he chose this place that nobody could ever get tired of. There are many visitors. They sometimes come by ferry from Hiroshima after a short crossing of the inland sea’s calm waters. The symbiosis between all elements contributes to giving the location its magnificence that some compare to the Mont-Saint-Michel. And as a matter of fact, both locations are twined and the visitor is informed of that as soon as he hits the terminal. Further away, after have passed Itsukushima’s sanctuary; the visitor will come face to face with a shop humbly called Saint-Tropez. It is also true that Miyajima’s climate is closer to the French Riviera’s than that of Cornish Coast. But it’s the only point in common between both regions, because in spite of its charms and its history, Saint- Tropez can hardly compete with the Japanese Island’s bewitching beauty. As it is often the case in the archipelago, spring and autumn are the two best seasons of the year to visit Miyajima. Temperatures are mild, rain is scarce, and the often azure-blue sky brings out the vermillion of the sacred buildings. But Kangensai festival goes on during the summer, and it pays tribute to sacred music with a stream of decorated boats that sail under the impressive 52 feet high torii. This festival takes place between the end of July and the beginning of August, according the lunar calendar. Although the island was used for residency at different times in history, today it continues to be a sacred place where ceremonies such as shintoïst weddings can be seen. The sanctuary is dedicated to God Susanoo’s three daughters, whose eldest, Itsukushima, is Goddess of the sea. Its appellation suits it perfectly, and she insures its protection, presumably delighted to have given her name to such a beautiful structure. Spreading over approximately ten feet, the sanctuary is composed of several buildings linked by bridges and galleries that invariably encourage the visitor to look towards the sea and it’s majestic torii. One realizes how big it is when from a distance, especially at low tide when hundreds of people get closer to it to take pictures and leave a few coins with a wish. Past the sanctuary, one can turn back towards the terminal, and meet wild deer (like in Nara), they aren’t shy and are always happy to snack on something. In fact, they love paper, so be careful you don’t have any showing.
Nevertheless, it’s a better idea to continue the visit of the island. There will always be time to bump into greedy wildlife. Behind Itsukushima’s sanctuary is a little path that leads to the Daishô-in Buddhist temple. All the way up to this religious building is lined with numerous statues whose sometimes surprising expressions may also delight photo amateurs. Do take the time to enjoy this little walk up that will lead you to a terrace with a beautiful panoramic view. And if you’re lucky, you may get to see a monk praying to the sound of his drum, a unique moment in a truly enchanting atmosphere. But this is just a side dish, substantial and sufficient indeed for a reasonable tourist. Although there is also a main course: climbing Mount Misen, the highest peak of the island that can be reached by cable car (9:00 am to 5:00 pm, 1000 yens for a one-way, 1800 yens for a return ticket). It takes twenty minutes to walk to the cable car’s departure, but you will not be the only one waiting in line to see the beautiful view from Mount Misen. You can count up to a two-hour wait before taking board in the cable car for the fifteen minute ride up. It is better to start with this visit early in the morning; you may want to give up later in the day. Ideally, you could spend a night on the island in order to be there before the mass of tourists’ arrival. Several hotels offer different prices according to the view they offer, of the sea or not. Obviously, when you’re in such a heavenly place, it is advisable to plan a higher budget than for Hiroshima where one may settle for a more ordinary hotel. Amongst the addresses to know on Miyajima, Kinsuikan offers luxurious rooms with a view on the torii (starting at 18 000 yens a night, diner and breakfast included). Miyajima Grand Hotel Arimoto doesn’t have much to envy either with its 400 years of history and its outside baths (starting at 18 900 yens, diner and breakfast included). Last but not least, the Benten No Yado Itsukushima offers a bath with a panoramic view that justifies the price, as well as delicious cooking with local oysters (starting at 15 750 yens, diner and breakfast included). Those are yet again more great occasions of taking wonderful pictures, whether at dawn or dusk.