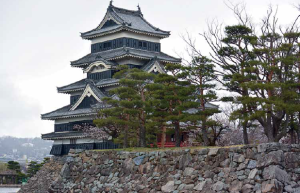 Located in the heart of the Japanese Alps, this city is home to one of the rarest gems of military architecture.

“Matsumoto, Matsumoto, Matsumoto” sings out a woman’s voice in welcome as you step off the train in this town nestled at the heart of the Japanese Alps. The city has many attractions. Besides the beautiful mountain landscape that surrounds it and invites you to explore, the city is home to one of the most beautiful castles in the country, which luckily survived destruction towards the end of the 19th century when the authorities decided to erase all traces of Japan’s feudal past. In 1872 the building was auctioned off for demolition, but thanks to Ichikawa Ryozo and the local inhabitants, it was saved and bought back by the town. It also survived the bombing in the Second World War, as its mountain location and the fact there was no significant industry in the city meant it did not warrant the attention of American B-29s.

If there were just one reason to visit Matsumoto, it would be the castle. Just the fact that it escaped the destructive impulse of man does not make it an exceptional site though. What makes it extraordinary is a combination of many factors. Known as “Crows Keep” (Karasu-jo), the fortress earned its name because of its black colour, in direct contrast to the “White Heron”, or Himeji castle, which has served as a backdrop for many historical films. However, unlike most hillside castles (yamashiro), the castle at Matsumoto was built on a plain (thus technically making it a hirajiro), but in addition to the plain, a river also surrounds it and protects it from invaders. To breach the castle and cross the moat, it is first necessary to cross a red bridge built in the Japanese style, which adds elegance to the structure as a whole. Considered to be the Japanese equivalent of the Taj Mahal because of its proportions and architectural beauty, there is no doubt that it is one of the finest examples of Japanese architecture and the dungeon (tenshu) is even listed as a National Treasure of Japan. A visit to the castle should not be limited to strolling round outside though. A number of Japanese castles aren’t worth entering, but a tour of Matsumoto’s castle interior is essential. The steep stairs make it a strenuous climb but all six floors are well worth the effort. Before entering, you have to take off your shoes and put on some slippers, which do not take the size of most European feet into consideration, so you need to take great care when climbing the very steep stairs. Every floor has its own surprises but most impressive of all is the view over the town and its surroundings, best enjoyed from the top floor. A large collection of weapons and everyday objects are also on display, and there are even explanations of their use in English – not always the case at other historical sites across the country. You can also count on information from volunteer guides, who explain the castle’s history since its foundation in 1504. Nothing remains of the original fortress built when the Takeda clan was on the rise and buildings still standing today date back to 1593-1597 and were built on the orders of Ishikawa Kazumasa. During its construction, the architects had a stroke of genius and created an extra floor invisible from the outside, where the guards could remain hidden from attackers. They also built a room from where the emperor could admire the moon (Tsukimi-yagura), lending a poetic touch to this place so well loved by the Japanese. After visiting the dungeon, don’t forget to check out the gift shop, which stands out from its competitors at other historical sites with a large and original choice of souvenirs.

Depending on what time you’ve set out to see the castle, you might decide to have lunch in one of the many restaurants close by. Quite a few have soba (black wheat noodles), one of the local specialities, on their menus and they are all very tasty. However, if you’re in a hurry, you should meet up at the Arupusu restaurant (Alps, 3-1-13 Asama onsen Matsumoto, 0263-46-1471, open 11.30 to 15.00 and from 17.30 to 21.30), a twenty-minute bus ride away from Matsumoto railway station. The restaurant is a little bit out of the way, but the great experience won’t make you regret your choice. Prices are very reasonable – 3,000 yen per person. Asama Onsen can also offer you the opportunity to take a bath. The hot spring is one of the oldest in the country and has been active for more than 1,300 years. The hot 50°C alkaline water springing from the bowels of the earth is famous for being a “beauty elixir”, but it has also earned a countrywide reputation for its therapeutic qualities. People come to the baths to relieve neuralgia, muscular aches or joint pain, stiff shoulders, bruises, digestion troubles, poor blood circulation, or overcome fatigue. A number of hotels are available at Asama Onsen. The Fuji no yu (15-5, Asama Onsen, Matsumoto, tel. 0263-46-1516, 12,600 yen per person, meals included) is recommended. Its service is flawless, its exterior baths and fine cuisine are much appreciated and should win your approval.

About 10 minutes away from Matsumoto railway station by taxi (the most practical option), is the Nihon Ukiyo-e Hakubytsukan or the Woodblock Print Museum (2206-1 Koshiba, Matsumoto, 0263-47-4440, open 10.00 to 17.00, closed Monday, 1,200 yen). This institution houses the amazing Sakai Collection, acquired by a wealthy family from the area who spent a fortune acquiring prints. The family founded the museum in 1982 with a collection of more than 100,000 items, which are displayed in rotation. Regretfully, information in foreign languages (English) is limited, but this inconvenience is soon forgotten after visiting the small shop selling beautiful reproductions at reasonable prices.

Another place to go shopping, while at the same time discovering the town’s history, is Nakamachi-dôri. Close to the castle, this long street is made up of completely renovated ancient houses offering many retail outlets. Originally, this was the merchant district where one could find producers of sake and kimono makers. The fires that raged through the city in the 18th and 19th centuries destroyed the buildings, and they were rebuilt in the kura style for storing goods, using better fire resistant materials. They are characterized by their whiteness. All sorts of shops can be found – from traditional cake shops to pottery sellers, and teashops. If you’re around on Saturdays, don’t forget to go to the market that is held from 9.30 am onwards from April to December. You might also want to stop at the small Nakamichi Shrine, home to the local deity that protects the neighbourhood. She is said to have prevented the fires from destroying the town. A festival in her honour is held every year on 1st July. It’s now time to board the train once again to discover the other wonderful things this mountainous area of Japan has to offer. All around Matsumoto, the mountain peaks invite you to join them.