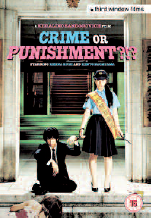 People often say that the Japanese do not enjoy laughter and that they are always serious. However, just like in any society, laughter often arises in everyday life. People may laugh at different things in Japan to those we do in the West, but it is laughter nevertheless. The Japanese cinema is no exception and contrary to popular belief, Japanese film production is not limited to genre movies (yakuza, samurai) or to the independent movies shown in most festivals. Comedies do exist, although they may seem a little complicated to us Western viewers. However that is no reason to ignore them. Third Window takes risks by producing movies such as Crime or Punishment?!? by Keralino Sandorovich. The plot is a somewhat complicated, but you will easily get used to the absurdity and the numerous sequences that leading the characters into hilarious situations. Namuri Riko makes a great portrayal of a failed model, Enjoji Ayama, who becomes a police officer for a day. The movie is a little jewel and will give as much pleasure as any of Kurosawa’s films, but with laughter thrown in.