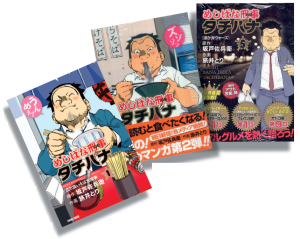 This is a story about a talkative cop who likes to eat, but most of all loves to talk. It is to be consumed enthusiastically…

Published in the popular weekly magazine Asahi Geino that covers Japanese show business, Meshibana deka Tachibana [Detective Tachibana’s food stories] is gaining a following among food lovers. Detective Tachibana’s round, greedy face encourages the readers to taste and share the delicacies he describes. Tachibana is a chatterbox. Whether he is with his colleagues or with a suspect, he always starts to recount stories about the origins of this dish or that. However, be warned, refined cuisine is not Detective Tachibana’s thing. This is a story about working-class food, everyday dishes of the kind that you might eat in small restaurants near railway stations. The first story of the 5th volume, released last April, is about makaroni sarada [macaroni salad], a very simple everyday dish. Our friend Tachibana embarks on a scientific description of the best way to prepare this recipe and dumbfounds his colleague, leaving out no detail, even down to the point of comparing the price of macaroni in various grocery shops. Readers like his joviality but that is not all. In its 2012 edition, Kono manga ga sugoi ranked Meshibana Deka 9th among the best manga of the year, which has given it a whole new popularity. It is part of the growing trend for manga that focus on food, this genre taking up an increasing amount of space in bookshops. In Japan, these kinds of comics are called “gurume manga”, meaning gourmet comics, although Meshibana deka Tachibana is not really what you could call a story for true gourmets. The main character eats very little but his first mission is always to describe what he is about to eat, or what he would like to find on his plate. He does not describe the ingredients in minute detail, but rather the pleasure he takes in eating. Tabii Tori’s drawings capture these moments perfectly and highlight Tachibana’s facial expressions of gastronomic pleasure. Another reason for its success is the detective’s straightforward approach. He is neither a gourmet, nor an ace chef but is a character that many ordinary Japanese can identify with. It is easy to feel close to him, because of the uncomplicated way he describes his favourite dishes, even instant noodles. This lovable loudmouth succeeds in convincing the reader by tempting him with various dishes. Such an unpretentious approach to cooking may reassure many readers who, these days, lack the means to eat any differently. This could also explain why this manga was chosen to appear in a popular magazine.The recognition he received from reviewers encourages us to believe that Detective Tachibana will be around for quite a few years to come, amusing his readers with his funny facial expressions when confronted with small plates of food. That is what both Japan and its manga can offer, a surprising blend of invigorating stories to bury oneself in and awaken an appetite for more. Reading clearly encourages a good appetite!