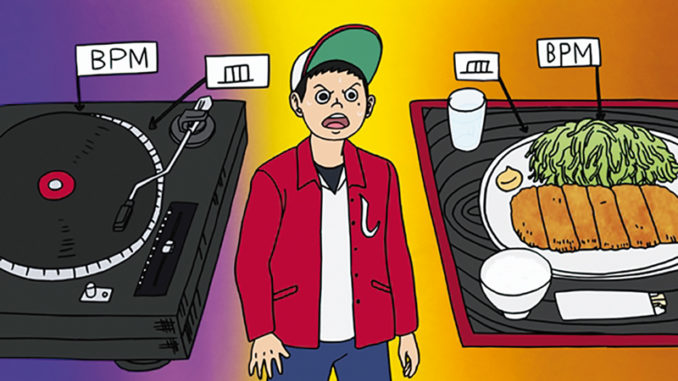 Dance music and tonkatsu: an original combination which many manga and anime fans are going mad about.

Young Katsumata Agetaro is the thirdgeneration heir-apparent of a Shibuya tonkatsu restaurant, but lacks the enthusiasm to follow in his father’s footsteps; so much so that his contribution to the family business is still limited to shredding mountains of cabbage and acting as the delivery boy. One day though, he stumbles into one of the many nightclubs in the neighbourhood and soon discovers that there are odd similarities between… tonkatsu- making and DJing (e.g. similar rhythmic moves that make the same kind of sounds).

If you think that dance music and deep-fried pork cutlets make for a very odd combination, rest assured that you’re not alone. The amazing thing, though, is that manga and anime fans seem to like it a lot. Originally created by author Iipyao and artist Koyama Yujiro, Tonkatsu DJ Agetaro features lots of gags, interesting characters and an art style closer to underground comics than the prevalent manga style.

Agetaro was first serialized in comic publisher Shueisha’s new Shonen Jump+ app. Shortly after its online debut, a strip from the comic went viral and the manga itself became such a success that director Daichi Akitaro (“Sexy Commando Gaiden: Sugoi yo!! Masaru-san”, “Animation Runner Kuromi”, “Nurse Angel Ririka SOS”) was asked to turn it into an anime for Studio DEEN.

Like the original manga, each ten-minute-long episode has a rather psychedelic visual style and is packed with great dance tunes penned by MU-STARS’ Fujiwara Daisuke. This is definitely one of the most unique new works coming out of Japan and in April it was even honoured with a DJ event at Womb, one of Shibuya’s main dance clubs. Zoom Japan was lucky enough to catch the everbusy Daichi-san for a quick interview.

How did you get to work on Tonkatsu DJ Agetaro?
DAICHI Akitaro: It all happened very quickly. I was actually busy working on another project when I was told I had got this new job, and I hadn’t even had the time to read the original manga. To be frank, I didn’t really think such a story would be made into a manga, so I was quite surprised, but when I finally got to read the story I was very impressed. I had never seen anything like that, and the idea of working on it got me fired up.

What impressed you most about this story?
D. A.: First of all, I didn’t expect it to be a gag manga, especially considering its content. Also, I didn’t really understand what the characters were saying. I had never heard many of the DJ-related words. But I was immediately attracted by the world of DJing, which I didn’t know very well. It’s true that there are a lot of gags, but at the same time, both DJing and cooking are treated seriously, with great attention to detail. Koyama-san told me that he originally wanted to create two characters, a tonkatsu maker and a club DJ, but eventually decided that would be too complicated and merged the two guys into a single character. Another interesting thing about Agetaro is that for a manga of this kind there are a surprising number of facial expressions and a lot of movement. My team and I quickly got excited about working on this story. 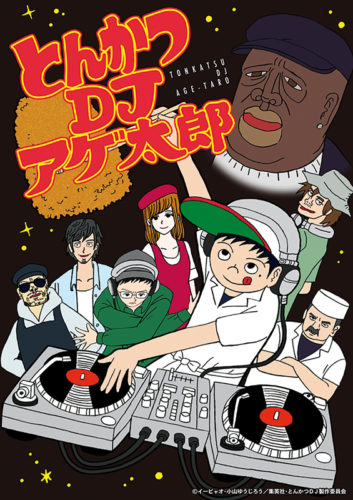 What did you find most difficult about animating this manga?
D. A.: First of all there’s the musical element. Music plays such an important role in the story that since the very beginning we worked closely with our music editor in order to choose the right music for each scene. But dance music aside, the soundtrack features many small but important details such as the sound of passing trains and even bubbling oil. We all went to Sugita (a famous tonkatsu restaurant near Asakusa) to experience it firsthand. We actually recorded it like DJ Oily (a prominent character) does in one of the first episodes. As it turned out, it barely makes any sound. So when we animated this scene we had to exaggerate the effect a little bit. To make sure, in the manga they have added a note saying that “the actual frying noise varies depending on the restaurant!”. Another thing that we found difficult to get right was the atmosphere inside the dance clubs. It was quite hard for me because I wasn’t sure how faithfully I could reproduce that particular feeling, Luckily, people seemed to really like the first few episodes, so I guess we have done a good job so far.

Was it difficult to adapt the manga’s visual style?
D. A.: Yes, there were a few issues. First of all, Koyama-san likes to alternate panoramic views and close-ups, so he draws lines of different thickness – three kinds of line, actually. Then we had to decide how faithfully to reproduce the Shibuya cityscape where the story takes place. That’s why we visited all the locations that appear in the manga in order to decide what approach worked best.

I wonder why Koyama-san decided to devote his story to tonkatsu and DJing – a rather strange combination, you must admit.
D. A.: Actually, his original idea for making this manga was to tell a story featuring Shibuya and young urban lifestyles. Now, when it comes to Shibuya, the three hippest professions are stylists, clothes’ shop assistants and DJs, so he chose to focus on them. That’s a curious choice because Koyama-san confessed he had only been to a dance club once before starting drawing Agetaro. It was the same for me. I’d only been to a club during the disco era several years ago, so in order to make this anime the whole staff went clubbing more than once in order to get the real feel. We had a lot of fun!

How about tonkatsu?
D. A.: Apparently Koyama-san made tonkatsu for the first time at his grandmother’s home last year.

Speaking of Shibuya, the manga’s back cover features a map of the district where Agetaro’s adventures take place. Is the tonkatsu restaurant a real place?
D. A.: No, not really. But there are a few old buildings in Shibuya that are actually quite similar to Agetaro’s restaurant. Same thing for the club. What you see portrayed is actually a composite of several places in Shibuya.

Why do you think such an unusual manga has become so popular?
D. A.: Readers love coming-of-age stories where the protagonist has to overcome many obstacles on the way to success. Agetaro is, in this respect, quite similar to such manga as “Slam Dunk” and “Beck”. This is also a story without any bad guys. You have a series of quirky characters, but all these oddballs are quite lovable in their own way. The protagonist himself is very focused in his quest to master both the art of DJing and tonkatsu-making. He’s a 20-something who looks and thinks like a middle school kid, and he has a very positive attitude. When you think about it, this is a typical feel-good story.

What sort of impact has working on this anime had on your life?
D. A.: Now I’m eating tonkatsu all the time… and I’m careful to avoid any place where I can’t hear the sound of bubbling oil. But as soon as I’m finished with Agetaro I’m going back to my beloved gyoza!

One last question: Do you have a favourite tonkatsu restaurant?
D. A.: There used to be one, but unfortunately it closed down a while ago. I was shocked when I found out, but then I heard that the owner had decided to quit his job because he couldn’t get hold of his favourite pork anymore. He said, “If I can’t offer my customers the best tonkatsu, I’d rather quit.” Isn’t that cool?!

REFERENCE
Unfortunately an english language version of the manga “Tonkatsu Dj agetaro” is not available yet, but the anime version can be viewed with english subtitles at: http://myanimelist.net/