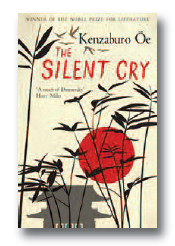 Mitsu is the narrator. He is twenty-seven years old and the father of an abnormal child, like his sister who committed suicide before she reached adulthood. Mitsu never gets over the suicide of his best friend. It is a recurring image throughout the novel. Taka, Mitsu’s younger brother, is back from the United States. He advises his brother to start a new life and return to Shikoku, their home village, in the south west of Japan. Taka hopes to follow in the footsteps of one of his ancestors: his great grandfather, who was leader of the farmers’ uprising in 1860. The brothers’ great grandfather was not a farmer but a village administrator. Taka wins over the village’s population when he starts up a football club. In Kenzaburô Ôé’s novel, winner of the Nobel Prize for Literature in 1994, all the main themes of Japanese culture play their part: suicide, the relationship of man to nature, forests, snow, racism towards the Koreans, alcoholism, music, dancing with the dead. It is quite a disconcerting, difficult novel. Its atmosphere is harsh and violent, yet interesting because it tells the story of Japan, its history and mysterious legends, while depicting an imaginary world that is dear to the author. This is a novel to be discovered, or rediscovered.