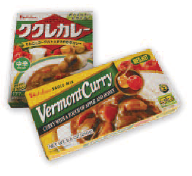 Curry took a roundabout route into Japan. Arriving via the British navy at the end of the 19th century, when India was still part of the empire, it was seen as a Western dish. Served with steamed rice, and a pickled daikon garnish, the classic Japanese curry is made with beef, onion, carrots and potatoes, though chicken, pork katsu cutlets, or even cheese can be used. Initially seen as a luxury, it became a household staple after the Second World War with the introduction of curry roux (blocks of curry powder, mixed with flour and oil). One of the biggest manufacturers of these is House Foods, and one of their most popular brands is Vermont Curry, first launched in 1963, with a sweet flavour, and three levels of spiciness. To cook, brown the meat and onions, add the vegetables with water, simmer until tender, then add the roux. The number of blocks needed depends on how much you’re making, but they should dissolve completely in the water creating a thick, rich sauce. It’s incredibly easy to make, and perfect for big family meals. But if this still sounds like too much work, House also sell instant varieties.