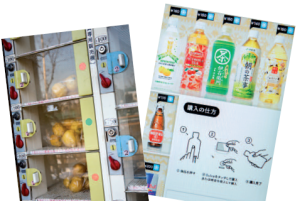 The country’s modernisation at the end of the 19th century coincided with the introduction of the first vending machines. Since then, they have become a very important part of everyday life.

The first vending machine in Japan dates from 1876 when Ueno Park in Tokyo was opened to the public. An article published on the 19th of March in that year, in the Tokyo Nichinichi Shimbun, the precursor of Mainichi Shimbun, recounted how visitors could buy their newspaper from a machine for 3 sen (100 sen = 1 yen). Although it was still a curiosity for the people of Tokyo at the time, that machine marked the start of a long love affair between the Japanese and their vending machines. These progressively became part of everyday life, without their presence ever being called into question. The oldest machine still in working order dates back to 1904. It dispenses stamps and post cards and was made by Tawaraya Takashichi who went on to create many others throughout his life. The spread of these dispensers was also due to the development of the railway system in the archipelago. The railway companies were quick to realise how useful those machines would be in their stations to facilitate ticket sales. In 1911, the first automated ticket machine of its kind was installed in Osaka’s Umeda station, at the time the joint most important station in the country alongside Tokyo’s Shinbashi. A little more than a century later, underground stations and railway stations are all equipped with increasingly more sophisticated machines. Reduced price ticket machines offering a 17% discount were recently installed along the Hokuso line run by Keisei railways, whose high ticket prices have previously been the cause of much passenger dissatisfaction. Due to their success, it should not be too long before others appear. However, it is the dispensing of drinks that has become the essential use for Japan’s vending machines. Before fizzy drinks, sake was the first drink to benefit from this innovation. What seems to have been the first sake dispenser was discovered in 1987 in Ninohe, in the north east of the country. Since its conception sometime between 1910 and 1920, this machine’s offspring have now multiplied to number some 2.5 million automatic drink dispensers throughout the archipelago. Fruit, books, hot and cold drinks, umbrellas, toys, fermented soya and tofu, practically anything can be bought from vending machines. As well as providing extra sources of income, vending machines allow retailers to enlarge their range of products.