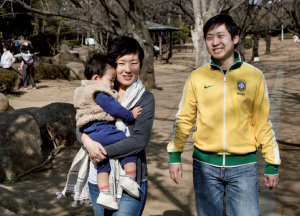 To start a family and have children isn’t an obvious choice in Japan anymore. Zoom Japan investigated.

What does being a parent in Japan mean nowadays? We asked several Japanese families. Do they find that difficulties for young parents are increasing? And what do they consider to be easier for them than for previous generations? In this country with decreasing numbers of young people, where the number of pregnancies has been falling since the seventies, what contributes to encouraging the Japanese to start a family? Two years after the earthquake of March 2011, has its aftermath changed the situation? The archipelago has recorded its lowest birth rate since 1920, with an average growth of 0.20%. If it carries on this way, Japan’s current population of 130 million can expect it to reduce by half by 2100. On the 1st of January 2012, Japan’s birth rate was 8.39 per 1,000 residents, a total that places the country in 216th position in demographic terms worldwide. With 1.37 children per woman (an average of 1.06 in Tokyo), the number is much lower than the tipping point of 2.1 necessary for continued population renewal. In January 2012 a study undertaken by the National Institute for Demographic Studies underlined the dramatic and urgent character of the drop in birth rates. This reduction means the number of people over 65 years old will increase from 23% to 40% of the population by 2060, while the percentage of young people will be halved, with a decrease from 13% to 9%. This situation is a threat to the Japanese health system.

The labour force is shrinking and cannot support the increasing number of elderly people. What are the reasons for this haemorrhage? It is largely due to a society that is evolving and rapidly changing. Women are becoming increasingly emancipated and wish to study and work before thinking of marriage and motherhood and it is still difficult to reconcile these choices in Japan. Although perceptions have evolved since the 80s, on becoming a mother, a woman no longer has a place in traditional Japanese business life. Organising childcare is also her responsibility and the lack of support is an additional difficulty for women when they go back to work after their maternity leave. Another important change has to do with the fact that people are getting married later and few children are conceived outside marriage, only 3% in Japan, compared with more than 50% in France and approximately 40% in the US. Children present an obstacle in reaching a certain level of financial comfort, as the costs of pregnancy and education are very high. Last but not least, among the families we met, several of them confessed to being worried at the idea of starting a family in such an uncertain economic climate. Figures show that in 2011, the year the earthquake took place, the rate of population growth fell to a new low since the annual census was established in the 50s.

In an attempt to understand the situation, Zoom Japan met four Japanese women: Kuromoto Kana, Ida Tomoko, Watanabe Junko and Kusano Mie. These mothers agreed to tell us their stories and their experiences of motherhood in the context of Japanese society today, with its difficulties, its joys and its fears. “We have to admit that the government actively encourages us to have children” say Ida Tomoko and her husband Andre. “We benefit from the kodomo teate for our son, a 15,000 yen [£103] allowance per month until Lukas’ fifteenth birthday”. On the birth of a baby Japanese parents are entitled to this grant totalling 42,000 yen. The payments decrease as the child grows older. They receive 15,000 yen per month until the child is three years old, then 10,000 until the age of fifteen. In the 70s the allowance was worth only 3,000 per child. But it is still “an insignificant amount of money when you count the cost of childcare compared to the hours parents have to put in at work,” says Kuromoto Kana. “Day nurseries close at 7pm at the latest. After that, there is no other solution if your parents don’t live in the same city,” Ida Tomoko adds. “I work full time in the textile industry. I often get off work at 9 or 10pm. I need to organise for Lukas to be looked after when the nursery closes”. Her husband Andre, who works in computer sciences, rarely gets off work before 1am. For this couple, as for others in Japan, it is the mother who juggles with her timetable and who gets back home in time for the children. The tradition of the full time working father persists. Yet ideas are changing. “I believe I am quite lucky,” recognises Kuromoto Kana. “My husband helps me with everything at home, the nappies, the bathing, the walks. Things used to be different in Japan”. Japanese media call these men ikumen, those who both work and help in the household. This new generation of men that actively takes part in the children’s lives at home has been a growing phenomenon for some years.

The government encourages these initiatives with seminars for fathers who have too little time for their children. Since 2008, fathers have been allowed to take paternity leave. But Watanabe Junko has strong opinions about this. She believes that the drop in the Japanese birth rate is first and foremost a problem related to men’s education while they are still children. For this reason, she preferred to marry a foreigner. In 2008, 37,000 Japanese married foreigners, which is eight times more than forty years ago. “I believe that men today identify with the soshoku kei danshi generation. Men are more feminine and wait for women to ask them out. The Japanese men want to get more out of life and have fewer responsibilities. As for women, they are gaining in independence, they don’t need men financially anymore. They have more power”. The last person we met, Kusano Mie, has never had any children of her own. We still felt we should tell her story. In her own way she represents the “maternal heart” of this article. Originally from Fukushima, her maternal instincts overwhelmed her after the tragic events of March 2011. Concerned for the future of Japan, she left the US where she was living with her husband and returned to the region of her birth to help the children who had been uprooted from their homes and cities as best she could, using all the means at her disposal. “I believe the fear of contamination is going to add to the financial problems that young Japanese families are encountering,” she says. All these women lived through the experiences of motherhood during or right after the March 2011 event, an event that recurs in every one of these accounts of their lives. They all experienced the earthquake very differently and they have all agreed to tell us their stories.