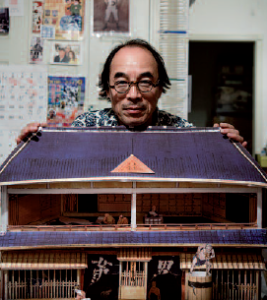 Machida Shinobu has made a study of sento for the past 30 years. He knows all the secrets of public baths.

Taking a bath may be a very common and everyday experience, but one only needs to peer behind the curtain of a sento to discover a unique world full of fascinating people and stories. In order to hear some of them, Zoom Japan paid a visit to Machida Shinobu, arguably the foremost expert on Japanese public baths. Machida has studied the subject for the last 33 years and in the process has visited 3,200 sento around Japan. “The Japanese are particularly fond of bathing,” Machida says. “For us it’s not only a matter of washing our body; it’s a way to cleanse our spirit. That’s why we enter the bathtub only after cleaning our body”. Machida became interested in sento art and architecture after being asked by an Australian friend why the entrance to one near his house looked like a shrine. “Like most regular customers I had never noticed that particular feature,” he says, “so I began to research the subject, as I also wanted to record a part of Japanese culture that was at risk of disappearing without trace”.

This is actually a real danger as Tokyo’s sento are closing down at a rate of one every two weeks, while the national average is one a day. “They peaked at 2,600 in 1968, but currently there are only 700 left, concentrated in the traditional working-class districts,” Machida says. “Nation-wide they are down to 4,000 from 18,000 in 1968”. Machida not only gathers information about sento, he also likes to get his hands dirty and once in a while paints the murals that adorn the main bathrooms of these establishments. “After helping the artists for 30 years I have begun to paint them myself,” he says. These giant artworks, called penki-e in Japanese, take up the whole background wall right above the main bathtub where the customers soak after scrubbing their body clean. According to Machida, the first one appeared in 1912. “The owner of Kikai-yu, a public bath in the Kanda-Sarugakucho district in central Tokyo, wanted to please the children who frequented his sento. So he asked artist Kawagoe Koshiro to brighten up the interior with a painting,” Machida explains. As Kawagoe was from Shizuoka prefecture, he painted Mount Fuji, which even today is by far the most common image you will find in a sento. “You see, Mount Fuji is a sacred mountain which brings good luck,” Machida offers. “Also, as the mural always stands directly over the bathtub, it gives the impression that Mount Fuji’s melted snow runs down directly into the tub. For the same reason, other popular subjects are streams and waterfalls”. This kind of interior decoration is a typical Tokyo feature and is rarely found in other regions. Penki-e artists only use common house paint in four basic colors (white, red, yellow and blue) that they mix to obtain all possible combinations. As most public baths are closed only once a week, a mural must be completed in just one day.

“Usually it takes about 2-3 hours for the artist to paint the new work directly on top of the old image,” Machida says, “but the whole process takes about 6-7 hours from start to finish. The most important thing is to get used to the wall’s size before starting to paint. Once you get started, there’s no time to go back and start all over again”. Nowadays penki-e can only be found in older sento built before the mid-70s, but they are gradually disappearing, together with the sento themselves, due to a lack of customers. “This is hard work, and doesn’t pay well, so nobody wants to do it anymore,” Machida says. “During the golden era, in the ‘50s and ‘60s, there were many such artists. Unfortunately only two are left now, both of them in Tokyo. One is 68, the other one is over 70, and they have no apprentices, so this traditional art will die with them”. The world of sento is full of puns, most of which have something to do with bathing and luck. “There’s a place in Osaka which features a couple of Statues of Liberty,” Machida says, “because the word “nyuyoku”, which means bathing, sounds like New York”. Some subjects are avoided at all costs because they are said to bring bad luck to the sento. “The word for monkey, saru, also means ‘to go away,’ so these animals are considered taboo because the owners don’t want to lose customers,” Machida says. “For the same reason we never paint a setting sun with autumn leaves, as the verb ochiru (to fall) has negative connotations in Japanese”. Other subjects that have recently disappeared are such popular pop culture icons as Mickey Mouse, Doraemon and Ultraman. “In the past, sento owners tried to attract more customers by painting popular characters, but they had to cover them up for copyright reasons”.