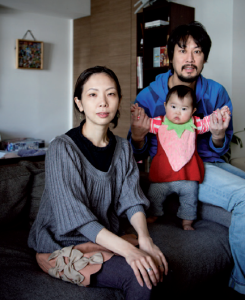 For the past few years, a new generation of fathers has been participating more in their children’s education.

Kuromoto Kana chose to call her daughter Chihiro, like the hero of Miyazaki Hayao’s famous animation. The dark haired child is sleeping in her cot. Her maternal grandfather, Miyao, stands proudly near his “first granddaughter” and gently pulls the cover up under her chin. Kana is 33 and she gave birth to Chihiro on the 14th of May 2012. She lives with her child and her husband in a small flat situated in Asakusa, a popular quarter in the northeast of the capital. Children’s toys are strewn across the apartment. The atmosphere is peaceful. “When I got pregnant, it was a surprise,” says Kana. “It was earlier than planned, but it was greeted with joy by the whole family.” At the time, the young woman was temping at a design company. Her husband, Hiroyuki, 39 years old, works for a printer of school textbooks. The couple has been married for three years. “Summer 2011 was very hard here in Japan,” recounts Kana. An energy shortage meant several festivals were cancelled, including locally in Asakusa, which is one of the biggest in the country. “I learned I was pregnant in September and I wanted to forget this difficult period completely. I wanted to view life optimistically, benefit from it, think of a better world for my child”. It’s a desire to leave this painful episode behind and make the most of the present; to turn a new page.

Hiroyuki, Kana’s husband, isn’t here today. “He works hard, and he often gets home late in the evening”. Nevertheless, it’s important to him to find time to see his daughter and take part in her education. “My husband tries to get home as early as possible. He finds it natural to help bring up our daughter. He also wants to spend time with her and help me. He bathes her, does the shopping and makes dinner, and he takes her out for walks. He even changes her nappies”. Hiroyuki isn’t an isolated case. For a few years now, a new generation of dads have sprung up in Japan, the ikumen. It’s a generation of fathers who make sure of getting home early enough to take care of the children. The Japanese government has noticed this trend over the past two years and is enthusiastically encouraging these initiatives. There even exists an Ikumen Project that supports these fathers and offers seminars to teach them how to best take part in life at home. The Japanese dad’s role is not just to be a financial support, it’s also to be active at the centre of the family and take part in the children’s education. In short; being present for the children as they grow up. The “iku” in Ikumen is derived from iku-ji, meaning children’s education. By rethinking the Japanese family, the mother has been accorded a new role. “I am going to be able to go back to work. My husband helps out a lot, so it will be easier to do now I don’t have manage everything at home on my own”. Kana will be able to go back to work at the company where she was employed before becoming pregnant. “The company I used to work for, a small Japanese business specialising in design, is offering to give me back my temping position. Because of my precarious situation, I still don’t have the same rights as other employees. On the other hand, I work set hours. That will allow me to collect my daughter from the nursery in the evening”. She doesn’t question the situation as taking her husband’s timetable into account, she says that she “can only have this kind of temporary job. But I’m not too bothered by it. My motivation in going to work is essentially financial. I don’t really have any long-term career project. I have to admit that if I worked in a company that was equipped with a nursery, so that I could sometimes see my daughter, I probably wouldn’t talk about my career ambitions in quite the same way”. With both their salaries and the government allowances (kodomo teate), Kuromoto Kana believes that “it’s sufficient to bring a child up in Japan. On the other hand, it isn’t sufficient for a parent bringing their child up alone, or to have a second child. For this reason, my husband and I can’t imagine having a big family. Nor even having a second child, it would be too difficult financially. But who knows, with time, we might change our minds”.