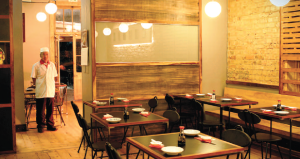 The Agency for Cultural Affairs plays a key role in defending Japanese cuisine. We interviewed one of its directors.

By the time this issue of Zoom Japan comes out, the eighth session of UNESCO’s Intergovernmental Committee convened on the 2nd – 7th December in Baku, Azerbaijan, should have recognized Japanese cuisine as an Intangible Cultural Heritage of Humanity. “Washoku” as it is called in Japan, would become the fifth cuisine to be included in this exclusive list, joining French and traditional Mexican cuisines, the Mediterranean diet and the ceremonial Keskek tradition in Turkey. Zoom Japan discussed the matter with Shiokawa Tatsuhiro, Director of the Office for International Cooperation on Cultural Properties of the Agency for Cultural Affairs.

Why did the Japanese government decide to apply, and what are, in your opinion, the main reasons for recognizing washoku as an Intangible Cultural Heritage?

Shiokawa Tatsuhiro : Japanese food culture have great characteristics. First of all, the Japanese archipelago extends from north to south through very different geographical areas and historical traditions. As a consequence, Japanese cuisine has a great regional diversity based on many kinds of seafood, vegetables and edible wild plants. Japanese cuisine is based on fresh, local and seasonal ingredients (e.g. bamboo shoots in spring or chestnuts in autumn) that are used without a lot of unnecessary seasoning in order to preserve their natural taste and flavour.

The idea of “respecting nature” features prominently in your application to UNESCO. What do you mean by that?

S. T. : Washoku encourages the sustainable use of natural resources. For example, preservation methods involving drying and pickling natural ingredients to avoid spoilage and extend their use are well developed. Such multi-use strategies that maximize the value of various ingredients are expressed by the word “mottainai” (care towards wastefulness) that is often used in every aspect of daily life and is aimed at building a sustainable society.

Japanese cuisine is also famous for being healthy, isn’t it?

S. T. : Yes, nutritional balance is another important element. Indeed, the Japanese have a long life expectancy and widespread obesity is not really a problem here. We strive to transmit these values to the younger generation. You can see it in the meals we prepare in our elementary schools. They often include local dishes that vary according to the seasons. It is also true that the ubiquitous convenience stores are changing our eating habits for the worse. In a sense they are too convenient, and working people are so busy that they all too often stop cooking at home and just buy a lunch box or some other packaged food. That’s why it is essential that we educate our children about the importance of eating properly, even though cooking takes time. For example, in the past junior high school boys didn’t have to attend home economics classes; now they do. Even school menus have changed. Many used to serve bread at lunch but now they are reverting back to rice, which has traditionally been Japan’s staple food. After all, cooking is part of our culture and we are what we eat.

When did the Agency for Cultural Affairs decide to apply to UNESCO?

S. T. : Our proposal was officially issued last March but before that, the discussions within the government about the opportunity of doing this and how best to prepare our presentation took about a year. Of course, the Great East Japan Earthquake and Tsunami in 2011 had an influence on the whole process.

In what way did the events in Tohoku affect your discussions?

S. T. : There was no direct link between the two things, if that is what you mean. Of course there was a lot of talk about high levels of radiation, and Japanese exports of food were negatively affected, but that was of more concern for the Ministry of Agriculture, Forestry and Fisheries. Our bureau approached the food issue from a strictly cultural point of view. Besides, UNESCO always warns all applying countries against using culture as a means to pursue commercial or economic interests. That said, it’s undeniable that washoku’s inclusion in UNESCO’s list was seen as a way to cheer up the country in a period of great strife.

The Japanese government is considering the creation of a two-year visa which would allow foreign chefs to train at local restaurants in order to master washoku techniques. What do you think about this?

S. T. : I don’t know all the details because it is the Ministry of Justice that is in charge of visa matters, but obviously such a move would help greatly to spread authentic Japanese cuisine around the world. Right now foreign students are able to study at cooking schools, but this new visa is different as it would give foreigners a chance to actually work in a real restaurant. However, there are some conditions to be met. For example, before starting the two-year stint in Japan, applicants must prove that they have already secured a job in their home country. This is because we want them to be “Japanese food evangelists”. Also, we are selecting a number of regions in Japan which will be able to welcome the trainees. Talks are still in progress but one of them should definitely be Kyoto.