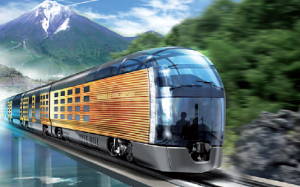 His railway creations are what dreams are made of. Okuyama Ken tells us more about his work and projects.

You can’t talk about Japanese train design today without mentioning Okuyama Kiyoyuki, or Ken Okuyama as he is known abroad. For many years Okuyama has worked with cars, as a chief designer for General Motors, a senior designer for Porsche AG and a design director for Pininfarina S.p.A., being responsible for such iconic brands as Ferrari and Maserati. However, after founding KEN OKUYAMA DESIGN in 2007, he has started a fruitful collaboration with the East Japan Railway Company for which he has designed many of the trains that travel through the north-eastern regions where he grew up. Okuyama was kind enough to share with us his opinions on the excursion train boom.

You are especially famous as a car designer, but in the last few years you have been particularly busy working with trains. As a child, which did you prefer to play with?

Okuyama Kiyoyuki: I loved both of them. Actually I grew up very close to Yamagata Station – almost inside the station – and I spent hours looking at all those steam locomotives in the shunting-yard. On the other hand, though, the first half of the 1960s was a period in which more and more people could afford to buy a car, and my family first got one when I was about five or six.

And as a designer do you find any difference JR East between designing a car and a train?

O.K.: Probably the biggest difference between a car and a train is that a factory makes some 3,000 cars a day of a certain model while the JR Group, which manages Japan’s railway network, only produces 70 or 80 of a new train series. Consequently, the materials used and the technology involved are vastly different. For example, moulds are commonly used in car-making, and most components can be easily found on the market, but when you make a train you often have to create from scratch, and many parts are actually hand-made. That’s okay if you only make one prototype, but when you have to multiply this process by 70 it becomes problematic. Apart from this technical aspect, though, I approach every project the same way, i.e. I always keep in mind the people who are likely to use a certain product, be it a car, a train, or even a piece of furniture or a pair of glasses. I use my imagination to put myself in their shoes, trying to guess their dreams, wishes and desires – especially their future needs because when we start a new project we must guess how the market is going to change in five years.

It must be quite difficult.

O. K.: It is, because it often happens that those who commission the project disagree with our ideas (laughs). So our work involves convincing these people that our ideas are good, and in order to do this we have to create a story or an entire world around the product itself.

O. K.: It all started a few years ago when we won consecutive contracts to design two new Shinkansen series, the Akita Komachi and the Hokuriku. These early successes allowed our studio to develop a privileged relationship with JR East. Traditionally, in Japan everything is decided by committee. This is not a very good system. Everybody tries to avoid taking responsibility and most of the time it only creates a lot of confusion. It’s much better to have one person with a clear vision, who can come up with good ideas and has the authority to implement them. My job involves meeting my clients, listening to their ideas and motivations, and then using these first few pieces of the puzzle to gradually develop the project. Quite often they don’t have a clear understanding of what they really want, so I have to pull out all the things that are hiding in their heads. This is a part of my job I really like.

You have mentioned some of your Shinkansen related design. These trains are all about speed and convenience, but now you are working a lot with so-called “excursion trains”. What is your opinion on the current luxury-trip boom.

O.K.: I’d like to draw a comparison with horses. Many years ago, they were our only means of transportation. Then, with the advent of faster, more convenient things like trains, cars and aeroplanes, they have evolved into something we use for sport or leisure. The same thing is happening to cars and trains. Now flying to our destination is often the cheaper and faster option, but when you ride a train you can enjoy the landscape while eating good food and spend a happy time with your family. This evolution has led to the popularity of the excursion trains, where the trip itself – the time we spend on the train – is the main thing. The other important thing is how we choose our destination. More and more people want to go off the beaten path and explore regions they have never been to, like Iwate in the north of Japan.

The SL Ginga is probably the most famous of the excursion trains you have created. What was it like working with an old-fashioned steam locomotive train?

O.K.:This was my first such project. We developed it around two themes. The first one is the steam locomotive featured in Miyazawa Kenji’s “Night on the Galactic Railroad”, which is one of the best known and loved stories in Japanese literature.
I first read this book when I was a child, and I found it very easy to understand, but when I took it up again while working on this project I discovered many things I hadn’t noticed before. It’s a very complex book with many hidden messages. The novel was written during the years between the Taisho and Showa periods (1920s), so we wanted to recreate the same retro atmosphere. Unfortunately, the train doesn’t feature a restaurant, but we were able to add a bar that seems to come directly out of Miyazawa’s story. We also wanted to do something that went beyond people’s expectations, so we added a small planetarium. In that sense, travelling on this train can be compared to visiting a theme park like Disneyland. The second theme is the Iwate region. The trip takes a little bit more than four hours, and takes the passengers through a gorgeously beautiful landscape. The problem is, the last part of the Hanamaki-Kamaishi route is rather steep. Now, going to Kamaishi is not a problem as the train travels downhill, but a stream engine can’t really make it on the way back, so we had to add a diesel-engine and turn it into a hybrid train.

I imagine this train has been a big boost for the region.

O. K.: Yes, of course. As you know, Iwate has been badly hit by the Tohoku earthquake and tsunami, and the people there are very happy that SL Ginga is bringing back tourists from all over Japan. This train turned out to be so popular that you have to wait six months for a chance to find a seat.

Another popular train you have designed is the Tohoku Emotion.

O. K.: In this case we have only designed the exterior, but have also participated in the brains- Okuyama Ken torming sessions concerning all major aspects of train design. I find the house-like exterior very interesting.

How did you decide on this design?

O.K.: Good food and fine Italian cuisine are this project’s main attractions, so we wanted to make the train look like a travelling restaurant. We have even added hand-drawn style touches to our design. This is actually a 2D rendition of the typical architecture you can find in Italy’s northwestern Liguria region. In fact, the Tohoku Emotion travels along Iwate’s coast, so it’s a little bit like being on Liguria’s famous Riviera.

This summer the E3 series Toreiyu excursion train will enter service. This is another original project with a traditional Japanese feel. One of the cars features two crimson bathtubs divided by wooden louvered screens, and when you are finished you can move to another car with tatami mats and cherry wood tables. How did you come up with the idea of the foot bath?

O. K.: We usually start with just a few ideas and gradually add more pieces to the puzzle through brainstorming. The idea of installing bathtubs is not new, but until now everybody thought it couldn’t be done. However, with our technical knowhow we were able to arrange things in a certain way and make it possible. Water temperature is kept constant, and there is no danger of the water overflowing, even in case of an emergency stop. Our job is to take care of all these details. When you are too close to something you can only see one side of the problem, but we have the advantage of looking at a project from a distance, so we can offer a fresh vision and an original approach.

I know you are already working on a new project.

O. K.: Yes, this is a luxury cruise train, again for JR East, which is scheduled to enter service in spring 2016. Although there are ten cars, it can only take 35 passengers so it offers a very exclusive experience. This is a three-day trip, and it’s comparable to a ship cruise. Accordingly, it’s very expensive as it will probably cost around $6-7,000 per person. Our goal is to go one step beyond the famous Seven Stars in Kyushu and offer a oneof-a-kind experience. Each room, for example, is more like an en-suite, with its own private bathroom, just like a hotel. This said, we can’t really compete with staying at a high-end ryokan (traditional inn) in Kyoto, so we have to find something new. In order to do this we have to think out of the box. So I’ve had the idea of building cars that are taller than usual. At its highest, the ceiling is about four metres high.

O. K.: I love to see children’s reactions. When a new train begins operating, I go to the station and see all those kids with their mums taking photos, and I can see their ecstatic faces. This is a kind of satisfaction I’ve never experienced before, even when I used to work at Ferrari.