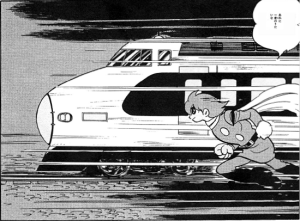 The shinkansen celebrates its fiftieth birthday this year. It is a technological success that has found its place in society.

October 1964 will remain a historical benchmark for many Japanese citizens. In addition to the Tokyo Olympic Games that allowed the country to regain acceptance worldwide just two decades after World War II, the tenth month of this important year marks the entry into service of a high speed train between the capital and Osaka. Named the Tokaido Shinkansen, it was launched on the 1st of October. “It was a crucial moment, as though the train was embodying the transition between Japan of the Past into Japan of the Future,” recalled the actor Harada Yoshio, a famous train lover, a few weeks before he died in 2011. With speeds of 210km/h, the new blue and white train resembled a bullet, hence it’s English nickname “bullet train”, and was able to cut down the travel time between Tokyo and Shin-Osaka considerably. This station was built specifically to host the “super express dream” (yume no chotokkyu), as the media had dubbed it. All sorts of measures were taken so that people would become accustomed to the new train, despite its prohibitive construction costs (380 billion yen instead of the 200 initially planned). The National Society of Japanese Railways (JNR), a public company at the time, published booklets for children, not only to explain how the train worked but, above all, to help make them proud of their country’s progress.
As a symbol of technological mastery, the shinkasen quickly became a part of everyday Japanese life. Between October and December 1964, 11 million people took the train, easing the gridlock of rail traffic along the Pacific coast. Today, 150 million people use the Tokaido Shinkansen, with its success inspiring many writers. The first of these writers was Ishinomori Shotaro, a mangaka who started a series called Cyborg 009. Published in the weekly Shonen King, a manga magazine for teenagers, the story follows several individuals abducted by a mafia organisation bent on world domination called Black Ghost and how they fight back after being transformed into cyborgs. As soon as it was released, it became a best seller and was an opportunity for the author to feature the shinkansen. Just two months after it came into service, the train made an appearance in the December 1964 issue of Shonen King. Thanks to Ishimori’s skill, the speed at which the train travels is perfectly portrayed. The hero of the story running alongside the train cannot hide his admiration. “I really want to enjoy this marvel, even without a ticket!” he says before leaping onto the roof and settling down with a “Wow, it’s amazing!”. In six short pages, the mangaka succeeds in sharing the latest technological breakthrough with his young audience, his superhero endorsing its existence and qualities. No need for him to run when the train can travel fast and carry him in complete safety. This last point was particularly important for the project’s developers, and safety (anzen) was paramount in their marketing campaigns. The aim is to demonstrate that passengers have nothing to fear while travelling at 210km/h. Everything
was designed with safety in mind, even in the event of an earthquake. In the booklets handed out at the launch of the train, this point was clearly highlighted. The authorities and JNR are not alone in maintaining what is called the security myth (anzen shinwa), the film industry has also made it their bread and butter. During the 70s, a great many disaster movies were made. Eighteen months after the success of Toho studio’s production: The Sinking of Japan (Nihon chinbostu), Moritani Shiro’s film adaption of Komatsu Sakyo’s famous novel, its rival production company, Toei, brought out The Bullet Train (Shinkansen Daibakuha), directed by Sato Junya. A criminal, played by Takakura Ken, hides a bomb on the shinkansen that will explode if the train travels under 80 km/h. The audience’s nerves are set on edge by a series of scenes depicting what could happen in the event of an explosion. However, with the help of cool headed JNR employees and the good judgement of the police, the worst is avoided, reinforcing the train’s reputation as being disaster-proof. Since its launch fifty years ago, the Shinkansen has never had any major accidents, even during earthquakes – including the one on the 11th of March 2011. When the ground started shaking, ten trains were travelling at full speed between Fukushima and Shin-Aomori, but none of them were derailed. And that day, it was not just happening in the cinema.