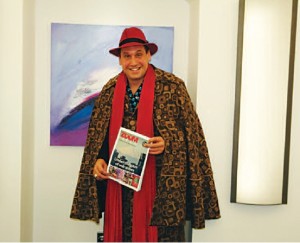 Rakugo is a very unique way of making laugh people in Japan. We met Katsura Sunshine, one of his best representative.

I hear that you were already a successful playwright and composer in Canada when you started doing rakugo, but what was your first point of contact with Japanese culture?

Katsura Sunshine : It was actually through being a playwright and composer that I first came into contact with Japan. I had just translated a comic play from ancient Greece and adapted it into a musical, and while I was doing research for that I came across many treatises by different academics who all pointed to the similarities between Greek comedy and Japanese noh and kabuki theatre. The instruments used are similar, with a big drum similar to the Japanese taiko, a three stringed instrument like the shamisen and a flute, and they both make use of masks as well as many other concurrent aspects. The difference, though, is that ancient Greek drama had disappeared as a living art form, while nohand kabuki have continued in the same tradition from ancient times to the present (e.g. they have never died out and continue to be performed in the same way today). So I realised that you can still see these Japanese theatrical traditions in their original form and thought that I might take a trip to Japan to have a look. It was a very casual interest at first but ultimately wound up like this! I don’t think you can let your guard down when doing things off the cuff like that. You never know how they might turn out!

Please could you tell us about how you started out in rakugo and what its appeal was for you?

K. S. : My first experience of rakugo was after living in Japan for about 5 years. I could understand a fair bit of Japanese by then and was living in Yokohama, where I would always be at this small yakitori place near my house. I went about 8 times a week! I really loved yakitori! Now, the proprietor of that little eatery would hold a small rakugo event for up and coming young performers in the matted section of the shop once every other month and he invited me along to watch. I went along because he said I might find it amusing. When I arrived there were the cushions and the rug with lanterns adorning the walls and the performers appeared wearing kimono and sitting formally in seiza to a backing of shamisen music. And they would create a whole world for the audience using nothing but a folding fan and a towel. I thought that this was a wonderful art form and really fell in love with it at first sight. Even the introduction was amazing. The host bowed to the audience and formally welcomed everyone, thanking them for coming along and expressing the performer’s gratitude. That was the moment I first encountered rakugo.

There are some differences between the European and Japanese senses of humour and what makes people from different cultures laugh. Did you do any special preparation for your upcoming performances over here or research the national character for example?

K. S. : I don’t really do any special preparations. Previously I have been around Canada, America, SriLanka, Singapore and the U.K. and as you would expect, the things that make people laugh really do differ from country to country. The styles of comedy are very different. They are even pretty different between Canada and the U.S. and Canada and the U.K. are completely different. However, rakugo is not Canadian or American comedy, it is Japanese comedy from 400 years ago. I think that it is actually universal. It works everywhere, and if you perform rakugo as it is then anyone will laugh at it whether you go to Canada, The U.K. or the U.S. When I first brought rakugo to Canada I thought about how I should adapt it for the local audience. My teacher also thought hard about this and I think that any rakugo performer who has gone overseas will have thought about it at some point. “How can I make rakugo easier to understand?” for example. So I thought about it and tried to change it a bit but the reaction I got was not riotous laughter. They did laugh but I felt that something was not quite right. I felt that this material just had to be funny. I was an experienced playwright and could not get why they did not laugh. So I thought about it even more and reasoned that they might not be laughing so much because I had deliberately tried to make it easy to get when I translated the material into English. So I went away and revised the translation and tried to do as direct a translation as possible, keeping it as close to the original rakugo as I could. I used the original rakugo rhythm and the rakugo intonation and even though I was doing it in English it was as if it was still completely in Japanese. I performed it in English with the same feeling as if I were speaking in the Kansai accent and dialect and the audience roared with laughter. Just as expected, rakugo does not need to be adapted. If you perform it just as it is then it has a phenomenal power to it from 400 years ago. I realised that my teacher had 40 odd years of experience in rakugo and that gave his art an amazing resilience, so there really is no need to change it at all. And once I realised that my life became quite a bit easier.

Speaking of translating the language of the performances, how did you turn say, “nagaya” (a traditional kind of terraced tenement housing common in poorer districts of old Japanese towns) into English for example?

K. S. : I have not performed the famous “nagaya” set in English yet, but there is a certain piece in my teacher’s repertoire called “Homework” that has been passed down to me, which posed similar problems. It revolves around a child in year 8 at school who cannot understand a traditional oriental maths roblem about how to calculate an unknown quantity of tortoises and cranes from the total number of legs and so asks his dad how to do it. The dad has even less of an idea how to do it, so he goes to work and asks one of the bright young employees there, who explains it to him. This then goes on over and over again. So the dad first asks the kid to read him the problem and the kid says “Ok dad, I’ll read it out so listen good ok”, to which the dad responds “You precocious little git. A year 8 maths question will be no problem, just get on and read it!”. “Ok then” says the boy, “On a moonlit night there are many tortoises and cranes gathering around the lake. If you count the heads there are 16 animals in total and if you count the legs there are 44. How many tortoises and how many cranes are there?” to which the dad is stumped and asks “Ok, go on, the question can’t just finish there, there must be more! Like how many footprints there are or reports from people living nearby or something?”. The boy tells him that is it and the father is stumped, saying that it is a stupid problem anyway. And so it goes on from there. So for an example of a problem with doing this routine in English, the crane does not click with an English speaking audience immediately as a familiar bird, so I talked to my teacher about how to change it and he proposed trying the flamingo, so at first we turned them into flamingos, thinking that they might be funnier. And it did turn out to be really funny. The sound of the word flamingo is just funny, and so is the image of tortoises and flamingos together. However, when I performed that in Canada using flamingos they did laugh but the story lost some of its Japaneseness. That was because to Canadians, the flamingo conjures an image of the state of Florida in the U.S. However, using the original cranes would give it a bit too serious a[WU6] feeling. This problem with the birds used means that this piece might not get much of a laugh initially, but by keeping the overall Japanese character to the story, the payoff at the end is greater and gets a bigger laugh. This was something that I understood as a playwright; that the material will succeed if the overall story is interesting, rather than relying on getting individual laughs all the way through. You do not need to go for the kind of laughs that are at the expense of the story. So going back to the original question, I would have “nagaya” as “tenement”, even though it may not immediately click with the English audience.

Please could you give us a message for all the readers of Zoom Japan?

K. S. : Ladies and Gentlemen, when Katsura Sunshine comes to town this year you are guaranteed a great laugh so please come along to see my show.