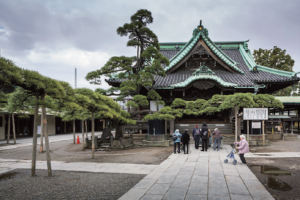 Yamada Yoji built a great part of his legendary film career in the Shibamata district of Tokyo.

Since ancient times, and especially with the establishment of the Edo shogunate (1603-1867), Tokyo has been divided into two roughly defined areas: on the west side of Edo Castle (the site of today’s Imperial Palace), the shogun’s vassals had their big estates in the hilly Yamanote area, while the merchant families lived on the east side – the so-called Shitamachi or downtown area. Even after the end of the Tokugawa regime and Japan’s modernization, Tokyo’s lower-middle classes have continued to crowd the eastern neighbourhoods on both sides of the Sumida River, giving that area its particular rough-and-tumble, blue-collar character.

When it comes to Shitamachi, few cultural icons are more popular among the Japanese than Torasan. In the 48 instalments of his cinematic saga “Otoko wa tsurai yo” (It’s Tough Being a Man, (1969-1995), Yamada Yoji brought to life the prototypical Edokko (native of Edo) – always cheerful and so un-Japanese in his assertiveness.
And, of course Tora-san is synonymous with Shibamata, a working-class neighbourhood in the easternmost Katsushika Ward, just next to Chiba Prefecture, where his family lives and he periodically returns at the end of his picaresque adventures. His statue welcomes us as soon as we step out of the station. Obviously, Shibamata has made the most of its connection with Yamada’s movies, and today its commercial area is mainly geared to tourists – just look at all the old timers who line up to take a group photo in front of the statue. This said, the place has a lot to offer to those who want to experience that old-Tokyo feeling which has disappeared from most of the city.

After greeting Tora-san, we go left, past a traditional wooden arch emblazoned with a cube-like symbol. On the way we pass several shops including one selling sweet potato ice cream. After a 3-minute walk we reach a small crossing. Just in front of us, a bright-red robot (whose body is actually a soft drink vending machine) beckons us into a funky little building. On the first floor, Haikara Yokocho sells dagashi (traditional sweets and junk food) and other miscellaneous goods. The real treasure though, is a bunch of old arcade games that visitors can actually play with. The second floor houses the cute Omocha Hakubutsukan (Toy Museum). As a matter of fact, Katsushika Ward is home to many toy manufacturers.

During the Showa Era (1926-1989), every Japanese neighbourhood had its own dagashiya, similar to today’s convenience store. These small cramped shops not only sold sweets and junk food but even daomocha (dagashi toys), and regularly attracted hordes of kids who would spend all their pocket money on those little cheap plastic treasures.
Another arch just to the right of the museum is the entrance to a street leading to Taishakuten, the most important temple in the area. The 200-metre-long path retains the nostalgic charm of years gone by. This is the ideal place to taste some traditional Japanese snacks like dango (dumplings) and senbei (rice crackers) or maybe something more substantial like tempura, unagi (eel) or soba noodles. The more adventurous may even want to try some tsukemono (Japanese style pickles) or tsukudani (preserved food simmered in soy), a local favourite being inago (grasshopper!), which surprisingly tastes like shrimps. On this same stretch of the approach to the temple, do not forget to have a look at Toraya – the sweets shop used during the filming of the first three Tora-san movies – and Takagiya, another store which features prominently in the series.

After eating our fill, there is nothing better than a little rest and meditation, so we pass under Taishakuten’s Niten Gate and soak up the atmosphere. This temple was founded in 1629, and in 2009 was selected as one of the 100 Landscapes of Japan. It features, among other things, a sculpture gallery, a wonderful garden and a Zuiryuno-matsu pine tree whose extraordinarily long branches unfold before the inner temple of Taishakudo. The gate itself, though massive in size, is beautifully carved and guarded by towering wooden statues. Taishakuten is another familiar setting of the Tora-san movies. In the very first instalment of the series, for instance, Torajiro pays a visit to the temple and has a brief chat with the head monk (Ryu Chishu, Ozu Yasujiro’s favourite actor) before heading home.
After retracing our steps out of the temple, we turn right and then right again on the main road which leads to Edo-gawa. From the top of the high embankment, which features prominently in the films’ opening titles, we can admire the majesty of one of Tokyo’s main rivers. Local people come here to jog or ride their bicycles, walk their dogs or maybe watch a game of baseball.
On the near bank we notice a small wooden jetty overshadowed by a few trees. It is called Yagirino-watashi. This and other landings were built by the shogunate in the early Edo period to help local farmers cross the river. This one in Shibamata is the only landing remaining in Tokyo and is famous for being portrayed in novels and songs. You can actually board the ferryboat, cross to the other side, and return.

After another 10-minute walk along the road which carries traffic alongside the river, we arrive at Yamamoto-tei. This was the residence of Yamamoto Einosuke, a manufacturer of camera components. This place is often used as a location for films, TV dramas and commercials. Even without visiting its hybrid Japanese-Western building, we can still enjoy a stroll through the traditional Japanese-style garden. A flight of stairs right in front of Yamamoto-tei takes us to a park from whose summit we can enjoy panoramic views of Taishakuten, Yamamoto-tei, and the Edo River. This is also a handy shortcut to our next destination, the Tora-san Museum, which is accessible by a lift. Divided into 15 sections, this museum replicates the world of the “Otoko wa tsurai yo” series. Besides costumes, screenplays and videos, it features the actual Kurumaya sweetshop set used in Shochiku’s Ofuna Studio. Among the surprises there is a series of scenes depicting Torajiro’s childhood years in the kami-shibai (picture story show) style – a period not covered by the films, which focus instead on his adult life. This part was expressly created by Yamada for the museum in order to provide a background story for Tora-san’s character. If you are still hungry for Yamada’s movies, you only have to cross the street and visit the Yamada Yoji Museum that presents a collection of works by the director. Through character descriptions and comments on the social background of each film, the museum offers insights into the director’s passion for filmmaking.