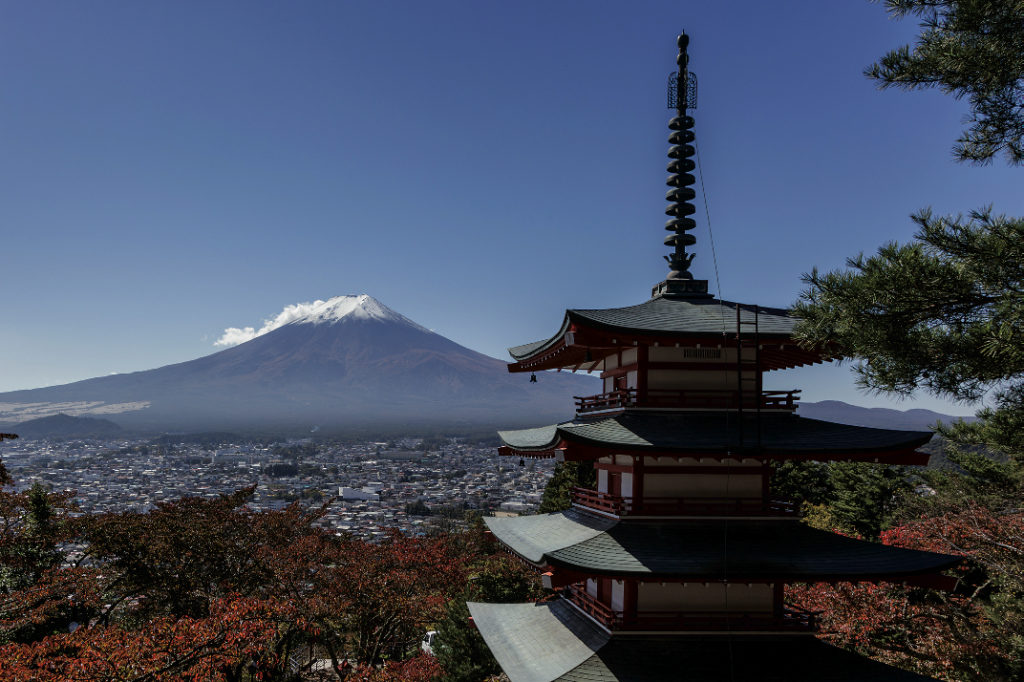 Mount Fuji as seen from Chureito Pagoda in Fujiyoshida.

There are many treasures in the lakeland region surrounding the famous volcano, including the Itchiko Kubota Art Museum.

At the foot of Mount Fuji is a region full of lakes, waterfalls and caves with stunning natural landscapes. Two hours out of Tokyo, the region of Fujigoko or “the five lakes” offers interesting prospects for a day’s hike far from the bustling metropolis. Lake Kawaguchiki, famous for reflecting the image of the most celebrated volcano in the country, is the easiest of the five lakes to reach from the capital. Along its northern shore, nestled in the heart of the wooded hills, is a fascinating museum dedicated to Kubota Itchiku, a dyer and artist. This exceptional man committed his life to recreating tsujigahana, the lost art of dyeing kimonos, popular in 15th century Japan.

As soon as you step into to his world you’re enraptured. The gardens, the buildings, the collection of kimonos, the artist’s work — they all contribute to the magic of this place. It is a journey that takes you out of this world and time. Born in 1919 in Tokyo, Kubota was apprenticed at 14 years of age to Kobayashi Kioshi, a master of the technique of yuzen dyeing. At 20, when he visited the National Museum of Tokyo, he had his first encounter with a dyed tsuijigahana garment dating from the Muromachi period (15th century). He lingered in front of this work of art, fascinated by its beauty, and swore then that he would succeed in rediscovering this technique, which had been lost for over 300 years. This effect is a far more elaborate type of “tiedyeing” (tying fabric before dyeing) than you would see on any hippy’s T-shirt.

During the Second World War Kubota was sent to Siberia as a prisoner. This period of his life, though traumatic, in no way diminished his determination to reproduce the tsuijigahana technique. On the contrary, each day that he watched his fellow countrymen die of hunger and cold he swore that he would survive and succeed in reproducing the magnificent Siberian sunsets using the technique on kimonos made of silk. On his return from captivity the artist threw himself obsessively into years of research in order to reproduce the famous method of dyeing. After twenty years of perseverance he succeeded. In 1977, when he was already sixty years old, his kimonos were exhibited in the capital for the first time, then very soon throughout the whole world. 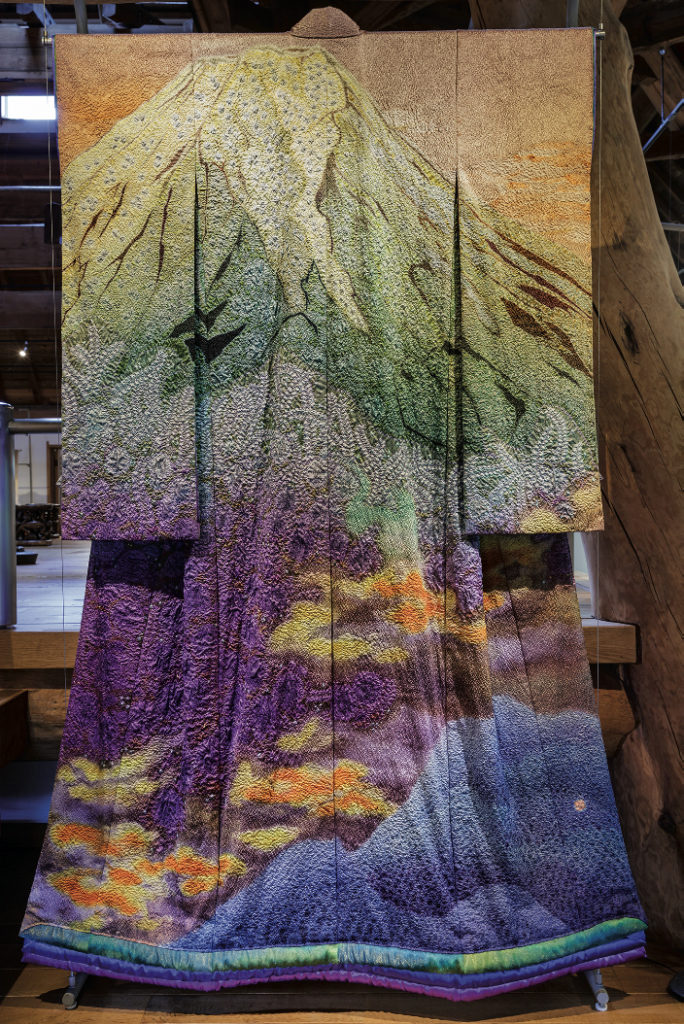 Kubota’s work: a feast for the eyes.

Kubota gained international recognition and was awarded the French Order of Arts and Letters in 1990 by Jack Lang, the French Minister of Culture. His stage kimonos were displayed in Paris at the Guimet Museum in 2015, in an exhibition of Asian Theatre. In 1994 the artist made one of his dreams come true and opened his own museum in a location he judged to be ideal, on the shores of Lake Kawaguchiko, surrounded by red pines and, in particular, with views towards Mount Fuji, whose image the master loves to represent on his kimonos. This sacred mountain holds a special place in his heart, as is the case for many Japanese people. Mount Fuji is a symbol of Japanese culture and an object of veneration throughout the archipelago. Rising to a height of 3,776 metres, the volcano is the highest point in Japan. Alongside Mount Tate and Mount Haku, also located on Honshu, Japan’s principal island, Fuji-san is one of the country’s three sacred mountains.

But let us get back to the museum. The structure of the principal building where the kimonos are on display combines traditional Japanese construction techniques with those from the west. Turning your gaze upwards you can admire the pyramid shape of the roof frame supported by sixteen wooden beams that are more than a thousand years old. Following the artist’s wishes, there is no glazing or barrier between you and the works of art. You will be able to appreciate both the colours and the minute details of the patterns close up. Natural light filters through the glass summit of the pyramid onto the most precious kimonos, displayed on a raised stage in the centre of the building. Among them is “San” or “Burning Sun”, the first ever kimono made by the artist in tribute to the Siberian sunsets. Brought together for a collection called “Symphony of Light”, the kimonos on display change every three to four months depending on the seasons. This collection illustrates the grandeur of the universe through the depiction of the four seasons and Mount Fuji. Displayed end to end, these kimonos create real landscapes, “like a series of prints”, the museum director explains. 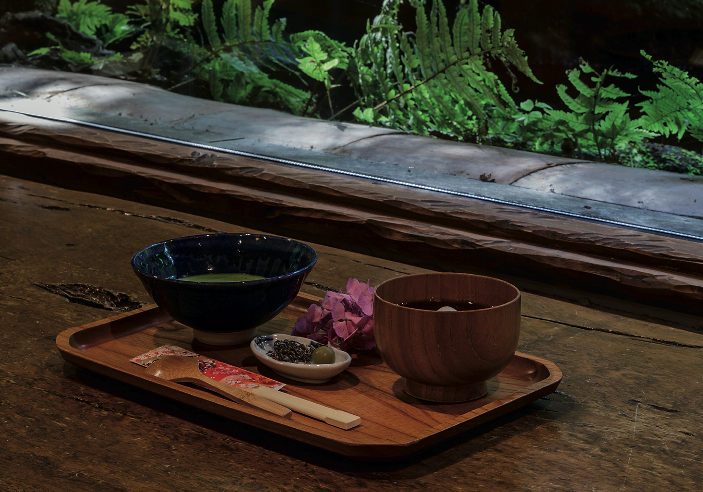 A must-do: a visit to the tea house that opens out onto the beautiful garden conceived by the artist.

When you enter the building displaying the kimonos you’ll be welcomed by Miyahara Sakuo, honorary director of the museum and apprentice to the great master for 25 years until his death in 2003. He’ll guide you, with typical Japanese politeness, towards a small adjoining room to watch a 20 minute film explaining the tsujigahana technique and the incredible story of Kubota’s life. Also, be sure not to miss out on another typical local experience that awaits you in the museum’s tea room, with its large bay window that opens out onto the garden: a tea ceremony or “cha no yu”. Although this is a shortened form of the tea ceremony, a few minutes are enough to appreciate this century-old ritual that encourages calm and meditation, in complete harmony with the mood of Kubota’s museum. The cha no yu starts with the preparation of powdered green tea (matcha). The water is heated up to a precise temperature and poured over the powder, then a delicate soft green foam is created on the surface of the tea in your bowl using a bamboo whisk. With the first sip you have the surprising impression of having tasted freshly cut grass… it’s all there: the colour and the fragrance. Then you get used to the slight bitterness, allayed by the velvety texture of small traditional Japanese cakes, which always accompany this drink.

Continue your visit with a walk around the museum’s garden, which was also conceived by the artist. Art works from Asia and Africa are assembled here. Follow the stream under the pines to the waterfalls and you’ll reach a small cave made of lava stone from Mount Fuji. A small statue of a bodhisattva rests here, a bit kitsch, but not without charm. Depending on the time of year you’ll be able to admire the cherry trees in bloom, azaleas, or simply the beautiful leaves of the trees: soft green in spring or dazzling shades in autumn. The many different autumnal shades of reds, yellows and browns are unlike any found outside Japan. 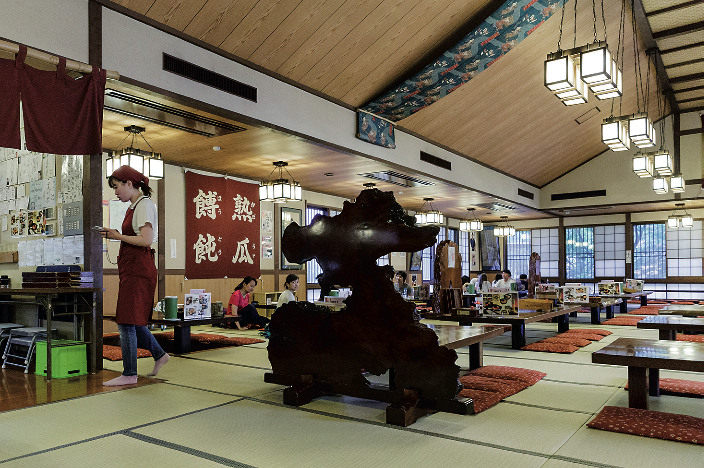 Do not leave the region before having tried a local speciality, particularly at the Kosaku Inn.

Spending the morning at the museum will have given you an appetite, so you can then go on to savour culinary specialities of the region: hoto, a dish made of udon noodles and different vegetables – kabocha (pumpkin), hakusai (Chinese cabbage), carrots, sansai (mountain vegetables) or sweet peas, depending on the season – all of them in a savoury miso based soup. One of the best places in Kawaguchiko to eat is the Kosaku Inn, fifteen minutes’ walk from the train station. After removing your shoes at the entrance you’ll be seated in a large room built of wood with an impressive timber and glass roof. Hoto is served in individual-sized casserole dishes and the menu also includes pork, beef, duck, oysters and, for the more adventurous, wild boar, bear or even turtle stew. The large portions are very reasonably priced. These dishes are great winter fare, but a better alternative in the summer months is to have lunch on the lake shore in one of the coffee shops with a terrace overlooking the lake and Mount Fuji.

Fujiyoshida is only 10 minutes away by train, and a short walk from the station is Arakurayama Sengen Park, one of the best places from which to enjoy a view of the iconic volcano. You will soon understand why a famous English guidebook chose an image of the Chureito Pagoda to illustrate the front cover of their previous publications. The pagoda has five vermillion lacquered floors, and was built in 1963 as a peace memorial. It is part of Arakura Sengen Shrine, 10 minutes away by train from Kawaguchiko. Leave the train at Shimo-Yoshida on the Fujikyo line, then walk for 10 minutes to reach the site. When the cherry trees are in bloom, and in autumn, the pagoda attracts crowds of photographers wanting to capture Mount Fuji at its best. In order to enjoy this view you’ll have to climb 400 steps, but it is well worth the effort!

If you are staying for several days in this part of Japan, take some time to explore all five lakes located on the northern side of Mount Fuji near Fujiyoshida. Many printed hiking guides with views of Mount Fuji are available at the Kawaguchiko Tourist Office. And after all that effort, why not treat yourself to some comfort? Do as the Japanese do and allow yourself to be tempted by the winning combination of hiking and onsen. Enjoy a moment of relaxation and calm at one of the many hot springs in the area before heading back towards the bustle of the capital city.

How To Get There
To get from Tokyo to Kawaguchiko station, the easiest way is to catch a bus from Shinjuku (Bus terminal), from Shibuya (Mark City) or from Tokyo station (Yaesu South Exit). The trip takes about two hours. Take care, as the Japan Rail pass is not valid on these buses. It will cost around 1,800 yen for a return ticket.
From Kawaguchiko station to Itchiku Kubota Art Museum, take the Retrobus from the station to the Kubota Itchiku Bijutsukan bus-stop. It takes about 25 minutes.

No14 [Travel] Her majesty Mount Fuji