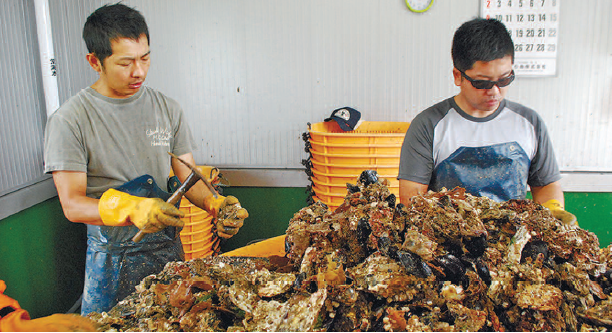 Japan’s oyster economy, severely impacted like many other sectors of industry, is now recovering with the help of French people.

The French city of Royan, located in the department of Charente-Maritime, has a population of 17,000 people. It’s an international tourist destination situated 100km north of Bordeaux, and famous for its wine. During the holiday season more than 100,000 people sail and cruise in the area. Oysters produced in the Marennes-Oléron Basin are popular around the world and widely exported. In fact, oyster farming here dates back to the Roman era. It began in the 19th century when the salt marshes were cleared and transformed into oyster beds. Originally, only flat oysters were farmed, but in 1922 a disease killed off most of the oyster harvest and Portuguese oysters had to be brought in for cultivation. However, in 1967 another disease hit the region and almost wiped out all the oysters once again. Consequently, French producers started to show an interest in the high-quality and disease-resistant Japanese oysters from Sanriku (on the eastern coast of the Tohoku region). Many oysters were brought over from Mangoku-ura near Ishinomaki and introduced into the sea around Royan. Since then, most of the oysters from Marennes-Oléron are of Japanese origin. More than half a century has passed since these events and succeeding generations of French oyster farmers continue to be grateful to their Japanese colleagues, which explains their speedy and efficient response to the earthquake on the 11th of March 2011.

Aged 65, Gérard Viaud is one of the principal oyster farmers in the Mareennes-Oléron basin. As the president of the National Committee for Shellfish Farming, he has been to Tohoku’s oyster regions around Ishinomaki and Kesennuma, as well as another major oyster region in Hiroshima prefecture and even to China. He recognizes the quality of oysters from along the Sanriku coastline where Ishinomaki is situated. “Though oysters from Hiroshima are better, it’s advisable to eat them cooked rather than raw. The environment in Miyagi prefecture is better suited to producing higher quality oysters that can be eaten raw,” he explains, before adding that, “You have to fight to ensure recognition for local produce. It’s what we do in France”.
In Charent-Maritime the number of oyster farmers has fallen from 5,000 to 1,000 in the past 50 years. Just as in Ishinomaki, there is a problem with people coming into the business. To raise their income, oyster farmers have increased the scale of their production, but regardless of how much they produce, the farmers have taken the initiative to make sure that their oysters are sold throughout France. Royan is not the only place where oysters are cultivated, so they often repeat the mantra “To survive, we need to protect local production”. When we asked Mr Viaud if he had any advice for his Japanese colleagues in Ishinomaki, he offered them this encouragement: “For an oyster farmer, what’s important is maintaining quality. We believe that the Atlantic Ocean is the best environment for us, just as the Pacific Ocean is perfect for oyster farmers from Miyagi. We believe that with the help of the sea, the love and the pride they take in their work will ensure the production of quality oysters. I recognize that the quality of oysters from Miyagi is world-class. They should be very proud of that”. If France represents oyster farming in Europe, then Japan is its standard bearer in Asia. The Pacific oysters from Ishinomaki are usually eaten raw and are much appreciated by gourmets. Ishimori Yuji is the president of the Ishinomaki Japan’s oyster economy, severely impacted like many other sectors of industry, is now recovering with the help of French people. Oyster Farmers Committee, and after the earthquake he worked hard to build up local production again, benefitting from many helpful initiatives, including ropes sent from France for cultivating the oysters. “This is how we were able to harvest oysters for the two years following the disaster.

Without their help, many farmers would have had to abandon oyster production. We will never be able to thank them enough. If something happened in France, I would rush to help the farmers – that’s a promise,” he assures us. Their relationship is a strong one.
Though the problem of passing on the tradition of oyster cultivation to the younger generation is more serious in Ishinomaki than in Royan, Mr Ishimori is quite optimistic. “Since the earthquake, I realize that young people here are very active. I am proud of the energy they have, and it gives me pleasure to think about the future of our region and to work with them,” he explains. Nevertheless, he recognizes that the present situation in the region and in the fishing industry in general is not encouraging, but keeps on fighting anyway. “Our generation has not had its final say in the matter. We need to help the younger generation with our experiences and our connections in order to develop local production,” he explains. Mr Ishimori responds to Mr Viaud’s support with humour: “I am delighted to hear there are different oyster farmers facing the same issues. If fishermen were not proud of the sea they would not make any progress. As a representative of Japanese fishermen, I say we cannot give up. That is our way of thanking them”. The earthquake caused considerable damage to the oyster farmers, who lost a lot of their equipment, meaning many had to give up their trade. The number of active farmers has decreased and the level of production has fallen by half since the period before the earthquake. However, some of them are trying to increase their production rate by introducing new techniques from abroad, as is the case for the the Wagaki company based in Higashi-Matsushima. Its director, Abe Toshimi, is proud of their efforts. “While we respect the heritage and traditional techniques suited to our region, we also use techniques that come from other counties. Our objective is to be the top ranking company in the world,” he says. According to the Prefectoral Committee for Fishing, production of oysters in the region had fallen from 3,119 tonnes in 2010 to just 318 tonnes in 2011. It then increased slightly to 597 tonnes in 2012, followed by 1,154 in 2013, and 1,564 in 2014. There are only 430 oyster farmers now, half as many as in 2010, so to produce the same amount as before the earthquake, it would mean increasing production by 50%. An expert from the Committee affirms that, “It is impossible to reach the same level of production as before, so we need to rely on an increase in added value”. In 2002, Abe Toshimi was working in a chemist shop in Shiogama when, aged only 25, he took over the running of the family oyster business. “The first year was excellent. I was surprised to earn so much. However, as time went by, it has become more and more difficult to earn money,” he says. In 2010, Abe’s father passed the farm on to him, and although the annual turnover amounts to tens of millions of yen, he laments that “the annual income for the whole family is barely 3 million yen, in return for working from early morning to last thing at night”. At the time of the earthquake his future was already uncertain, but the tsunami swept away his father and all his employees; he lost four of his five boats and all of his facilities as well as his house. Abe wanted to leave everything to do with oyster farming behind, but following the disaster, offers of employment were rare. When clearing away the beach with his colleagues, fellow fishermen from the neighbourhood, he wondered if it was the right thing to end it all in that way. Gradually, the desire and the will to take up oyster farming again returned. After taking the decision, he needed a budget of nearly 50 million yen to buy boats and other equipment, but it was not enough just to rebuild everything as it was before; that would only repeat the problems of the past. It was at that moment that he discovered that one of his friends was going to France to visit oyster farms, and he told himself that this could be the opportunity for change, deciding to go with him.

They spent two weeks in France and visited different farms on the Atlantic and Mediterranean coasts. The farm that impressed Abe and his friend most was in Royan, in the Marennes-Oléron region, and one of the biggest in the world. Oyster farmers in Marennes-Oléron have an original procedure for the penultimate step in oyster cultivation: they mature the oysters using a delicate balance of clear and salt water in shallow pools of sea water called “beds” that used to be salt marshes. The “beds” are lined with growing moss that lends its green colour and unique flavour to the oysters. What impressed Abe Toshimi was not only the quality of the oysters, but also the completely different approach to the task. The area of cultivation is considerable, and they undertake a lot of direct selling. “In France, the oysters are harvested not by boats, but with tractors, just like on any large farm estate. The oyster farmer feels more like an agricultural farmer than a fisherman,” he confesses, adding that. “For the younger workers, the work is easier and tasks better organized. In Japan, our respect for traditional techniques limits us”. This experience really seems to have opened his eyes. Back in Japan, Abe started up the Wagaki company with his friends. In addition to using scallop shells to retrieve the oysters (spats), the Wagaki company now also uses plastic bowl-shaped trays, a French technique. It is one of the best ways to grow what are known as “single seed oysters”, which are the perfect shape to be sold with their shells. These oysters are also enjoyed by those who prefer them young.

As for the future, “The objective is to do everything ourselves, from production and preparation, right through to the consumer. The future of our business depends on it,” Abe explains. “The earthquake was a tragic event, but we haven’t thrown in the towel. We will make sure that Ishinomaki’s oyster cultivation is the best in the world”.

No34 [Series] The unsinkable boats