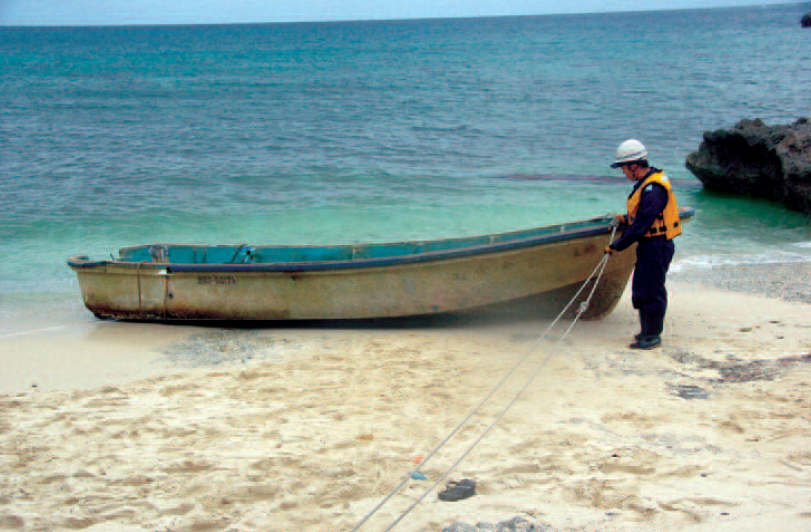 We thought they had disappeared forever, but some boats have reappeared thousands of miles away from their port of origin.

More than four years after the earthquake on the 11th of March 2011, wrecked fishing boats carried away by the tsunami continue to wash up on the coasts of Okinawa and Hawaii. For those who lost everything during the earthquake, these boats are still of great sentimental value. On April the 13th, a little boat named Tokumaru No.5, which had been moored at Kumazawa and had been carried away by the tsunami, was found on the beach of Ikema Island in Okinawa. Its owner is a sailor, Fujii Tokushiro, but the boat was mainly used by his father Tokuo, who died aged 88 a few months after the earthquake. “I’m surprised that this boat drifted for over four years to finally reach Okinawa. Maybe our father guided it south to please the family,” he says.

Kumazawa is located on the tip of Ogatsu Peninsula, notorious for its violent waves. The area isn’t ideal for fish farming, so the fishermen made a living from fishing for abalone and sea-urchins or collecting seaweed. In the Fujii household, Tokushiro would be away for several months at a time working on large fishing boats, and during that time his father Tokuo, his mother Tomeka and his wife Mitsue had to be content to fish close to home with the little boat that was part of their daily lives. That is how the family lived for decades. On the 11th of March 2011, when the earthquake took place, Tokushiro was working on board a trawler off the south of Japan. His father Tokuo, Tomeka and Mitsue were at home. This earthquake was different from the usual, lasted longer and was more violent. Sensing that a tsunami might follow, Mitsue left their house located on a hill to tie up the boat securely. As soon as she finished, she turned towards the sea and saw the tide recede several hundred We thought they had disappeared forever, but some boats have reappeared thousands of miles away from their port of origin. The tsunami seemed inevitable, so she took refuge in their house. As white foamed waves crashed into the neighbourhood, the water level rose rapidly, the houses on the coast were submerged and the boat carried away. Luckily, their house survived, but the boat disappeared. Tokuo was stunned on hearing the news. His health declined and three months later, he died. However, the Fujii family rose above their sorrow and was able to get a new boat, thanks to help from others. The rhythm of their lives resumed, but this March, the maritime union informed the family that their boat had been found on Ikema Island, over 2,100 kilometres away from its home port.

It had lost its engine but the owner was identified thanks to its registration number. Lots of debris from the earthquake was also found on the west coast of the United States, and it’s possible that the Fujii’s boat arrived in Okinawa after having travelled all around the Pacific Ocean. “It must have experienced many storms over the past four years while drifting on the high seas; it’s probably what our father would have wanted,” says Tokushiro to explain this miraculous event. It was impossible to bring the boat back, so he asked that it be destroyed or preserved as a monument where it was. At the moment, the Ikema Fishermen’s Union is keeping it in the grounds of the Yabiji Centre, right next to Ikema harbour. In the near future, a notice will be displayed with the words: “In memory of the March 11th earthquake”. The boat will then be exhibited as a memorial. Another boat from Ogatsu, this time belonging to the late Ito Kyoichi from the Namiita district, was found at the end of April this year on a Hawaiian beach on O’hau Island. The boat was called Katsumaru no. 2 and was used as a fishing boat by Mr Ito, who had retired after working for many years on a whaler. He became ill and died in 2003, and his boat was abandoned. When the earthquake took place, nobody knew whose boat it was. Mr Ito’s wife, Takeno (68 years old at the time of the earthquake), was was carried away by the tsunami and is still declared missing. “Our father, who is now in heaven, came back with this boat to search for our mother. We would be happy for the boat to be brought back to Namiita and put on display in the centre of the village,” says their second daughter Sanae, after hearing the news about the discovery of Katsumaru No. 2 on O’hau Island. The other residents in the neighbourhood agree. “It’s a miracle finding the boat four years later. We should exhibit it at the Centre to remember the earthquake,” one of them says.