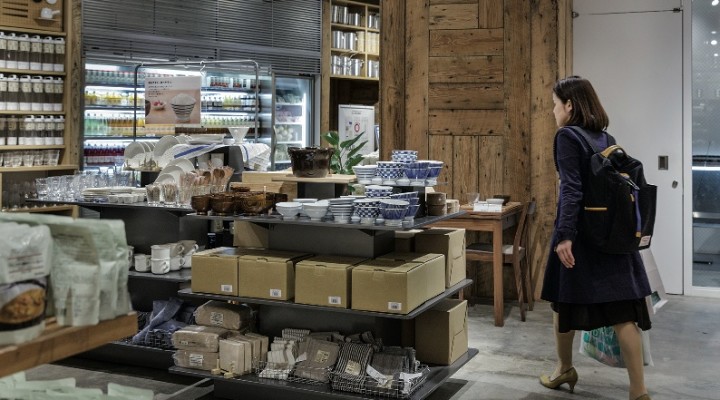 The incredible success of Muji, both in Japan and abroad, expresses a desire to return to basics.

Since the end of the Second World War, Japan has often been synonymous with affordable, no-frills, quality products. While Japanese manufacturers used transistor radios to make inroads into Western markets 60 years ago, today foreign customers are more likely to buy clothes (e.g. Uniqlo) or the wide range of everyday goods offered by Mujirushi Ryohin. Literally translated as “Quality products without logos”, but better known worldwide as Muji, this chain started in 1980 as a line of 40 household and food products (e.g. liquid detergent and canned snow crab flakes) that were sold in the supermarkets of its parent company, Seiyu. Fast forward 34 years, and by 2014 the company had 385 stores in Japan and 255 abroad, hoping to increase its global presence in 50 countries by the time Tokyo hosts the 2020 Summer Olympics. Even today, when Muji has become a retail juggernaut with a 7,500-product catalogue (60% are household products, 35% are clothes and linen, with food making up the rest), the company remains faithful to its original philosophy: to make simply designed, highly functional goods whose production process emphasizes recycling, the avoidance of unnecessary waste and a no-logo policy. For many years, Muji did not even disclose the names of its designers, but has recently relaxed this policy with a series of collaborations with such well-known creators as James Irvine, Jasper Morrison and Fukasawa Naoto. Fukasawa in particular has been a member of Muji’s advisory board (a group of leading Japanese designers who approve all new products) since 2002, developing a number of successful products including the iconic wall-mounted CD player. Zoom Japan managed to reach Fukasawa for a short interview about Muji and product design.

You have collaborated with Muji for the last 14 years, and know their working methods intimately. In your opinion, what is the secret of their success?
Fukasawa Naoto: There is a constant debate going on at all levels about what Muji really is. Chairman Matsui Tadamitsu even came up with a 2,000-page manual – the Mujigram – in order to standardize every aspect of planning, development, production, distribution and sales. But far from being a top-down system, every employee can raise any problems they encounter and come up with solutions. Once their ideas are green-lighted, they are applied across all stores. Secondly, and maybe even more importantly, the manufacturing process is determined by the way consumers use the product. Muji is not interested in making its products artificially appealing through the use of strong colours or special features. They are against using excess packaging, as well as using celebrities to advertise their products. In other words they keep everything very simple, and whatever is not directly related to function is discarded.

Do you think Muji’s original success had something to do with the particular time when the company was founded?
F. N.: I think so. At the time Japanese society had reached the zenith of its economic growth. More and more people were enjoying considerable material wealth, and were putting a lot of time and energy into their daily lives. The 1980s was a period of excess, with people buying foreign- made luxury brands. On the other hand, those who couldn’t afford these products had to settle for poor-quality, low-priced goods. I think all the senseless spending created a need to return to basics for many people — that is, how to live and enjoy a simpler life. Muji’s idea of a so-called “compact life” was able to accurately grasp the direction in which society was heading. In fact, I think the 1980s – the Bubble years – were an aberration, because Japanese culture is really based on simplicity. Consider zen practice or the tea ceremony, which have removed all unnecessary elements in order to make things simple and reinforce quality and function. The traditional aesthetic of su (plain or unadorned) comes from the idea that simplicity is not merely being modest or frugal, but could possibly be more appealing than luxury.

Let me play devil’s advocate for a second. When one walks into a Muji shop everything is very uniform, with all those whites and khakis, and looks almost anonymous. don’t you think this is a negation of individualism?
F. N.: On the contrary, it’s for the purpose of nurturing people’s individuality that Muji creates products without personality. These products are designed in order to give consumers a blank space, and to stimulate their imagination. The last thing we want to do is to interfere with the consumer’s individuality. There are always things around us in life. The things you choose to live with represent the life and values of a person. Design means observing objectively and being aware of our surroundings; it’s a simple element in a larger environment. I like Muji’s approach because it doesn’t sell my name. The products I design are just objects that happen to be there – not anonymous but natural.

It’s true, though, that a lot of design is becoming very superficial, all surface and no content, no real social significance. Would you agree?
F. N.: It’s true that some people treat design as if it were a fashion trend. The truth is, however, that there is no such thing as a design that is good forever. People want something they will never get tired of, but at the same time they always want something new. Obviously this is a contradiction, but our lives are made up of many contradictions, and you need both things in your life. So I think there is enough space for both: serious design and frivolous design.

You are famous for combining minimal design with maximum functionality. What is design for you?
F.N.: The environment surrounding our daily lives has gradually shifted because of changes in our living spaces, consumer electronics and developments in IT. Generally speaking, many of the tools we casually use daily have a tendency to either get closer to the wall or to our body. Take the TV, for example. The old cathoderay tube models were very thick and bulky, but over the years, and especially with the advent of liquid crystals, they have become very thin. As a result, we can now hang a TV on the wall like a painting. You could say that TV today is just content. On the other hand, we can watch the same pictures through a palm-sized smart phone or a computer tablet, i.e. devices we can hold in our hands. In other words, all these tools are gradually changing shape, and only their original function remains. The closer an object gets to the human body, the easier it will be to adapt to if it has a softer, gentler form. As a designer, my job is not to give form to objects, but instead to determine their position. Is it going to be installed near a wall or used while in a human hand? That’s what’s important.

2 Comments on No40 [Trend] A simple return to basics