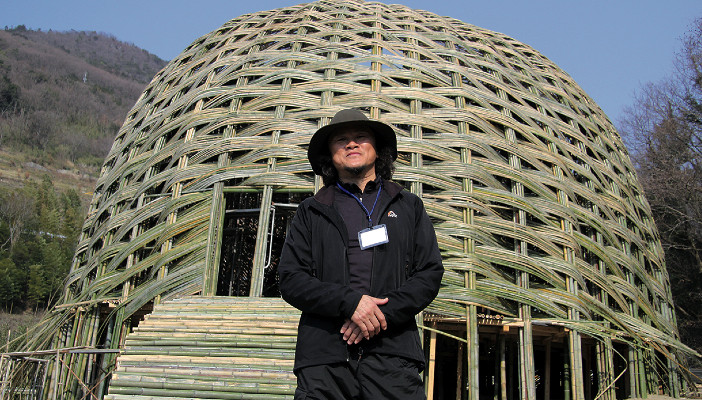 Over a million visitors are expected to come to the Inland Sea islands this year to celebrate contemporary art.

A giant bamboo dome is one of the major installations of the Setouchi Triennial art festival this year. It required around 5,000 bamboo trees to be woven together by hand, in record time. The installation’s designer, the Taiwanese artist Wang Wen-chih, travelled to Shodoshima Island in early March to oversee the finishing of the construction in person. Just two weeks before the opening of the festival, he was very nervous. “There’s a lot of work still to be done, and so little time left. We need to hurry up,” he says while walking across Nakayama, where the installation is situated, all the while continuing to give instructions to the team surrounding him. This is Wang Wen-Chih’s third Setouchi Triennial. His bamboo structure is called “Olive Dream”, a reference to the island itself, which has welcomed him warmly ever since 2010, and which relies on the cultivation of this oil producing fruit for 60% of its economy. “I have a special feeling for this place. The first time I visited, I didn’t know Japan. But people were so friendly and generous. They told me about their history, their culture, their landscapes. They have a very strong sense of community, which I admire a lot. I was very touched,” he says.

The Olive Dream instillation is Wang’s way of paying tribute to the islanders hospitality. “This time I imagined a round dome, like an olive. When visitors come in, I’d like them to feel happy, relaxed, free from the stress of everyday life. The centre of the installation is the heart of the olive. I hope the visitors will hear their own hearts beating in unison with the dome,” he adds. It may only be early March, but the sun feels warm on our backs, and Shodoshima smells uncannily like Provence with its mediterranean climate. All of a sudden, the pace of life slows down. You take off your thick winter coat and start to enjoy life. This mild climate must have contributed to Patrick Tsai’s decision to leave Tokyo for Shodoshima in September 2014. He’s a young man of Taiwanese origin, born in the United States, and who first travelled to Japan for an art project in 2012. Tsai is a photographer, but also teaches English and works as a tourist guide every now and then. As versatile as a Swiss Army knife, he has a lot to look forward to with the approaching festival. “I love it here, I got a very warm welcome. It’s harder to settle on a little island than in a huge metropolis, but I have a feeling it’s made me stronger,” he admits. It was thanks to the festival that he first discovered the place in 2013. “I stayed five weeks on a business trip. The people I met were so friendly that it made me have a rethink”. As a result of this experience, Tsai left the publicity agency he was working for to join the little community. This time he’s on the other side of the fence, and he will be the one welcoming the visitors and artists to this year’s festival. “The local community of artists is quite large in Shodoshima. We’re very supportive, and many of us benefit from the triennial by presenting our work to an international audience. It’s really exciting” he enthuses.

2016 marks the third Setouchi Triennial of contemporary art. Seven islands situated in the Seto inland sea separating Honshu and Shikoku took part in the first event, then in 2013, twelve islands welcomed more than a million visitors at three key moments during the year (spring, summer and autumn). This year, local teams will be offering visits and performances over a total of 108 days. For 2016 the organizers have chosen to display the artwork in the same 14 locations that were successful in 2013: Naoshima, Teshima, Megijima, Ogijima, Shodoshima, Oshima, Inujima, Shamijima (only during spring), Honjima (autumn), Takajima (autumn), Awashima (autumn), Ibukijima (autumn), and last but not least, the ports of Takamatsu and Uno. You will need several days if you plan on visiting all the locations across the various islands, depending on the season. The first group of installations will be revealed in the spring, but the main attraction takes place during the summer, when the maritime climate is at its most enjoyable – perfect for an artistic journey around the islands. This isn’t the Inland Sea’s first experience of contemporary art and architecture though. In addition to this festival, the local museums are renowned as some of the best in Japan, and they are open all year around (Teshima, Naoshima). One of the top places to visit is Fujimoto Sou’s Naoshima Pavilion, an architectural treasure that was completed last year (reference: 50 people who make tomorro’s Japan, March 2013 supplement to Zoom Japan, pp. 92-93). Fashion designer Koshino Junko will also be holding workshops on Shodoshima. On Ogijima, Brazilian artist Regina Silveira will reflect on notions of space, and Otake Shinro will be taking over an abandoned needle factory on Teshima. A large exhibition on Megijima Island will present all there is to know about the local art of bonsai, of which Kagawa Prefecture is Japan’s main producer. This triennial will also highlight local culinary specialities. The little island of Teshima (population 900) will be featuring its “Shima Kitchen” event again during the festival, when locals invite visitors over to taste their local dishes. There’s even a special surprise waiting for those who are celebrating their birthday at the time of their visit. For those who wish to prolong the experience, several families are even offering bed and breakfast accommodation.

Five artists from India will be collaborating with Japanese teams on the “Shodoshima-cho Future Project” directed by Tsubaki Noboru. The idea is to think, explore and invent means of renewing the local economy. The festival offers a window of opportunity for the elected local representatives to express their concerns relating to the future of their rural islands. “Over the course of their history, each one of these islands, ideally situated at the centre of an important maritime economy, has been able to learn from new cultures, and create their own particular and unique identity,” says Shiota Yukio, mayor of Shodoshima. “Unfortunately, our islands are dying because of the ageing population, and the exodus of young people to the big cities. By organizing this Triennial, we hope to re-energize the area and encourage visitors to our region to learn about its history, its heritage and its culture, so that the Seto Sea becomes a sea of hope for the world”. “We need to open up more to international influences. Our children need to speak English,” the mayor adds. Patrick Tsai is very aware of this, and knows that a lot is expected of him, but he remains strongly committed and doesn’t regret the decisions he’s made. “I am proud to promote this island’s charms. I have received a lot from Shodoshima, so it’s natural for me to give back something in return”.