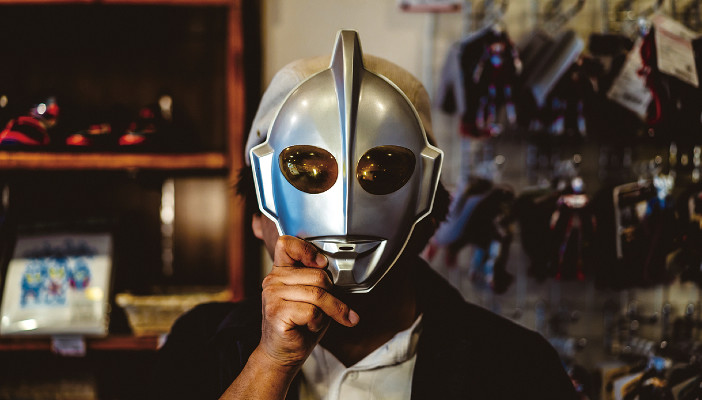 Since the character was first shown in 1966, the various Ultraman series have enjoyed a unprecedented level of popularity in Japan.

The good folk who live in Soshigaya, a quiet district in the Tokyo suburbs, can sleep peacefully, as Ultraman watches over the neighbourhood. The superhero’s red and silver statue stands in front of Soshigaya Okura Station, next to a police box to scare away reallife baddies. It’s here, just in front of the statue, that I meet Q-chan Matsuo, one of the world’s foremost experts on Ultraman and the man behind Koseki, arguably the best Ultramanthemed website. He chose Soshigaya as our meeting place because it was here that the old Tsuburaya Productions’ studios stood.

Do you remember your first encounter with Ultraman?
Q-chan Matsuo: I was born the same year that the original show appeared on TV, and I honestly can’t remember a moment when Ulraman was NOT part of my life. That series was so popular it averaged an audience share of over 30% and it was a particularly big hit with children. You knew when Ultraman was on TV because suddenly all the kids disappeared from the streets. Everybody would run home to catch the latest episode. Among them were my cousins who were older than me. From them, I learned a lot of things about Ultraman, and even played with their toys. I was also particularly lucky because I could watch the original show in colour as my family had a colour TV – something that was far from common at the time.

Which series is your favourite?
Q. M.: The first Ultraman. Maybe it’s because of the huge impact it had on my generation, or because of its quality (they put a lot of money and effort into it), but it feels special.

From the 1960s to the present, each decade has had its own Ultraman series. In your opinion, how has the show evolved through the years?
Q. M.: While Ultraman’s basic themes and story haven’t changed that much, each series has adapted to the changing times. The 1960s, for example, was the age of optimism. The future was bright, man was going to the Moon and people believed in the positive role played by science and technology. All this was reflected in the first few series and other similar TV shows, like the British Thunderbirds. But once we entered the 1970s, we had a recession, the oil crisis and many pollution-related problems, especially in Japan. Consequently, the Ultraman stories got darker, and even the monsters were less cute, more menacing than their predecessors.

How about Ultraman X, the most recent series?
Q. M.: What I’ve noticed more than the story itself is the way the look of Ultraman has changed. When you consider the original Ultraman, it’s a very simple design with a simple colour scheme, but recently they have added more features. When I was a kid, drawing Ultraman was quite easy, but now you have to pay attention to many small details; it’s become more complicated and it feels a little strange, at least to someone like me, who belongs to an older generation.

Your website is a treasure trove of Ultraman-related information. When did you start it?
Q. M.: About 15 years ago.

What does the name koseki (光跡) mean, and why did you decide to embark in such a monumental project?
Q. M.: Koseki literally means “Light trail”. The Light is a symbol for Ultraman himself, and the Chinese character for “trail” (跡) literally means a trace left behind, and is the same one you find in such words as “remains” or “relics”. In other words, I wanted to record and save as much information as possible before it disappeared for good. It all started when I looked for some information online and I couldn’t find it anywhere, so I decided to gather all these facts and data. For me, this is also something I want to leave for new Ultraman fans, for example the kids who are now in elementary or junior high school and know little or nothing about the old series and toys. It’s a way to pass on all this knowledge to the younger generation. In a sense, it can be considered as an Ultraman encyclopedia. Actually, next January the server that supports my website is closing down, so I have to find a new place for my website. I’ve already begun to work on it, but I don’t know how long it will take.

Why do you think Ultraman, more than many other series, has maintained such a loyal fan base?
Q. M.: For one thing, Ultraman, particularly in the past, was a very funky, quirky show, although now all the episodes are straight ‘good versus bad’ battles. Take, for example, the work of director Jissoji Akio. He was particularly famous for directing Ultraman (1966-67) and Ultra Seven (1967-68) and had a distinctive visual style. But even more than that, his storytelling was unique, especially for a TV show aimed at children. [Q-Chan shows me a book titled “Ultraman’s Tokyo” written by Jissoji]. On this book cover, for example, you can see the skeleton of a dead alien monster. This is the episode where they have to return the skeleton to its planet for some reason that is never quite explained. It’s just weird! Another reason for Ultraman’s popularity is that, in contrast to other superheroes, Ultraman doesn’t see the world in black and white. For example, not all the monsters he fights are really bad. There are times he sympathizes with their plight and faces many moral dilemmas, like when he has to fight against the sole survivor of a planet that was destroyed by a careless weapon test. This, I believe, is one of the main reasons why so many kids have developed such a special attachment to Ultraman. Maybe when they are young they’re not really conscious of the moral implications or don’t get all these nuances, but when they grow up they are able to get a new and better appreciation of the story. Another interesting thing is the way the fans’ attachment to the show extends to the monsters. I believe Ultraman is the only franchise where the fans love the ‘enemies’ almost as much as the superhero. And people who aren’t even very familiar with the series know at least a few of the monsters, like Baltan or Pigmon.