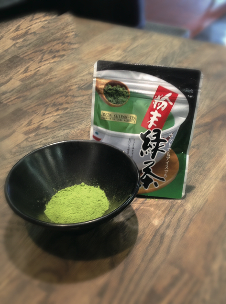 Ikeda’s quality ryokucha proves that not all powdered green tea is the same.

In recent years, powdered ryokucha green tea has been highly valued for its ability to be enjoyed as a casual drink, hot or cold. Although both powdered green teas, powdered ryokucha is quite different from the fine grained maccha used in the traditional tea ceremony, with the latter taking tea leaves grown in shaded spots known as “tencha” and powdering them, while powdered ryokucha uses coarse bancha or medium-grade sencha leaves grown in direct sunlight. This particular form of tea has its origins in the post-war period, as a powdered form of the low-grade bancha leaves, and was used as a cheap drinking tea, for cooking and in soap making,

The taste of a powdered ryokucha and the effects it has on the body are strongly influenced by the quality of the tea leaves used in its making. The blend introduced this month, Ikeda’s Satsuma Yabukita Funmatsu Ryokucha, comes from the famed Chiran tea growing region of Kagoshima prefecture and is made from top quality grade sencha leaves. It easily sweeps away any preconceptions people may have had about powdered ryokucha having a cheap and unappealing flavour, and lets you enjoy a delicious cup of green tea with a fresh, vibrant colour and deep flavour. A great cup can be made from a surprisingly small amount of powder, and it even dissolves in both hot and cold water. The aroma rivals that of high quality macchas, and in recent years it has enjoyed popularity through many different uses, such as an ingredient in snacks like sencha biscuits, or as a mixer for alcoholic drinks. Powdering the sencha leaves retains all their nutrients, making this tea very good for the drinker’s health, and it even protects against intestinal cancer.