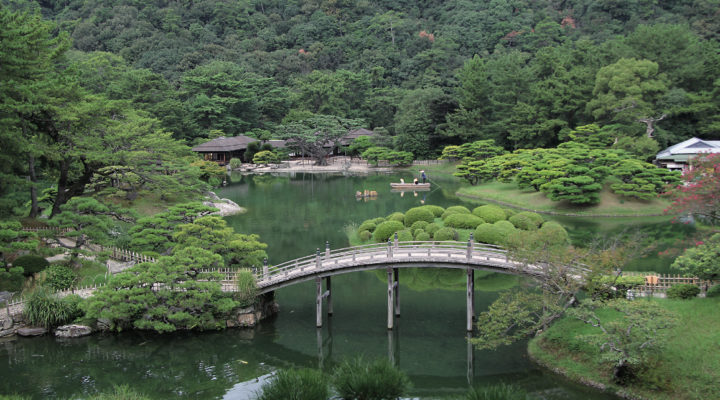 People from Takamatsu consider the Ritsurin Garden to be the one of the most beautiful in the country.

Although most famous for its pilgrimage of 88 temples, this island has many other hidden treasures.

According to the inhabitants of Takamatsu, a city in Kagawa Prefecture in Shikoku, Ritsurin Koen is the fourth most beautiful garden in Japan, just behind the gardens of Korakuen in Okayama, Kenrokuen in Kanazawa and Kairaku-en in Mito. You only need to visit any of these gardens to understand the Japanese’ enthusiasm for a beautiful landscape. Ritsurin is huge, stretching over 76 hectares, and has been landscaped to create a view of Mount Shiun, the mountain overlooking the garden. At the time of its creation in 1620, like any self-respecting prefectural lord’s garden (daimyo teien), it was used as a ground for horse riding (baba), and also included areas devoted to fishing and duck hunting (kamoba). The garden was designed by Ikoma Takatoshi who governed the plains of Sanuki (The old name for Kagawa Prefecture) at the time. It took a century to complete and then became the property of the Matsudaira Yorishige family between 1745 and 1820, finally being opened to the public in 1875 when Emperor Meiji came to power.

Nowadays it takes 30 full time gardeners working every day to look after the sixteen hills, six lakes and the various stone arrangements of all shapes and sizes that make up the landscape. Every step of the way reveals another spectacular view. You can board a ferry at Nanko or from the lakes to discover the gardens from a different angle. Various tea houses offer places to relax and contemplate the beauty in the traditional seated position, with the Kikugetsu-tei tea house by the lakeside having one of the best views of the garden. 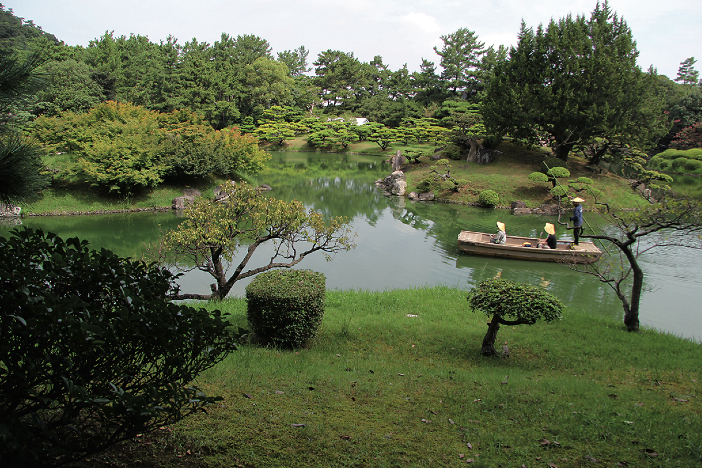 Another way of discovering the Ritsurin Garden is from a boat.

Mount Shiun can be seen from Kandaka Keiichi’s tree nursery. He and his son Kohei, 26, are the fourth and fifth generations of bonsai specialists in their family. His company, Bonsai Kan daka Shojuen, is located in Kinashi, not far from the centre of Takamatsu. Many of their bonsai are over 100 years old, and the local favourite is the nishiki matsu (rainbow pine), a species from Takamatsu that’s related to the kuro matsu (the black pine) and recognizable by the very aged appearance and texture of its bark. “Some specimens were collected on Mount Shiun,” says Kandaka Keiichi. “We continue to grow them. The branches have a natural tendency to grow upwards, so we adjust their stems with steel wires to encourage them to grow in different shapes”. The pruning is undertaken with surgical precision, but Kandaka can’t explain why he cuts one branch rather than another. “It’s instinct. I’ve done this my whole life. I just know, that’s all,” he smiles. His nursery includes some amazing specimens, such as the dojo iri, with branches that grow into green carpet-like forms. Patience and care are the key words of a bonsai specialist. “It takes 20 years for a little bonsai to grow into a perfect shape and size. The first phase alone, called the hydration period, takes 10 years”. Mr. Kandaka is a bit perplexed when asked to pick his favourite bonsai from among the hundreds that surround him, “I don’t know. There are so many! I love them all.” he says. Kagawa is the second greatest bonsai producer in Japan. With 200 years of know-how, the prefecture exports all over the world, including to Europe. 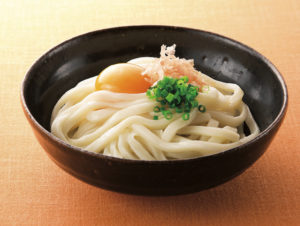 The region is fiercely proud of its udon.

When it comes to food, this rural prefecture swears by udon (wheat flour noodles), which can be found everywhere and is prepared in every possible way throughout the plains of Sanuki. You can even learn how to make them yourself in a restaurant in Kotohira, a village to the west of Takamatsu. If you’re prepared to follow “Matchen sensei’s” instructions and ready to have your hands covered in flour, then this unique cookery lesson could just be the thing for you. The course if full of surprises and takes place in a relaxed atmosphere. As a souvenir, you even get to take home a diploma in udon-making, as well as the knowledge needed to enjoy (or not?) your own homemade noodles.

The Nakano udon school is located at the foot of Kompira-san, a Shinto shrine situated at the top of Mount Zozu. This pilgrimage has been popular since the Muromachi era (1336 to 1573), but it’s a difficult hike, as there are 785 steps up to the shrine and the incredible panorama over the pains from the top of Mount Zozu. On the way down you can stop at the Sonpira Oshiba kabuki theatre, built in 1835 and said to be the oldest theatre in Japan. The building alone is worth a visit, and it’s open all year around, although there are fewer performances in April.

The path through the Shikoku gardens will lead you further west, towards the city of Kochi, the main city of the prefecture whose name it bears and home to the Makino Botanical Garden. It was opened in 1958 and it boasts a collection of 3,000 species of plants, among which are many of those discovered by Professor Makino Tamitato himself. This legendary botanist dedicated his life to plants and his all-consuming passion for botany led him to classify over 400,000 species, of which he discovered 1,500 himself. He chose this location to establish a garden in the mountains with a full view of the moon at night. Unfortunately, Makino died the year before his garden was completed and opened to the public. There are medicinal plant gardens, innumerable flowers, picnic areas and a museum dedicated to the Professor’s work at the Makino Garden. There’s also a laboratory where species collected from all over the world are still studied and recorded to this day. 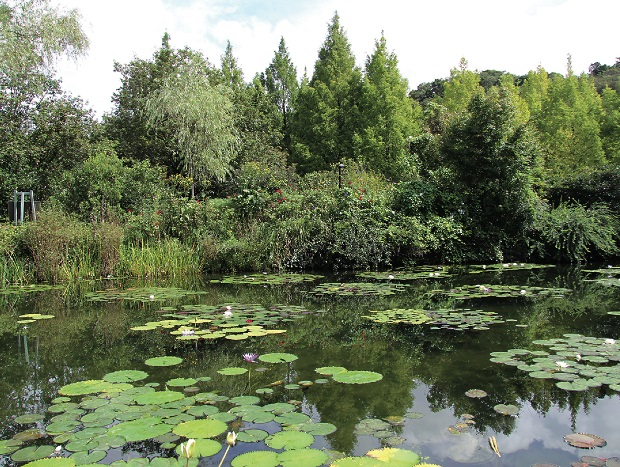 You can see blue water lilies, a flower that was very tear to Claude Monet, in Kitagawa’s Marmotten garden.

A few kilometres away is a flower garden that became famous when it was awarded 3 stars in the Michelin Green Guide in June 2015. This unusual garden is the Monet Marmottan, found in the little village of Kitagawa. The 1,500 local inhabitants reproduced Monet’s garden at Giverny with an iconic flower that filled the painter’s imagination, but which ironically didn’t exist in his French garden: the blue water lily. All summer, right through until the end of September, crowds swarm to see them in bloom. “We are the only ones in the world outside of Giverny who have the right to use this species,” says Matsushita Kosaku, director of the Monet Marmottan garden. Monet’s Kitagawa garden is divided into three parts: the flower garden, the water garden where the lilies grow, and the garden of light, which was inspired by Monet’s paintings during the course of a journey to the Mediterranean cost with Renoir. The park covers 30 hectares and boasts over 55,000 species of plants, with exchanges having been arranged with France. “Giverny has had its own Japanese maple trees for three years now,” says Kawakami Yutaka, the head gardener.

To relax after all this walking, we recommend that you visit the Hirome ichiba in Kochi, a huge indoor market where you can taste just about any regional specialty, whether raw oceanic bonito, whitebait with a yuzu beer, or even sweet potato fries. Don’t miss out on the city’s Sunday morning market, famous across Japan for its diversity. Fruit, vegetables, fish and all kinds of pickles are sold along a 3 kilometre stretch. You must brave the queue to be sure of tasting the famous imo-ten: sweet potato doughnuts that are to die for. Then you will want to queue again for the vegetable sushi.

Opening the doors of a temple or a restaurant can lead to the discovery of some incredibly beautiful gardens, as is the case at Chikurinji temple where you’ll find two. The Kao no niwa restaurant also has a garden worth visiting, and it’s famous for having been the home of the woman with whom the famous samurai and national hero Sakamoto Ryoma, himself a native of Kochi, was madly in love.

If you have some time left on your hands, travel a little further to Ehime Prefecture where the Tensha-en Garden, which dates back to the Edo era, has over 2,000 iris in bloom every May. We also recommend the Garyu-sansu Villa located in Ozu, where Mount Tomisuyama and the Hiji River come together in the building’s very traditional Japanese sukia-zukuri-style architecture, whose beauty inspired the style of many tea houses.