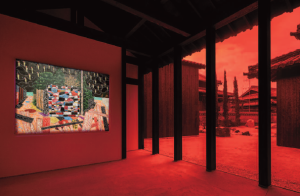 Far less well-known than Naoshima, Teshima in the Inland Sea has many surprises in store.

For several years now, contemporary art lovers travelling to Japan have been visiting Naoshima whenever they can. This island situated in the Inland Sea has become the symbol of the potential to turn an industrial wasteland into a leading artistic centre with help from renowned architects and artists working for the Benesse Corporation. Naoshima has left anonymity behind for 20 odd years now, to become a highly regarded artistic location. Ando Tadao’s amazing buildings, including the Chichu Museum (Chichu bijutsukan) have contributed to putting Naoshima on the map and into in tourist guides. In 2010, the creation of the Setouchi Triennial international art festival brought the place to the attention of the whole world, so much so that foreign visitors now rush to see Kusama Yayoi’s artwork or Sugimoto Hiroshi’s restored shinto shrine. Shikoku’s local authorities, on which the island depends, are delighted, all the while regretting the fact that Naoshima’s success isn’t that closely associated with their region.
They are trying to correct this by reminding people that Shikoku has more to offer than just Naoshima. Indeed, other less famous islands have benefited from the benevolence of Benesse over the past few years, one of its principles being “use what exists to create what will be,” and in 2010 it became involved with Teshima, to continue its mission of transforming declining locations into dynamic centres full of life (the population had dropped from 2,700 souls to a mere 1,000).
After only three years, it is not an exaggeration to say that the little island between Naoshima and Shodoshima has burst into colour, specifically the same bright colours that graphic designer Yokoo Tadanori has used for the house he helped renovate and that opened in July 2013. Just two steps away from Ieura harbour, the Teshima Yokoo House is a gem that rose from the collaboration between the designer and architect Nagayama Yuko. Nagayama Yuko has also renovated another old house facing the harbour.

The original character of the buildings was respected, but she added elements such as a cylindrical tower in which the artist invites visitors to lose themselves in the midst of hundreds of pictures of waterfalls. The continual play of colours and light on mirrors in this little space offers visitors a subtle spatial experience of emptiness. In other areas of the house, a strong impression of confinement dominates instead. A good example of this is the small, dark attic with a purple painting in which an egg is about to explode. Elsewhere in the house the play with light creates other sensations in relation to space. Red dominates in some parts of the house and from a distance, it might give the impression of an apocalyptic universe, but that isn’t the case. Yokoo Tadanori shows that art is crucial. His multicoloured paintings burst into life thanks to the astonishing use of non-filtered light. When you enter the main house and reach the largest room that contains three of the artists’ paintings, you walk across a glass floor designed by the architect and under which runs a little river. If you want to look closely at this work, both the serious and humorous, characteristic of the designer’s style, you need to stand on this transparent floor, which gives you a sensation that you are floating in space. What can one say about the garden and rocks that are also painted? Red dominates yet again on a background of lighter coloured soil. You get the impression that the environment changes with every second. The light, the clouds, the sky and the wind all contribute in their own way to remind one that everything can change in a flash on an island such as this and that everything is continually renewed.

This is the philosophy behind the Teshima Art Museum, the first art project conceived in Teshima in October 2010. Once again, it is the fruit of a collaboration between an architect, Nishizawa Ryue, and an artist, Naito Rei. Placed at the top of Karato Hill, overlooking the Inland Sea, the project symbolizes the desire to give a crucial role to the elements in artistic creation. To this end, the visitor is invited to walk down a concrete path whose route encourages you to be aware of where you are standing. Wind is ever present, as well as water, with the view over the sea to the horizon. After a few bends, you come to a strange smooth concrete construction that symbolises the moment when a drop of water comes into contact with a surface. Even from a technical point of view the building is impressive. It fits perfectly into the landscape, yet it is intriguing. It is also necessary to put on slippers before entering, which makes you even more curious. Yet on walking into the empty space dominated by two large openings, through which the elements can be seen in full flow, you feel somewhat let down. However, this rapidly gives way to wonder. Tiny drops of water appear on the ground of the huge bubble. They move across the ground and create changing shapes according to the wind and the light. All of a sudden, the visitor realises he is standing in the middle of a living work of art that is changing before his eyes. It is an astonishing and captivating sensation and you could spend hours just watching the beads of water meet and form bigger puddles that are able to jumble up the existing order. Only in Teshima can you take part in such an experience. So next time, forget about Naoshima and head straight towards Teshima.