From this month onwards, this column will introduce useful Japanese phrases that cover a variety of topics, such as ordering and describing food, asking for directions, shopping and many more.

By familiarising yourself with these phrases, it’ll make your time in Japan more immersive, more fun and make the locals smile!

But before we start learning phrases, I would like to introduce the different characters used to write Japanese, because that is first thing you will see when you arrive at the airport in Japan!

Many people might imagine that Japan is full of signs written in English, but actually this is less common than you would expect. Major cities and towns are now busily constructing signs in English in preparation for the upcoming Olympics in 2020, but more rural parts will remain traditionally signposted.

There are 3 types of characters used in the language; Hiragana (ひらがな), Katakana (カタカナ) and Kanji (漢字).

Firstly, Kanji, meaning “Chinese characters” was brought to Japan from China around the 4th Century (Yes, we didn’t have an alphabet until then, so thank you China).

On top of that, Arabic numerals and the English alphabet can also feature in sentences.

Here is an example: 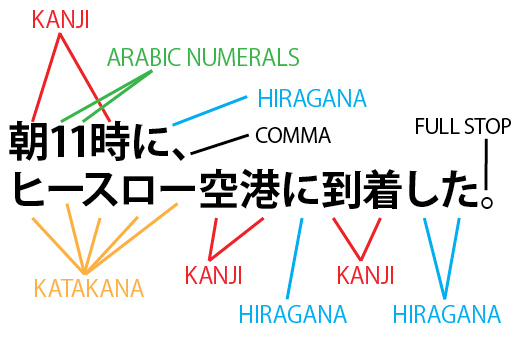 You can often find 4 types of characters; Hiragana, Katakana, Kanji and Arabic numerals, in one sentence, such as the one above, which means “I arrived at Heathrow airport at 11am.”

You may have already seen some of these characters around the UK, in the form of Japanese restaurant names, shops and in your favourite anime!

Don’t panic, you don’t need to learn all three writing systems before your next trip…that would be insane! Instead, I will teach you a magic phrase to help you get by in Japan.
Simply point at an object and say

The locals might read outlooks whatever you point at!

Next month we will sink our teeth into Japanese cuisine.

▶ Here’s more information about Japanese characters and phrases and etc.
MARUGOTO Plus – Introduction to Japanese
http://a1.marugotoweb.jp/

▶ ‘Minato’-learn Japanese and interact with fellow students around the world online.
https://minato-jf.jp/