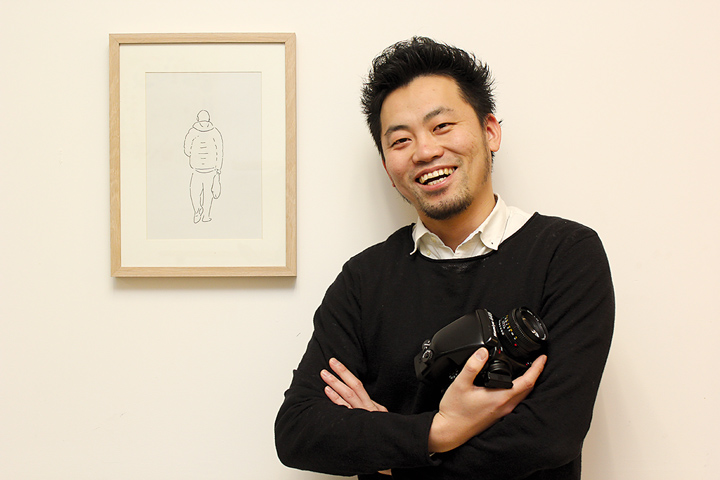 Since December 2011, Masuda Hirofumi’s mission has been to photograph daily life.

The small glass studio in a street in the heart of Ishinomaki is occupied by artist Masuda Hirofumi, originally from Sayama in Saitama Prefecture, north of Tokyo. After working as a volunteer supporting the arts following the 2011 earthquake, he decided to settle down here for good in December of the same year. “Like other artists, the experience of the earthquake made such an impact on me that I wanted to come and live here and observe the city,” he explained.

Since then, he has been working continuously with the same idea in mind: “Citizens’ memories through meals.” “Canteen series” is representative of his work. It aims to depict detailed day-to-day scenes of city dwellers in their different settings at mealtimes. It’s a vast project to preserve and reveal a wide range of individual memories, but also the memory of the neighbourhoods, which disappear over time. All this is achieved through snapshots of meals, which are essential for everyone from whatever social, racial, or religious background they come.

For this artist, it all began with an old camera he used in primary school, which he had left behind in his first home. At that time, he would take photos of the planes and the landscape around the neighbouring military base in Iruma. He also used it on several of his trips to the United States and South Korea after leaving high school, but while still taking correspondence classes. During his time in America, following the 9/11 terrorist attacks, he witnessed with his own eyes the rise of tensions between races, religions, people from different ethnic backgrounds, etc. It was then that he realised “it’s only by living somewhere that you notice elements, details which you would not be aware of otherwise.”

Returning to Japan, and after having left high school, he enrolled in the Yokohama College of Art and Design. Then he had different jobs as a photographer in Yokohama, in the “hot” district of Kogane, which was being completely transformed by a redevelopment project “because it seemed that not only the buildings, but also the history, culture, even the neighbourhood’s residents, were disappearing.” This sentiment reappeared latterly in his work “Canteen Series.” Then the Since December 2011, Masuda Hirofumi’s mission has been to photograph daily life. SERIES The keeper of memories earthquake on 11 March 2011 happened, completely disrupting a great number of districts in the cities of Tohoku. He headed there straightaway to help as a volunteer to clear up the mud and, as an artist, with the aim of “preserving as many as possible of the memories of these neighbourhoods.” When a local Yokohama organisations chose to set up a centre to support art projects, he was one of the first to come to Ishinomaki. At the end of his three month contract, he decided to stay as he felt that “I should settle here and live in this devastated city.” Five years have gone by, and it’s now as a “citizen of Ishinomaki” that he has been able to make friends.

“We are quite spoilt here: we not only have the sea, the mountains and the rivers… but, in the sky, we also have the privilege of watching Blue Impulse, the famous acrobatic patrol team of the Japanese self-defence forces,” he explained. These are no longer the words of a volunteer passing through. “Because I live here, I’d like to show that an artist from a region like Ishinomaki can speak to the whole of Japan,” he said. For the artist Masuda, Ishinomaki has become his main field of action.