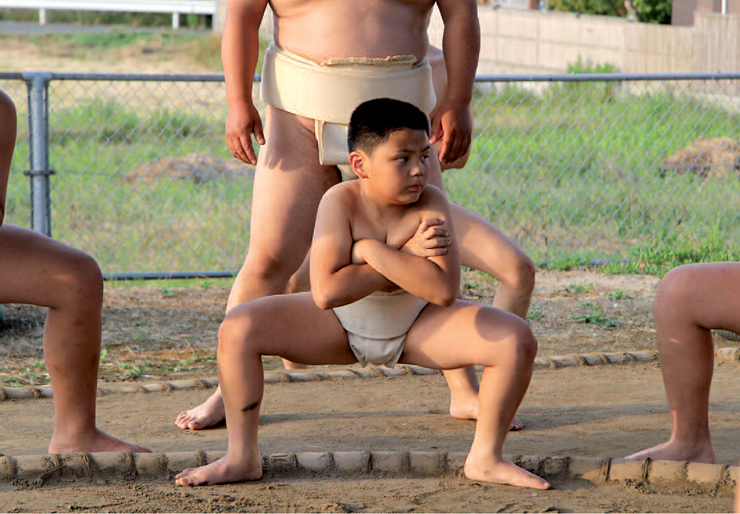 The tradition is nurtured from a very young age on the Oki Islands.

To find out more about the origins of this very popular sport, you need to travel to the west of the archipelago.

It’s nearly 6.30pm in the village of Goka, on Dogo, the largest of the Oki Islands in the prefecture of Shimane [see Zoom n°31]. There, at the heart of the luxurious countryside of the UNESCO listed geo-park, two dozen children between the ages of 8 and 16, wearing only mawashi, the traditional sumo belt, are standing in the dohyo facing the sunset. The atmosphere is friendly and the setting exceptional. By day, Fukura Keiichi is a fireman on the island where he grew up; in the evening, he trains budding sumo wrestlers. He himself started at the age of 5. “In Okinoshima, we all start practising sumo at elementary school. It’s always been this way, it’s a very popular sport, especially in our village. We train, and then we eat together after the session. Most of us don’t become professionals. It’s just for pleasure, a hobby that we like to share. It’s also a way to teach children about respect and manners.” Sometimes, they compete against each other in competitions. “I won a few titles when I was younger. I stopped, and just recently started taking part in tournaments again. I’m proud to represent the community,” he smiles.

That evening, the young people prepare for the island’s annual championship. It’s open to everybody, with no age limit. In a building near where they practise, children and young adults are getting changed to start training once the younger ones have finished. There are delicious smells of freshly cooked rice, vegetables and fish: families are busy in the kitchen preparing dinner for the wrestlers after their practice. But, for the moment, the children are still saluting and rushing head down into their trainers who are encouraging them to makes the correct moves — how to balance properly on their legs and how best to place their arms. Among them is Naka-nishi Kotaro, aged 13. “It’s a difficult discipline, but I like it,” he confides. “I really like competition, and I am very happy to take part in this championship. I’d be so proud to be the best in the district.” Among his idols he names yokozuna Kisenosato (who reached this highest-possible rank last January. He’s the first Japanese sumo to have reached this level since 1998, which was quite an event). “He’s a person of integrity who remains true to himself and doesn’t change.” Although he loves the discipline, he isn’t planning on making a living from it. “The most important part for me is the training, the time spent with friends. I don’t want to turn professional; later, Id like to become a teacher.” 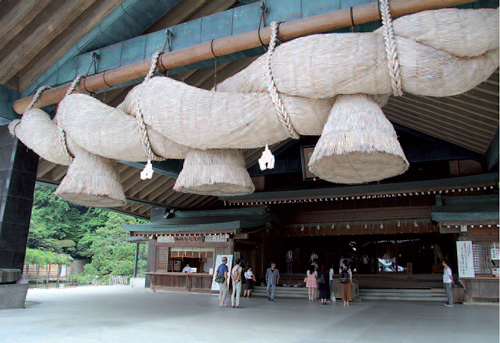 The impressive twisted rope of Izumo Taisha, one of the country’s oldest shrines, is a reminder of the
close link between sumo and the Shinto religion.

In Okinoshima, sumo tournaments attract large crowds. The local population always looks forward to them and enjoys them immensely. In parallel to the yearly championships, a more classic tournament, the Koten-sumo or “ancient sumo” is arranged whenever there’s some good news for the islanders to celebrate. It’s a way of thanking the gods for good fortune. For example, Koten-zumo may be organized when a new school or an airport opens, or when the roof on Mizuwakasu temple is replaced every 20 years.

Last time a Koten-zumo took place was in 2012 to celebrate the inauguration of the island’s hospital. The next one will happen in 2020. This tournament, so dear to the Oki islanders, is an intense physical ordeal, during which the wrestlers compete against each other over two rounds. It starts at dusk, and the winners are crowned the following morning. The entire island takes part. The winner earns the title of ozeki (champion). The four best wrestlers are given the pillars used to support the wrestling ring’s roof during the tournament to take home. Nagami Osamu, national referee for the Japan Sumo Association, always eagerly awaits the tournaments. He remembers the event that took place on 4th November 1972 with emotion. “The tournament started around 5pm. 300 wrestlers took part and there were about 2,000 people in the audience. They stayed until 12pm the next day. It rained at times during the night, but no-one thought of leaving. The fight stopped for a few moments, then restarted. The atmosphere was incredible.”

The inhabitants of Oki are attached to this sport because it’s also related to their local history. It was in the prefecture of Shimane, where the island is located, that the sport originated, specifically in Izumo, a town on Honshu, the main island of the Japanese archipelago. It is the cradle of ancient Japan, and it was on Inasa beach that the first wrestling match ever took place, over 1,300 years ago. “The Kojiki (“Records of Ancient Matters” compiled during the 8th century) refers to the myth of Takemikazuchi and Takeminakata, two divinities who are thought to have fought each other on this beach in a test of strength,” explains Shinagawa Toshihiko, curator of Izumo’s prefectoral museum located next to the famous Izumo Taisha Shrine. In another work from the same period, the Nihon Shoki (“The Chronicles of Japan” drawn up in 720), there is a reference to a fight between two men, Nomi no Sukune, native of Izumo, and Taima no Kehaya, considered, according to the Emperor, to be the strongest man in the region. At the time the sport wasn’t called sumo; it was a violent martial art that involved killing with one’s bare hands. Nevertheless, Nomi no Sukune, who defeated Taima no Kehaya, is considered to be the founder of sumo. In 2013, Nomi no Sukune was allocated his own shrine within the Izumo Taisha enclosure. 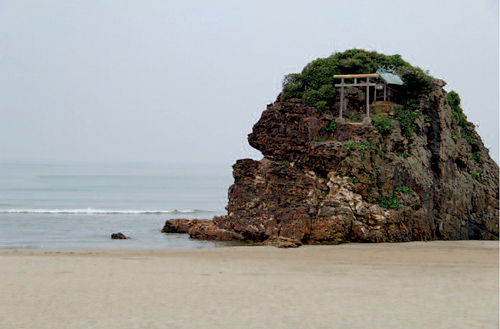 The first sumo fight is said to have taken place on Inasa beach. 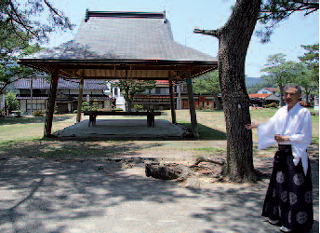 IMBe Masataka outside the Mizuwakasu dohyo.

In Japan, sumo is far more than just a national sport, it’s also closely related to religion. This explains the importance attached to the ceremony that takes place before the fight, and the throwing of purifying salt onto the sacred dohyo. The wrestling is considered to be an offering to the gods. The highest rank a wrestler can possibly reach, yokozuna, is the equivalent to being a demigod. Mizuwakasu Shrine has its own permanent dojo. It’s built on three levels to allow one to be “closer to the gods who give their protection in return,” explains the guji (head priest), Imbe Masataka. In Japan, the tradition of sumo practice taking place in shrines has existed for over 800 years.” At that time, one did not yet speak of yokozuna but ozeki, or champion. Then came sekiwake and komusubi, distinctions that are still used in the Koten-zum of the Oki Islands.

The term “sumo” did not appear until several centuries later, around the 5th century, in another edition of the Nihon Shoki. “This depends on interpretation, but the word does seem to have appeared for the first time in these chronicles. The Emperor wanted to challenge the craftsmen who claimed that nothing would distract them from their work. In an attempt to contradict this claim, he replaced the wrestlers with naked women and asked them to fight each other. This did indeed have the effect of distracting the craftsmen, who ended up damaging what they were making.” It’s ironic that since then women have never been allowed in a dohyo. “Yes, it is an ongoing debate in Japan. More and more women train, but they aren’t allowed to enter a dohyo, because women are considered to be impure. To change this, the wrestlers themselves need to ask for women to be allowed to enter a dohyo. Otherwise, I don’t see how the situation can ever change.”

In the past, wrestlers were essentially domestic servants who belonged to an estate or to a lord who would ask them to fight for his own pleasure. “In return, they were housed and allowed a small salary with a bonus when they won tournaments.” Many etchings depict these sumo fights arranged by feudal lords such as Oda Nobunaga. “In the Middle Ages, sumo was practised alongside bukaku (ancient dance form), or the dance of the lions (a local tradition from Shimane Prefecture). As such, sumo was elevated to a form of art.”

In ancient Japan, “there weren’t clear criteria and rules like those that exist nowadays for becoming a yokozuna. It was an honour given to an exceptional wrestler, but no-one knows who the first one was,” says Shinagawa Toshihiko. It was only at the end of the 19th century that Kyugoro Jinmaku (1829-1903), the only yokozuna to come from Shimane Prefecture, suggested the current ranking system. Nowadays, Japan still recognizes Shimane as the region that gave birth to this discipline. The thick twisted rope that makes up the yokozuna’s belt is a reference to the “rope that decorates the entrance of Izumo Oyashiro Shrine, better known as Izumo Taisha, one of the oldest shrines in Japan”.

▶How To Get There
The ports of shichirui, shimane prefecture, and sakai minato, Tottori prefecture, connect the oki Islands by boat.
from Tokyo, catch the shinkansen to okayama (3h25), and then the Yakumo express to matsue (2h22).
Then it’s a 40 minute bus ride to shichirui (1,000 yen). To get to sakai minato, it’s the same journey until you reach okayama. Then catch the Yakumo express to Yonago (2h09), and get the sakai line to the terminus (43 minutes). The cost of the crossing by ferry starts at 3,240 yen, or 6,170 yen by speed boat.
There are no direct flights between Tokyo and the oki Islands. You need to get a connecting flight at Itami airport in osaka.
flights total two hours from Tokyo to the oki archipelago via osaka with japan airlines. a return ticket costs around 70,000 yen.

No50 Setouchi, a whiff of the aegean sea