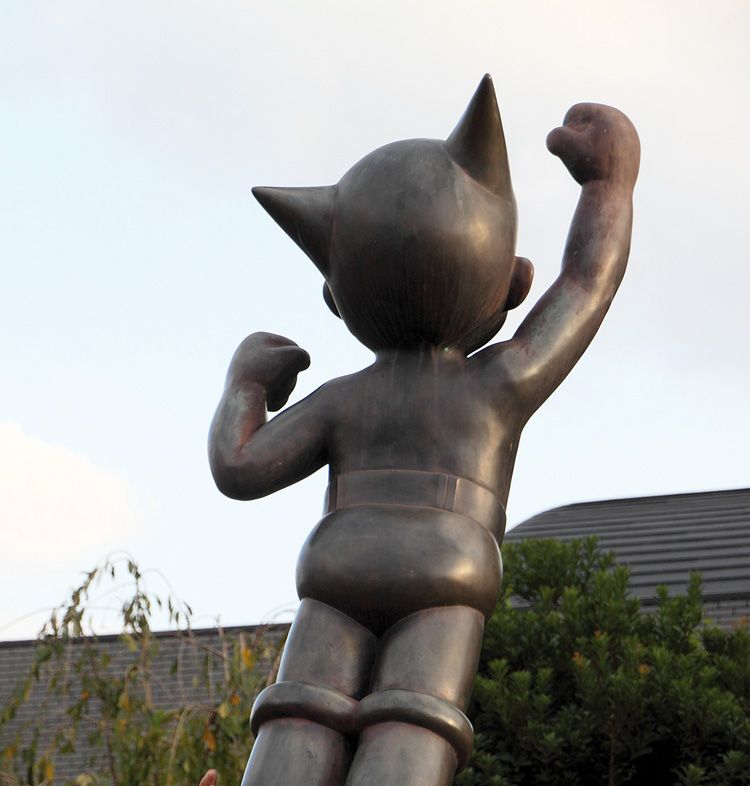 This character made Tezuka a legend in Japan and throughout the world, so naturally it’s been immortalised.

Ask any anime fan if they know Hanno and they’ll tell you it’s the location for the Encouragement of Climb manga and TV series. The story is so popular that in the last few years this small town in Saitama Prefecture has attracted an endless stream of “pilgrims” who visit the places featured in the anime. A typical pilgrimage takes you to Central Park, where most fans take a few pictures of the playing area before moving to another spot. Little do they know that the park is home to another important piece of anime history: the only Mighty Atom statue in the world. Since the bronze statue was completed in 1983, few people besides hardcore Tezuka fans have been aware of its existence. But how did it end up in such a place? In order to unveil the mystery you’ll have to visit Noguchi no Tane (Noguchi Seeds), a small shop specialising in seeds of traditional vegetables, and talk to the owner, Noguchi Isao. Noguchi is a former employee of Tezuka’s company, Mushi Production, and the man who gave Hanno this unique statue.

A Tezuka fan since he was a child, Noguchi finally landed a job in the company’s publishing department in 1964. “My first job was editing Tetsuwan Atom Club, a newsletter for Atom fans,” Noguchi says. “Then they put me in charge of Phoenix when it was serialised in COM magazine, and later I was involved in the publication of Ayako.” Even today, after all these years, Noguchi clearly remembers his first encounter with the God of Manga. “I was told he could sometimes be mean to his staff, but in my case he was kind enough,” he says. “I had just been introduced to some of his editors and assistants when Tezuka came down from upstairs. When he heard that I knew a lot about gekiga, he began to question me: What do you think of Saito Takao? How about Tatsumi Yoshihiro? And Sakurai Shoichi? Yamamori Susumu? He continued like that, rattling off names at such a speed that I could only say ‘I like him,’ or ‘Not him.’ At last he said to me: I think I’ve figured out your tastes. It seems you like hard-boiled stories. When I protested that I simply liked original artists, and Tezuka was by far my favourite, he burst out laughing. Then he added: I look forward to working with you, and climbed back up the stairs.”

Noguchi’s close relationship with Tezuka remained strong even after he left the company to take over his family’s seed and plant business. One day in 1980, Noguchi got a call from Tezuka. The artist said he was thinking about moving both his house and office to Hanno, and asked Noguchi to look for a suitable piece of land. “I was so excited that I began my search right away,” Noguchi says. “I wanted to turn Hanno into a manga town! Eventually I found the right place, next to where the Children’s Library now stands.”

Unfortunately, when Noguchi visited Tezuka’s office to show him the site photos, he was told his former boss had already found another place: following his family’s wishes and staff’s opinion, he was going to move his house to Higashi-Kurume, in Tokyo’s western suburbs, and his studio to Niiza, another small town in Saitama. “I was very disappointed,” Noguchi admits. “I had so many plans, and was really looking forward to living close to Tezuka. In the end, I decided that at the very least I would try to have the statue of Mighty Atom installed in Hanno. So I presented my proposal to the Hanno Junior Chamber – where I served as vice president – as a way to celebrate the Chamber’s 10th anniversary.”

However, Noguchi soon found out that convincing the other members was no easy task. Still, they were left with the problem of finding the money for it. In order to raise the necessary 3 million yen, they decided to hold a manga festival featuring an auction. Artist Hirose Keiji cast the bronze statue in his workshop in Hanno, and made Tezuka very happy when he told him the statue would last for 500 years. Finally, the statue was completed and the unveiling ceremony was held on May 29, 1983, three years after the project began. “Tezuka was so pleased he was smiling all the time,” Noguchi remembers. “He had actually received a lot of offers from different places that wanted to have a Mighty Atom statue, but he turned each one of them down, pointing out there was one in Hanno. That’s enough. That’s why the inscription on the plaque says, ‘The only Atom statue in the world’.” However, Noguchi is quick to point out that the plaque was a later addition to the statue. “To tell the truth, at first, we couldn’t afford to have the plaque made because we’d run out of money. I told Tezuka in the car on the way back after the ceremony, and to my surprise, he held out the envelope with the money he’d received for his lecture at the ceremony. He just said: Please use it for the plaque. I was almost moved to tears.”

So, next time you visit the Encouragement of Climb locations that have made Hanno famous among otaku fans, don’t forget to spare a few minutes for Atom.