In her films, Ogigami Naoko focuses on demonstrating that Japanese society needs to evolve. 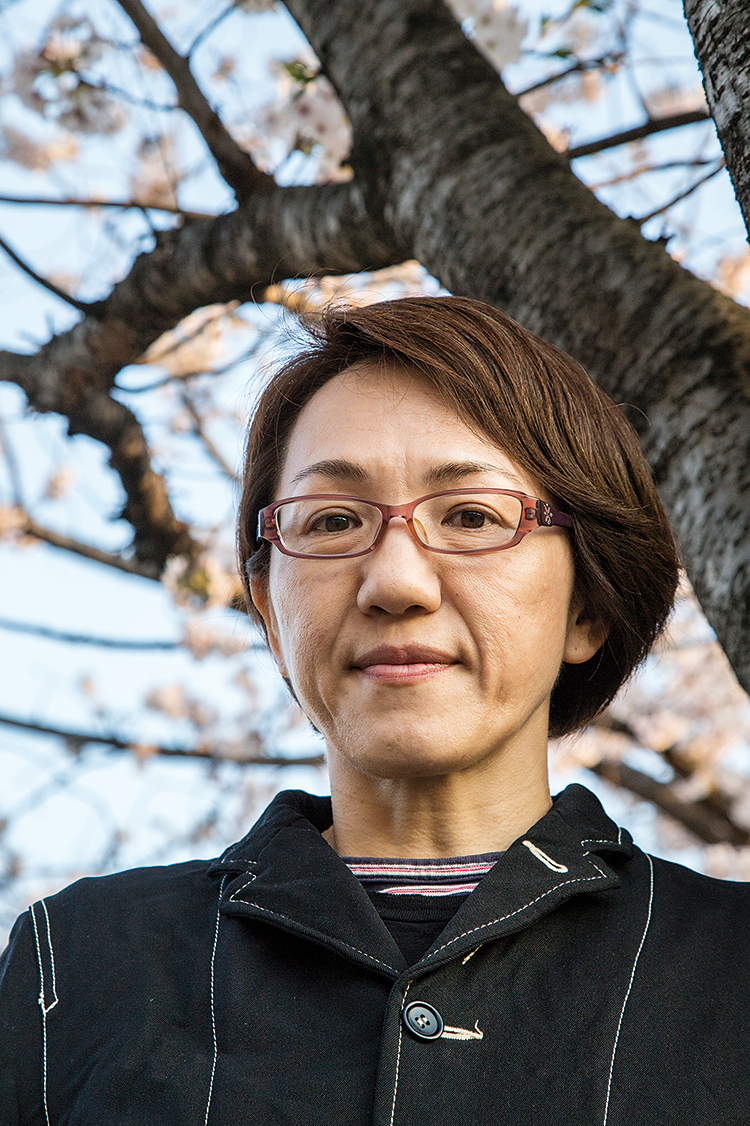 Determined to write her own stories, the director, an admirer of Jim Jarmusch, applied techniques she learned during her long stay in the States in making her films. I’ve heard that when you were younger, you weren’t really interested in films.
OGIGAMINaoko : Let’s say I didn’t know much about cinema. My father took me to a few films when I was a child, that’s all. Even later, when I attended the Image Science course at my university, I mainly studied photography.

But then you decided to continue your studies in America?
O. N. : Yes, while studying in Japan, I realised that I wasn’t all that good as a photographer. That was quite discouraging, so I switched to moving images. I thought that as long as I could work in cinema – maybe as a camera assistant – that would be fine. My main problem at the time was script-writing; I didn’t know the first thing about it so becoming a director was out of the question. And because, at that time, I mainly knew only Hollywood films, I enrolled at the university of Southern California (uSC) in Los Angeles (laughs).

And how did you end up becoming a director?
O. N. : Script-writing was part of the curriculum. I’d never written a story before, and besides, writing a script was – at least for me – a complete puzzle. But I had a really good teacher, and when I finally mastered the art of writing screenplays, I decided I wanted to become a director. It’s funny because now script-writing has become my favourite part in film-making.

Even more than directing?
O. N. : I hate working on set (laughs). All the crew come with their problems and all kinds of questions, and on top of that I’m trying to work with the actors. I’m always under pressure because I have to make so many decisions at the same time, so I become tense and nervous. When I write a screenplay, on the other hand, I’m alone with myself and my story. I just love that feeling.

To be sure, all the films you’ve made so far are based on your original stories. And yet, though you studied for six years in the States, your films don’t really have an American feeling.
O. N. : do you think so? When I lived in the uS, between 1994 and 2000, I was into the indie films they made in new York, and I think I’ve been influenced by directors like Jim Jarmusch. At the same time, it’s true that at uSC I was taught to write scripts according to a standard model (a threeact plot; the main character must have some kind of conflict, etc.), but after my second film, I realised that I wanted to tell my own stories. So I started making open-ended films, because I wanted the audience to think about what came next; I wanted to let them be free to imagine how the story ended, or continued.

Was it hard adapting again to life in Japan? Did you experience any kind of counter-culture shock?
O. N. : Yes, definitely. In America there are other problems, but people don’t really care who you are or what you do. They just let you be. You may dye your hair green or purple, they don’t care. But in Japan you may get flack for dying your hair blond, or even having a lifestyle that’s slightly different. Here, there’s constant pressure to be like everybody else. When I came back I was 27, but I had no money, no job, not even a boyfriend, so I lived with my parents. Having nothing to do, I’d sleep till late in the morning, doing nothing all day. All this didn’t go down well with our neighbours. They made me feel like I was a loser.

Apparently, you even had some problems on set in the beginning.
O. N. : That was when I made my second film, Love Is Five, Seven, Five! (2005). My first film was sponsored by a scholarship I’d won for my short films. The crew was made up of young people who, like me, were working on set for the first time, and everything went well. But my second film was a more mainstream work, and the assistant director was an older guy who probably didn’t like working for a young woman. He was very mean and bullied me the whole time. I later heard the same thing had happened to other people. In part, it’s understandable as, in the past, you didn’t become a director until you’d worked for years as an Ad. My generation was arguably the first for young people to be offered a chance to direct without working their way up the ladder, and I’m sure some veterans had a hard time accepting this.

I heard you’ve been to Finland many times since. What do you like about that country?
O. N. : I like their unhurried lifestyle, and the way they coexist with nature. Even in a big city like Helsinki, you feel nature is important to their lives. Plus, I absolutely love saunas!

After leaving the US, you made films in Japan, Finland, and Canada. How would you compare the way they make films in these countries?
O. N. : First of all, in Japan, people work longer hours on set, probably because there are no unions limiting what and how you do things. Our budgets are also quite small, so we try to squeeze as much as possible into a working day. I must say I don’t like this at all. In other countries, on the contrary, the unions are very strong and dictate the time you can work on set. For example, you can’t work more than twelve hours a day or five days a week. It makes for a more relaxed atmosphere. On the other hand, I had some problems adapting to their working pace. The crew in Finland, in particular, was incredibly slow! They didn’t understand why I was always in a hurry. But I guess in the end, this easygoing atmosphere on the set contributed to making Kamome diner a meditative kind of film. The same thing could be said about Glasses (2007). This film was shot in Japan, but in a tiny southern island called Yoronjima whose inhabitants, again, live a very slow-paced life, very different from Tokyo or Osaka. I’m sure this atmosphere rubbed off on both the cast and the crew.

Between 2006 and 2012 – when you made socalled iyashi-kei eiga (films providing emotional healing) – you worked more or less with the same actors. But in your latest film, Close-Knit (2017), you’ve chosen a completely different cast.
O. N. : I really liked working with Kobayashi Satomi, Ichikawa Mikako, Mitsuishi Ken, and Motai Masako, but I reached a point where I felt I was relying on them too much, and their presence was affecting the kind of stories I was writing. As you pointed out, those films have a similar feel to them. That’s why for Close-Knit I opted to use different actors.

Until Rent-a-Cat (2012) you managed to make almost one film a year, then for five years you didn’t make any films? Were you just busy raising your twins?
O. N. : Raising children has never been a problem. Soon after my daughters were born, for example, I won a scholarship and spent one year in the uS with my whole family. When I returned to Japan, I wanted to get back into film-making as soon as possible, but the producers didn’t like my screenplays. After seeing three of my stories rejected, I almost felt I couldn’t come up with interesting plots anymore, until at last I had a lucky break with Close-Knit. I know that producers only want to make films based on successful novels or manga, but I find that unacceptable. I love to write, and the sole reason I direct is because I want to turn my work into a film. But it’s hard. Actually, at the end of June I was supposed to start shooting my new original story. Everything seemed to be ready, but I was told recently that there were some problems, and everything has been postponed until next year. It was such a shock that I couldn’t sleep for several days. I’m still angry about it.

About 13 years have passed since your debut. Do you think your approach to film-making has changed?
O. N. : More than changed, I’ve gradually got to know my own unique rhythm or pace. Also, most importantly, I think I’ve learned how to use humour in my films; I have a better grasp now of how to make people laugh. As I said, I’d become a little tired of being associated with slow-paced, quirky “healing” stories. In this respect, Close-Knit has been an opportunity to break new ground, and foreign audiences like it. They actually laugh quite a lot, which is great. Ironically, in Japan, they didn’t laugh as much, but people here are very serious to begin with so…

Humour aside, Close-Knit has been quite controversial. It’s the story of a little girl who, neglected by her mother, goes to live with her uncle and his partner, who happens to be a transvestite.
O. N. : unfortunately, this film has not been a box office success in Japan, which makes me sad, not only because, as I said, it’s been a big hit abroad but because it shows that Japanese society is not ready yet for these stories. It’s very hard for sexual minorities to come out of the closet. People love to watch gay and transgender stars on TV, but when it comes to having an LGBTQ neighbour or co-worker, that’s a different story. I’m sorry to say Japan is still lagging behind compared to Western countries.

Several of your films feature characters who are at odds with the social or cultural majority. Is it just a coincidence, or are you particularly interested in tackling such issues?
O. N. : To tell you the truth, I hadn’t noticed this before. Recently, a number of other interviewers have told me the same thing. To be sure, many stories feature an outsider who doesn’t conform to accepted social values. I guess this goes back to the time when I returned from the States and, looking at Japan from the outside in, I couldn’t believe my eyes. I was flabbergasted when I saw how backward and conservative my culture was. I guess I’ve transposed this impression into my films. You could say I’m an outsider myself; I like to do things my way.