You’ll never grow weary of this island of paradise, which is often used as a film setting. 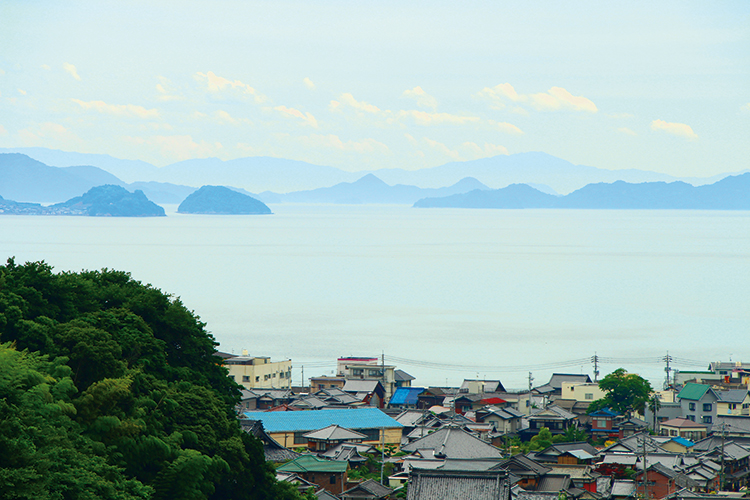 i still experience the same emotion when we come round the mountain and see the little town with its blue roofs and the little islands on the horizon.

Who among us hasn’t dreamed of going to live on an island somewhere? Well, in Japan’s Seto Inland Sea that dream can still come true. The sea is home to a veritable maze of islands – hundreds of them. Some are little more than jagged fingers of rock; others offer a fascinating taste of rural Japan.

Life on these islands moves at a different pace from the mainland. Time itself goes slower, as does the traffic. “I like it here because it’s so quiet,” a former student of mine told me. “At night, all you hear are the crickets. And it’s very safe. We often go out without locking the door.” She was talking about Kurahashi, an island that lies opposite Kure City in Hiroshima Prefecture. Only a 90-metre wide channel known as the Ondo Strait separates the busy city from the beatific island, but every time I cross the bridge it feels like I’m entering another world.

As soon as you’re across the Strait, you sense Island Time taking over. You find yourself in a realm of citrus groves and rice paddies nestled in the folds of mountains. Forests reach down to the seashore. Come evening, so do wild boar. Unmanned roadside fruit stalls tempt you at regular intervals; just help yourself and leave the money in the box. Since the demise of shipbuilding, the production of citrus fruits, especially mikan tangerines, is the island’s main activity.

Kurahashi is the second largest of the Geiyo Islands, the little archipelago in the Western Inland Sea between Hiroshima and Ehime Prefectures. And with an area of 69 square kilometres, it’s over twice the size of nearby Miyajima. In days gone by, the island was famous for shipbuilding. As far back as Emperor Suiko’s reign (554-628), Kurahashi islanders made the ships that carried Japanese envoys to China and elsewhere.

But what keeps my wife Angeles and me coming back to Kurahashi is Katsuragahama beach. We’ve all seen our share of beautiful beaches, right? But this one is historic and sacred too. Katsuragahama Beach lies near the bottom end of Kurahashi. Its beauty was praised back in the 8th century in the Man’yoshu, (Collection of 10,000 Leaves), the oldest known anthology of Japanese poetry, in which an anonymous poet wrote: “If only my life had the grace and countless years of this small pine forest on Nagato Island…” (Nagato is the old name for Kurahashi).

No matter how often we come here, I still feel a tingle of awe every time we drive round the mountain and behold the little blue-roofed town below, with the islands stretching away into the misty distance on the sun-dappled sea. And just as the poem says, there’s still a “small pine forest” between the road and the beach. Legend has it that there are 500 pines. Another poet wrote: “I will devote my life to the pine trees on the shore of Nagato Island. How many generations it took to become such a divine entity, I wonder.” Where the pines merge with the beach, a huge stone torii gateway rises out of the white sands. To those arriving by boat in the olden days, the message was clear: here dwell gods.

For, no matter how bucolic it appears today, in the 8th century Katsuragahama was the stage for a surprising amount of maritime traffic. It was from here that Japanese envoys were dispatched to Shiragi in Korea in 736. This event earned Kurahashi another mention in the Man’yoshu. It’s also the reason why, in 1944, Hiroshima Prefectural Government designated Katsuragahama Beach as a site of Historic Interest.

History aside, the view alone makes it worth the trip. Densely-forested mountains slope down to the sea at either end of Katsuragahama, corralling the beach in an intimate half-moon bay. Out in the dreamy waters of the Inland Sea, the endless islands of Ehime, Hiroshima and Yamaguchi Prefectures come and go in the shifting mist like a flotilla of ghostly galleons. If you come midweek, it’s easy to get yourself a spot in the shade under the pines, loud with the buzzing cicadas.

Kurahashi may no longer build ships, but its strong links to the sea endure. At the far end of the beach, you’ll find the Nagato Museum of Shipbuilding History. In front of it stands a life-size replica of the boat used to transport the Japanese envoy to China during the Tang Dynasty (618-907). It looks like a floating palace, with its bright orange masts and striking design.

Another nod to the island’s maritime heritage lies alongside the road behind the beach. There, three ornate craft are moored in a little wooden boathouse. On the evening of July 17th, these three boats set sail for Miyajima’s Kangensai Festival, towing the Goza-bune- a brightly-lit sacred boat, with musicians on board playing Gagaku court music all the while. This Heianera festival is one of Miyajima’s most important celebrations.

While relaxing on the beach, you’ll probably notice Kashima Bridge in the distance, glinting in the sun, on the southern tip of the island. If, like me, you find Japan’s sea-spanning bridges irresistible, then take a detour down there before leaving Kurahashi. You’ll scarcely see another car on the way down, but drive slowly – village elders are wont to drag their chairs out into the road to while away the evening chatting in the pleasant breeze.

At dusk, the lights of the deserted Kashima Bridge shimmer on the water like fireworks in the black night. Across the bridge lies tiny Kashima Island. You might just come across a young couple fishing from the concrete jetty, but otherwise the village seems empty. The only sound is the gentle squeaking of polystyrene mooring buoys rubbing against the wooden hulls of the fishing boats packed into the small harbour.

Then you can tell the folks back home what it’s like to visit such an overcrowded country.

FROM TOKYO STATION, take the shinkansen to Hiroshima. From there, on the Kure line, the journey to Kure Station takes around thirty minutes. you’ll find the the Kure-Kurarahashi bus at the front of the station, platform 3. get off at Katsuragahama-Onsen-kan.