Fewer than 100 km from the centre of the capital, this region has everything to satisfy all your senses. 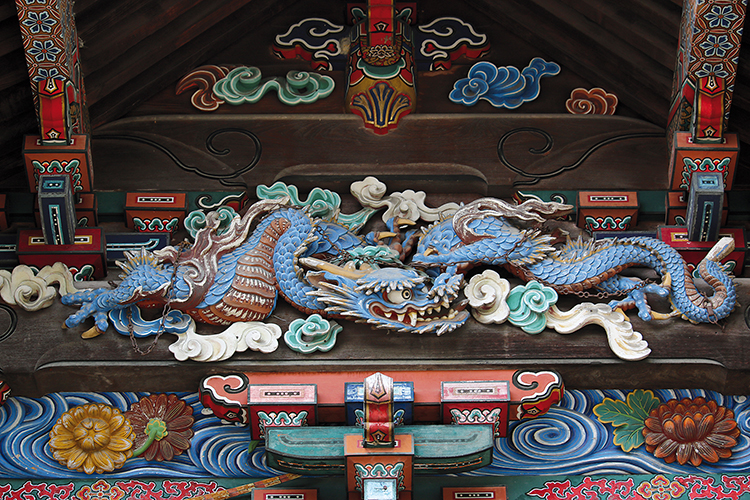 The colourful decorations of the Chichibu-jinja Shrine resemble those of the Nikko Shrine in many respects.

The city of Tokyo is known for its dynamism, but also for the accompanying stress and tension suffered by this vast conglomeration of 30 million inhabitants. The question is how to combat the weariness of just even one of its visitors, many of whom complain of the lack of green spaces and the absence of the peace and calm they can offer.

The inhabitants agree with these comments, and though they’re certainly more used to the constant turmoil of their city, they’re not past saying with a sigh: “There are just too many people”.

However, unlike the tourists, they know that surrounding the capital there are places where you can spend a pleasant weekend. Mount Takao, a starred entry in the Michelin Green Guide, is one example. But if you’re looking for somewhere peaceful, perhaps it’s no longer a good idea. With more than 2.5 million visitors a year, there’s a strong chance that you’ll come across the same crowds of people you met in Tokyo. What about Kamakura? Alas, you risk the same thing happening in the ancient capital, especially in summer when it’s overflowing with surfers and people walking by the sea.

If you’re searching for a peaceful destination surrounded by nature, with a wealth of history and local culture and close to the Japanese capital, travel in a north-westerly direction from Shinjuku station to get to Chichibu, about 80 km away. It’s very mountainous – the highest summit in the region, Kobushigatake, reaches a height of 2,475 metres. Historically, it marked the border between the regions of Musashi and Kai (present-day Tokyo and Yamanashi Prefectures). Traditionally known for its silk production, which afforded its local farmers some financial stability during winter months, the region even exported its textiles as far as Europe towards the end of the 19th century. However, due to competition from synthetic fibres, the silk industry, which had been a pillar of the Japanese economy at the time, experienced a fatal decline during the following century. You can get an idea of the region’s glorious past when visiting the Chichibu Meisen Kan, a museum devoted to local traditional kimono, which were especially popular in the Taisho era (1912-26).

The region attracts many tourists, above all in autumn, when it offers numerous spectacular views of blood red maples and golden leaved ginkgo trees. The nagatoro Gorge is one such place. Bathed in the low light of november, a small wooden boat glides gently through the waters of the Arakawa River. The dozen or so passengers look around with amazement at the life-sized autumnal watercolour laid out before them. There’s hardly a breath of wind, but the movement of the boat makes the reflections on the water sparkle gently. The surrounding silence is barely disturbed by the ducks on their endless search for algae. For centuries, this stretch of water has shaped and moulded this unique landscape, famous for its rock formations. The Japanese call them iwa datami (tatami rocks) in reference to their structure resembling the layers of a vanilla slice. According to legend, pilgrims of old who came to the Hodosan Shinto Shrine held banquets on the rocks by the light of the moon.

In fact, the region has many Shinto shrines like Hodosan, but, without doubt, the best known is Chichibu-jinja, which has been in existence since at least the 9th century. True connoisseurs of Japanese architecture will discover it bears some resemblance to the famous nikko Shrine, especially with its brightly coloured facade decorated with animal sculptures. That’s not surprising as several of the sculptures are by Hidari Jingoro, the legendary 17th century sculptor who created the nikko Shrine’s world-famous three wise monkeys.

This sacred place is best known for its night festival, Chichibu Yomatsuri, which takes place each year on december 2nd and 3rd. It’s a special event for the local inhabitants, who wait for it impatiently for months. “We live for that day”, they say jokingly in the region. On this extraordinary day, the city of Chichibu overflows with food stalls and tourists from, among whom you can see men in traditional costume pulling enormous carts around ten metres high and weighing several tons. This great event culminates with more than 7,000 fireworks, which light up the crowds and the carts at the same time the latter arrive in front of the town hall. This festival attracted almost 400,000 visitors in 2016, the same year it was listed as a unESCO Intangible Cultural Heritage. In 2016, in order to better promote the region’s wealth of resources, the local railway company, Seibu Tetsudo, launched a luxury train named “52 Seats of Happiness”, fitted out by the famous architect, Kuma Kengo. It runs bet- TRaVel ween Ikebukuro station, in the north of Tokyo, and Chichibu station. In the restaurant-car, well known cooks from the region prepare high-quality food using local produce. True to the country’s culinary tradition, the chefs change the menus four times a year with the seasons. The railway company, which was 100 years old in 2015, took great care to use local craftspeople to create the interior decor – lampshades in washi (handmade paper), wooden ceilings, silk curtains to separate the carriages – without not forgetting to install a replica Chichibu Yomatsuri cart, the region’s most important symbol.

As this is the only train of its kind you can catch from Tokyo city centre, obtaining a reservation can prove difficult, but you can try your luck by visiting Seibu Tetsudo’s website, also available in English (www.seiburailway.jp/railways/seibu52- shifuku/common/img/home/howto_eng.pdf). The cost is 10,000 yen (£ 65) for the noon train, and 15,000 yen (£ 96) for the evening train. Since its launch, the train has attracted not only die-hard travellers but also connoisseurs of alcoholic drinks, which is quite understandable when you take a look at the menu with its list of sake, wine, whisky, and other regional products from Chichibu. What really encourages passengers to become tipsy is a brand of whisky called Venture Whisky, a local start-up created in 2007. “Chichbu’s climate – very hot summers and very cold winters – accelerates the maturing process,” says Tabata Soma, one of the distillery’s fifteen employees, who also mentions the water quality in the region, which is essential in the production of this quite divine beverage.

All the distilling equipment was imported from Scotland, but they use barrels made of Japanese Mizunara oak from Hokkaido. Already crowned with glory by winning prestigious international prizes such as the World Whiskies Award, it has become somewhat difficult to track down bottles of their whisky. “We only produce 90,000 litres of whisky a year, which is what a large Scottish distillery produces every two or three days,” confides Tabata Soma. Alas, it’s not possible to buy a bottle from the distillery, so we’re advised to visit the local bars to get a taste of their whisky. In addition, since 2016, they’ve been collaborating with farmers in the region to distil whisky from barley grown in Chichibu. “We’ve just tasted the new pot (very young, newly distilled whisky). It had a very rich and complex flavour,” explained Tabata Soma, though there’s no knowing how the taste will develop. “We’ll have to wait at least three years to see the first results,” he continues, his eyes shining with impatience.