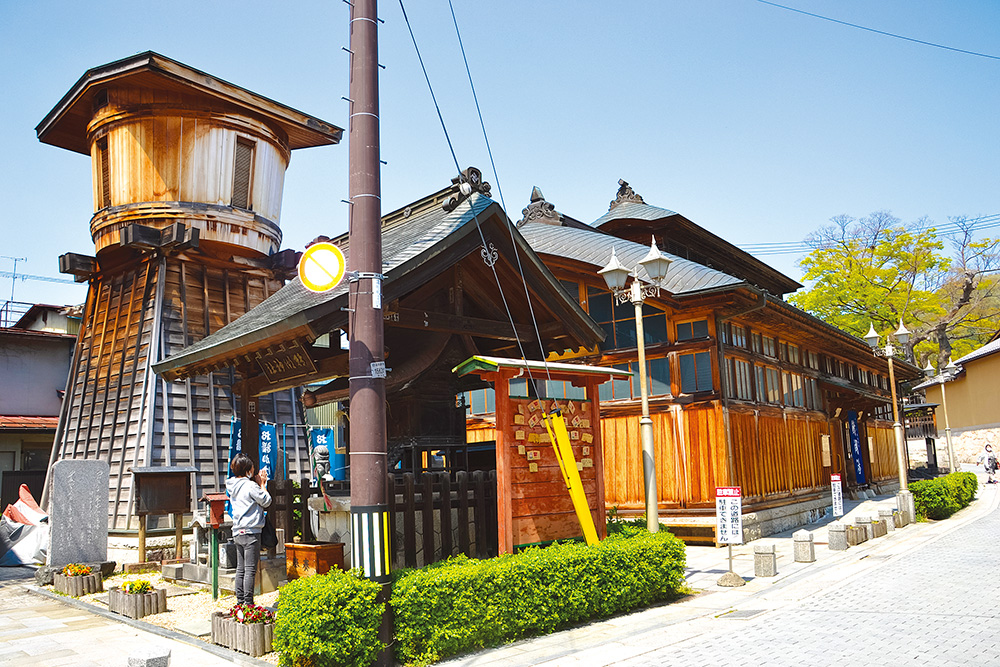 Nestling in the mountains in the north-east of Fukushima Prefecture, Iizaka Onsen is a delightful spa town I discovered while obtaining my driving licence. In fact, you’ll find driving schools in the most beautiful places in Japan, offering fast-track training courses with full-board accommodation in traditional hostels or hotels. An ideal way of spending a couple of weeks in unusual places while combining business and pleasure. Situated to the north of Fukushima, 250 kilo meters from Tokyo, you can reach Iizaka Onsen via the small Iizaka train line in 20 minutes. As soon as you arrive, you’re struck by the provincial charm of this village, built along a river surrounded by high mountains. The pretty wooden station hosts a weekly market selling seasonal fruit and vegetables. In the main square, there’s an imposing statue of Matsuo Basho recalling the fact that the famous poet, who travelled through this region in the 17th century with his pilgrim’s staff, stayed in this famous spa. His journey is described in the travel diary Oku no Hosomichi (The Narrow Road to the Deep North – various versions available in English translation). Opposite, several beautiful wooden buildings, including the tourist office, overlook a narrow street that seems to have emerged from another age. I also spot a curious monument like a pyramid-shaped stele with an egg on top, but I have no time to read the inscription as my course at the Matsuki driving school is due to start immediately with 7 hours of lessons.

In the classroom, we are firstly reminded of the complex system for obtaining a Japanese driving licence. At the end of the first week, you must pass an initial exam on the highway code as well as a driving test, then at the end of the second week, another driving test followed by a final test on the highway code at the police headquarters where you live. It’s not easy to memorise all this information while trying to adapt to the many demands of the school. But when the day ends with a driving lesson in the middle of a beautiful peach blossom orchard, you know you’ve made the right choice. The location is absolutely stunning, with the vivid pink trees and the sun setting behind snow covered Mount Azuma. I decide to walk back along the side roads bordering the Surikami river, lined with small houses and vegetable gardens. Large storks fly over the perfectly calm countryside, which is fragrant with the scent of spring. 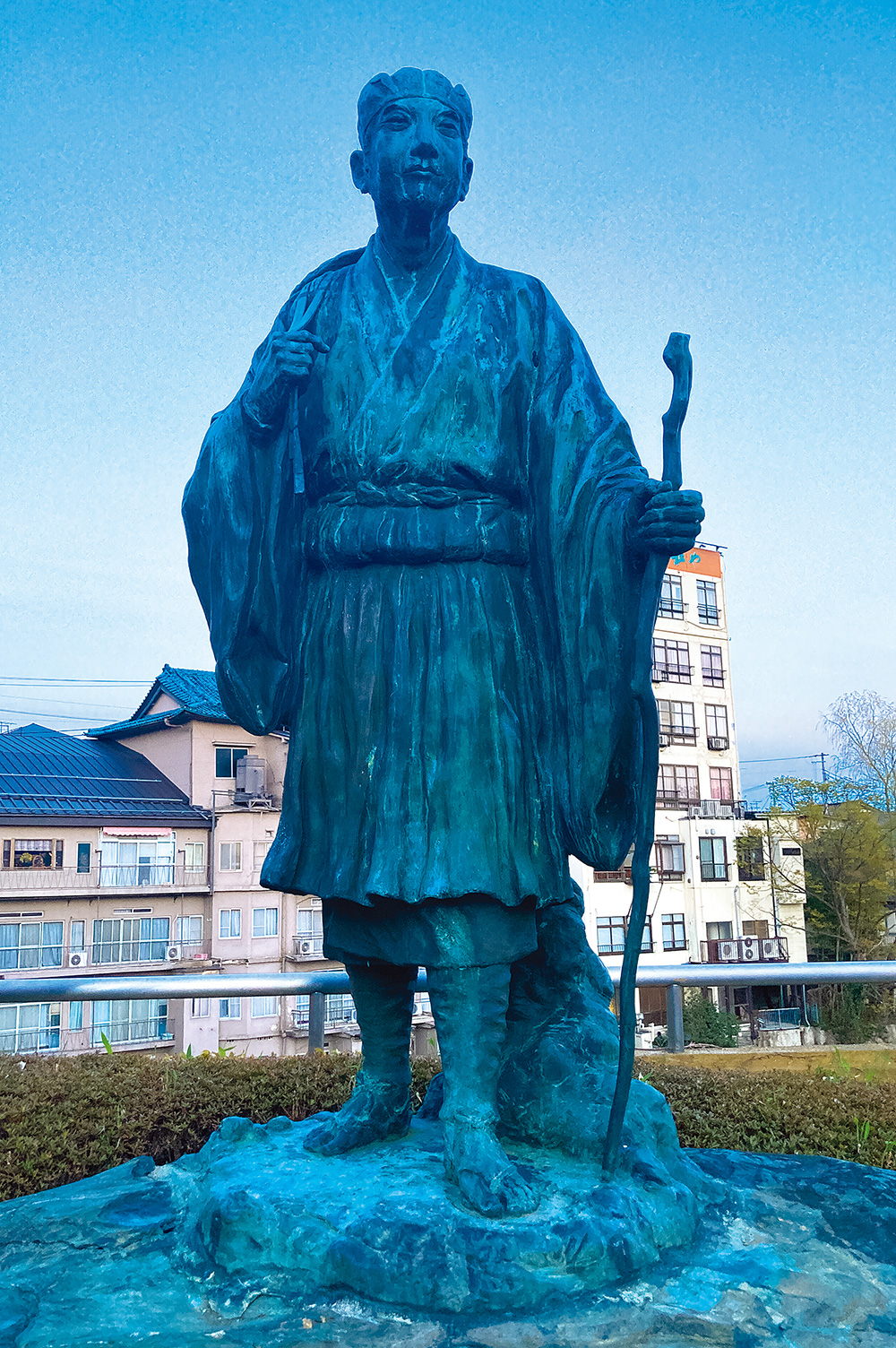 Among the illustrious visitors to the small spa town was the famous poet Matsuo Basho.

An old stone stairway leads me to the Totsuna suspension bridge, the oldest steel arch bridge in Japan, built in 1915, which offers a breathtaking view over the city. Reflected in its green waters, old buildings from the Showa period (1925-1989) face Edo style baths (1603-1868) including the famous Hakoyu. Built 1,200 years ago, the Hakoyu spa and its emblematic drum-shaped tower has been rebuilt in its original form and includes two large pools. With nine community baths, Iizaka Onsen used to welcome travellers arriving after long days of walking, but did not offer accommodation. Now, the city is full of numerous onsen ryokan, or “thermal inns”, built alongside the river. Mine is called Tsutaya. Situated opposite the station, it is four storeys high and has large tatami rooms, some facing a small Japanese garden. In the restaurant on the second floor, my hostess introduces me to a table of six driving licence applicants. Despite the health crisis, the resort’s hotels are making ends meet thanks to the pupils at the Matsuki driving school, she tells us. Very badly damaged by the nuclear accident at the Fukushima Daiichi plant in March 2011, the Fukushima region is struggling to attract visitors: the radioactive cloud following the three reactor explosions also contaminated areas more than 50 kilometers away. But my young companions, aged between 18 and 23, do not appear to be worried about it. One of them chose Iizaka Onsen as it was closest to where he lived, another because he had never been to Fukushima. As for me, I still took a Geiger counter to check whether there were any hotspots or radioactive spikes. Luckily, Iizaka Onsen and its surroundings don’t ap pear to be affected. At last the meal was served with a multitude of small dishes: spinach sprinkled with katsuobushi (dried skip-jack tuna), soup with fish dumplings, grilled salmon. Our hostess came back to ask us about our schedules. We’re nine days away from our first test. If we fail, we have to pay for every subsequent night we stay; the reason that everyone hurries back to their room to revise the highway code. Fortunately, there is the bath to calm our over worked brains. The bath at the Tsutaya inn is a kakenagashi, whose water is sourced directly from the ground.

Over the next few days, I walk around the town and notice several signs advertising rajiumu tamago, which means radium eggs! They’ve been an Iizaka Onsen speciality for almost a century. In a shop called Abetome, I find a multitude of eggs wrapped in coloured paper: very distinctive packaging. “Abetome is an institution that dates back to 1878 and invented radium eggs in the 1930s. It has become the symbol of Iizaka and we are proud of that!” states Mr Abe who has taken over the family firm. With their unique creamy texture, “radium eggs” were originally slow-cooked in radium thermal waters, from whence came their curious name. As the egg monument in the station square reminds us, Iizaka was the first place in Japan where radium was discovered in 1904, 6 years after Marie Curie. Iizaka’s fame stems from its radioactive thermal waters, a property which, some fifty years ago, was much sought after in Europe and Japan. However, nowadays radium is no longer fashionable. So much the better for Iizaka Onsen because its waters have lost almost all of their radium content. Only the rajiumu tamago remains, which has become a staple for all the souvenir shops in the region. Cooked in the hot springs at 70°C, this soft egg is eaten on rice like the onsen tamago (egg cooked in the hot water of the thermal springs), of which the Japanese are so fond. 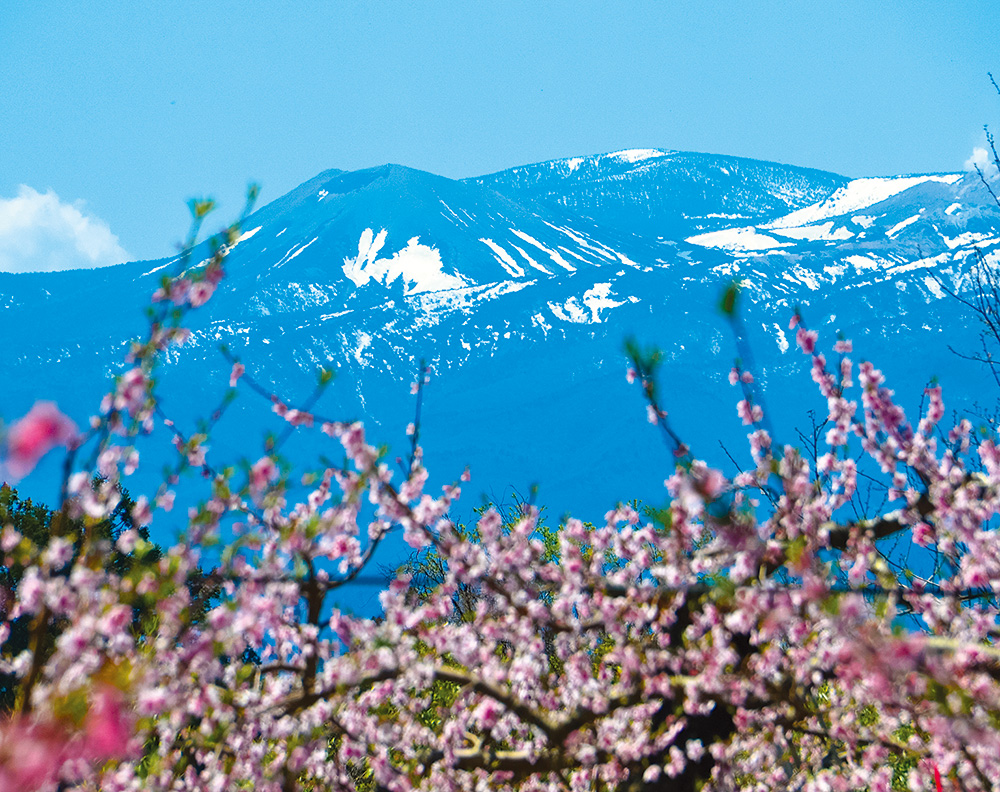 When the snow draws the outline of a rabbit on Mount Azuma, it’s the start of the sowing season.

Opposite Abatome is the small Matsubokkuri cafe, which offers another local speciality: eating cake while having a foot bath! A large pool occupies a room in a modern setting with black walls and large windows looking out on nature. The water temperature of the hot spring is 40°C. The owner invites me to take off my shoes to plunge my feet into the scalding hot water she has previously cooled down. Sitting on the edge, I eat a well-known brand of cheese cake and a cup of coffee while revising my highway code with my feet in the water. A unique experience.

After passing the first test, we finally have the pleasure of leaving the driving school circuit to take to the open road. We travel alongside rivers, drive over bridges and through orchards, pass by shrines. And always with the breathtaking view of majestic Mount Azuma where the snow has drawn the outline of a white rabbit. When the rabbit appears it’s sowing season, say the farmers. The peach trees have turned green and spring is coming to an end. I celebrate the end of the course by relaxing in Sabakoyu, the oldest (1689) and most imposing of Iizaka’s public baths. You reach it via Yuzawa Street, which runs up towards the hills.

A journey through time travelling from shops of the Showa era selling mochi rice noodles, past restaurants offering the local speciality enban gyoza, crispy fried Chinese dumplings, and the houses of rich merchants of the Edo era like Kyu Horikiri-tei with its dozo (mud walled) warehouses, and its flower gardens you can admire while taking a hand and foot bath… Adjacent to Sabakoyu is a historic monument from the Edo era, a small Shinto shrine restored in 1993 where you can go to pray for good health. Inside, this cypress wood struc-ture is several metres high and overlooks two pools – one for men and one for women – and old fashioned changing rooms, without partitions, which open directly onto the bath. To the side, two charming ladies are chatting while rubbing their backs with towels. On the other side of the partition, you can hear men laughing as they energetically splash each other. A ray of sunlight shines through the ceiling windows, filling the place with sensual calm. With smooth skin and feeling rested, there’s nothing left for me to do except to walk down Yuzawa Street with my geta (wooden sandals) tapping on the stone stairs while I hum Chanko chanko, the ballad of Iizaka