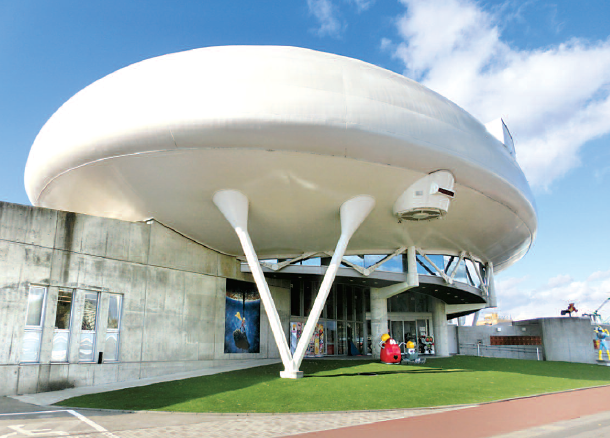 Badly damaged by the tsunami in March 2011, the city has high hopes with its manga museum.

I f one has heard the name Ishinomaki, it’s probably because of the earthquake of Spring 2011. Last March Prince William came on an official visit to the city. It gave encouragement and hope to the inhabitants, especially as the city is in the process of being rebuilt and its citizens are trying to lead a ‘normal’ life once again (See Zoom Japan no. 29). To achieve this courage and hope are essential. Recent plans for the development of the city harbour centred on manga as their main theme, and one is made aware of this on every street corner. The need for courage and hope gave birth to the first super-heroes across the archipelago after World War Two, and the same motivation is visible today in Ishinomaki city. The project originated in 1995 when the town council turned to Ishinomori Shotaro, who was pursuing his career in Tokyo as an influential mangaka but who had grown up and spent his teens in a town close to Ishinomaki. The council was worried about the movement of people out of the city into the suburbs with the rise of out-of-town shopping centres, to the point that the city centre became known as the “closed-shutter district”. The famous comic artist joined forces with the city to support the transformation of a strip of land in the Kyu-Kitakami river into a “mangaisland” with the aim of building a museum that would become the new heart of the city. This was the first city renewal project in the country to be based around manga. The venture encountered some challenges.

At the time comics were considered to be a bad influence on children, and had not yet found a positive role to play in society. Without the support of a population that disliked manga the city council was unable to release the necessary funds, and the project was yet further delayed with the death of Ishinomori himself in 1998. Nevertheless, around a thousand citizens did not give up hope. They organized meetings and public action in support of the project, and within 3 years, the movement had been endorsed by 2,500 people across the country, including famous mangaka such as Satonaka Machiko, Monkey Punch, Yaguchi Takao and even Chiba Tetsuya. Additionally, the graphic artist Hara Takao, one of Ishimori’s closest friends, took time to act as coordinator between Ishimori Productions, the company representing the late mangaka’s interests, and the future museum. He even ended up moving to Ishinomaki in order to fulfil the wishes of his friend. Thanks to their efforts the museum was completed in 2011, with the help of funding from the local council covering 50% of the cost. The council entrusted the management of the museum to representatives of the local population who had been instrumental in supporting the process. A company called Machizukuri Manbo was set up, whose name literally means “the moon-fish creator of the city”. “We call it a company, but its members are shop keepers and volunteers. However, I believe we would be more efficient if we were managed by a public-private partnership. Our day to day experience makes this quite clear” explains Kimura Hitoshi, the general director of the museum. Built in the heart of Ishinomaki city and designed by Ishinomari Shotaro himself, the Mangattan Museum is now considered iconic. With its astonishing architectural form resembling a flying saucer, the museum plays a uniting role that perfectly illustrates its importance. Its name was inspired by Mangattan Island- the strip of land on which it was built and whose shape it resembles. The two-storey museum brings the work of the artist to life with numerous installations. It all starts at Sendai railway station before you even reach Ishinomaki, where most people get off after travelling from Tokyo on the Shinkansen. People wait to board trains that are decorated with heroes created by Ishinomori, and on arrival in Ishinomaki statues of the characters from Cyborg 009 welcome travellers.

The city itself is also full of characters conjured up by the great master and you’ll notice them everywhere as you stroll around! When you reach the museum you’ll meet Robocon and Professor Gantsu on the lawn, before discovering statues of Sea Jetter Kaito, Ishinomaki’s new hero, first conceived by the Ishinomori himself but fleshed out by his successor Hayase Masato. You’ll want to touch the fifty-odd handprints of famous manga artists that are etched into the wall that leads to the main entrance. At the end you can even shake Ishinomori’s hand. On entering the museum you’ll be warmly welcomed by the museum team dressed up as characters from Cyborg 009. Before checking out the bokuju itteki shop, whose name comes from a manga created by the artist and his friends back in his junior high school years, you are led up a corridor displaying his intriguing life story. Further on there is a projection room showing short movies by Ryujinnuma, or other original creations by Mangattan such as Sea Jetter Kaito. To reach the first floor you now have two options. You can follow the corridor lined with flying-saucer shaped windows and admire Ishinomori’s original drawings along the way, or take the lift for a big surprise! No spoilers — you need to see for yourself. The first floor is captivating, as one section is dedicated to temporary exhibitions that are renewed four times a year. For each season there’s a new creative project on display, involving different well known comic artists, and the theme is different every time. It’s just as likely that regional food specialities will be showcased as the collaboration between Kamen Rider and Ultraman, or maybe the work of an American artist who has worked for Disney Studios. Another section is dedicated to the world of characters imagined by Ishinomori, starting with Cyborg 009- a world with universal appeal that will make adults feel nostalgic and children dream. Further on a unique room gathers together all the different generations of Kamen Rider. Then it’s the turn of the world of jidai-geki: Kikaider, Sarutobi Ecchan and Hotel, all presented in different ways. You’re advised to plan for enough time to check out all the details. The second floor hosts a multimedia library, an education room and a cafeteria. You are free to read or look at the manga and anime available, but that’s not all.

You can also have some fun together, or breathe life into your sketches in the “Anime ni shiyo” (Let’s make our own anime) studio too. While in the library don’t miss out on an amazing collection of signed dedications donated by an impressive number of mangaka. Written on shikishi (cardboard paper, often in the shape of a square, for writing messages), they were sent to the Mangattan museum when it was opened in 2001, and then again in 2012 when it reopened after the March 2011 earthquake. When your visit draws to a close consider buying some souvenirs from the shop located on the ground floor. Your contribution will help the Mangattan Museum continue its work and bring smiles to the people of Ishinomaki, who need all the support they can get.