Film director Aoyama Shinji agreed to give us an exclusive interview about his vision for contemporary Japanese cinema. 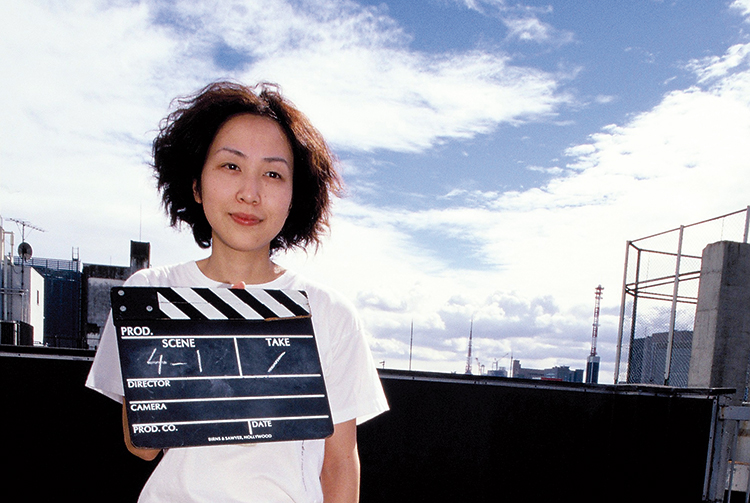 On the roof of Eigabi gakko (Film School of Tokyo), where the great names of cinema – Kurosawa Kiyoshi, Aoyama Shinji and Kore-Eda Hirokazu – all teach.

It’s been quite a time since I’ve watched any Japanese films, apart from those made by Kurosawa Kiyoshi and Kitano Takeshi, for the very good reason that I’m not interested in them. When I do decide to see a film that everybody is talking about, I usually leave very disappointed, and it’s often nothing to do with the nationality of the film per se. Apart from American films, I’m not really attracted to unknown directors. I only go to see new work by film makers I already know. Am I only drawn to certain directors? Am I already just living in the past? Very probably. Some years ago, I was a jury member at different festivals around the world. Most of the films I watched adopted a similar narrative technique (flashbacks), lacked visual power and the dialogue was bland. It was too much for me. I started to wonder whether they weren’t just films made by students in order to get their diplomas. There was no evidence of the freedom and power that should be the hallmark of these first-time film makers. Whatever happened to the spirit of the new Wave? This observation is also undoubtedly true about Japanese cinema. despite that, or even perhaps because of that, I agreed to teach at university level. I felt I’d been given the task of freeing cinema from this state of stagnation. Luckily, some of my students also shared an aversion to this feeling of déjà-vu. unfortunately, I had to stop teaching after 5 years due to ill health. now, my only pleasure will be in watching what these students achieve in the future. It goes without saying that their career paths will be filled with pitfalls. There are numerous obstacles to clear and conditions to fulfil to create a film in today’s film industry. Here are some of them:

1. Have a best-seller to base your script on.
2. use simple language that the audience can understand.
3. Make no attempts at originality.
4. use well-known actors.

If you don’t fulfil these criteria, it’s almost impossible to even think about realising a project. And for an independent film, you have to add the need to:

Under these conditions, you have to ask yourself whether a young film-maker will ever be in a position to undertake a project. I really don’t think so. When I have time, I sometimes watch recent films on television. I force myself to watch them right until the end, but it’s sheer hellish torture. There’s no innovation or sense of freedom to be found, only adolescence or disguised cruelty.

Only a Kurosawa Kiyoshi or a Kitano Takeshi are able to overcome the obstacles listed above. Conditions 1 and 3 don’t apply to them as originality is part and parcel of their work. A film is all about money, an investment. On this matter, one of the ground rules is avoid taking risks at all costs. But film production itself is a gamble. It’s like throwing dice. Either you win or you lose. But, today, young filmmakers hardly get a chance to try. Even if you’re not Kurosawa or Kitano, this obstacle can be overcome by some experienced film directors, but it’s a real stumbling block for younger film-makers. So they’re forced to present their films at international festivals without having had the opportunity to improve their technique, often with disappointing results. It’s such a pity. So why do producers recruit young directors? It’s simple. They cost less. They’re easily manipulated. And if it doesn’t work out, they find of another.

Last year, the gifted film-director Hori Tei’ichi died. He was barely 48 years old. He began his career making pinku eiga (pink films), films of an erotic nature. After making several films of this kind as well as other original work, he decided to take a step back. After an absence of six years, he released a new film last year entitled natsu no musumetachi: Himegoto (Girls in summer: their secrets). He disappeared from view while his feature film was being screened in cinemas. It’s very sad. In the end, the six years he disappeared off the radar weren’t fruitless. He left us an astonishing and unique work, a series called Tenryu-ku (Tenryu Ward). They’re documentaries, one of which was shown after his death, at the Yamagata International documentary Film Festival. It was a great success. Hori Tei’ichi, accompanied by just one assistant, had visited the high mountain tea plantations and carried the camera himself while filming. It was as though he had reinvented film. We haven’t seen this kind of approach since the era of the silent films. After shooting the film, he devoted himself to writing a filmscript over a period of four years. With no budget, but in total freedom, he directed and produced the wonderful natsu no musumetachi: Himegoto. I don’t consider him to be just a skilled technician. Hori Tei’ichi is a true genius who knew how to make films that were fresh and uninhibited. I am absolutely convinced that these films represent “present-day Japanese cinema”.

Last year, a film-maker of the same age, Mishima Yukiko, released Osanago warera ni umare (dear Etranger). Her name is similar to Mishima Yukio’s, and though her style is quite unlike that of the famous writer, like him, her standards are high. Like my film Tomogui (The Backwater, 2013), her feature film is based on a script written 20 years ago by Arai Haruhiko, a writer representative of modern Japan. It took a long time to make, but it presents us with an extraordinary performance by Asano Tadanobu, one of our best contemporary actors. The other actors are all equally amazing. nowadays, it’s unusual to come across such a bighearted production. The director creates a genuine connection not only with Asano’s character but also with all the other characters. It’s this kind of profound human rapport that she establishes between the actors that could save Japanese cinema today. Her experience permeates the whole of the film and is clearly visible on screen. It goes without saying that cinema requires very large sums of money, and to be profitable it needs audiences. But who are they? Who’s capable of profiling them? nobody. So all you can do is guess. But the time when a film opened in the cinema and its profitability was calculated the following week is a thing of the past. However, it’s only by continuing to screen films that cinema has any chance of revival. If this reality is not taken seriously, we can only fear that Japanese cinema is approaching its demise.