Committed to producing cheese, YOshidAZensaku imparts his knowledge and skill in Nepal and Bhutan. 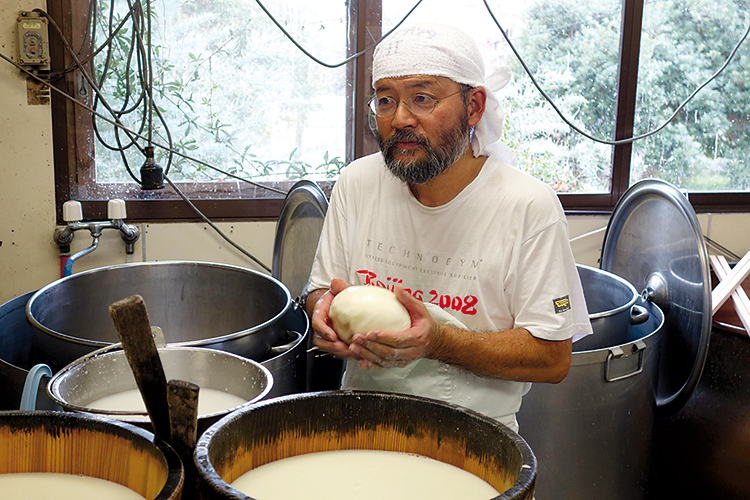 Afarmer who travels to Nepal and Bhutan to teach cheese-making techniques is a great subject for an article. But it’s just a case of a simple humanitarian act. Yoshida,who manages Yoshida Farm with the help of his family, is a man who loves the idea of “exchange”, even when he’s at home in Japan in the mountains of Okayama. He’s one of the first to produce caciocavallo, an Italian cheese, but also one of that rare breed of “true farmers” who raises his own Brown Swiss cattle, using the most natural methods possible. He’s also a skilled “manual labourer” who built his home, bread oven and even his cheese cellar with his own hands, while his wife Chifumi took care of their vegetable garden and their son Genya was busy with the production of French cheese. Restaurant chefs visit him regularly in order to buy his dairy products to use in their creations.

But he’s also a man with an anthropological outlook, travelling the world to research crop and livestock systems, and means of dairy production. So it’s quite natural that his connections with cattle farmers from far and wide eventually led him to Nepal. His first visit was in 1998, to the village of Lenten, to explain how to make caciocavallo, then again in 2015, after the village was destroyed following an earthquake and avalanche. He suggested the formation of a union in order to confront the threat to their livelihoods together and to produce cheese to sell to mountaineers, and thus maintain their culture of raising crops and cattle. He first went to Bhutan in search of a cheese that had been written about, but had never been seen by any Japanese researcher. Yoshida Zensaku had to climb to a height of more than 4,000 metres to track it down.

After years learning to make local cheeses and frequent journeys here and there, the grandmother of the King of Bhutan, who had founded an organisation to help rehabilitate unemployed young people, asked him to teach not only the youngsters how to make cheese but also the head chef to the King of Bhutan! In answer to the question whether it might not be somewhat difficult to teach a beginner how to make cheese, he replies, “Cheese-making is not difficult, but raising cows is far more so; all products depend on good raw materials. In the case of Nepal, the herdsmen know a great deal about the milk from their dzomo (a cross between a yak and a cow). In addition, their cheese is smoked naturally indoors, which transforms it into scarmozza (smoked caciocavallo). It tastes wonderful! Caciocavallo is one of the oldest cheeses historically speaking, and all you need to make it is a cooking pot. I learned more from them than they did from me. I went there with what I knew about, my knowledge of cheese, and they taught me their approach to life and their way of thinking”, he adds.

If cheese-making is passing on a thought, then teaching someone how to make it could be a kind of dialogue. Next year, Yoshida Zensaku is returning to Bhutan to continue this dialogue about the making of “locally produced caciocavallo”.