This green lung in the Tokyo region is ideal for those who love walking and unusual discoveries. 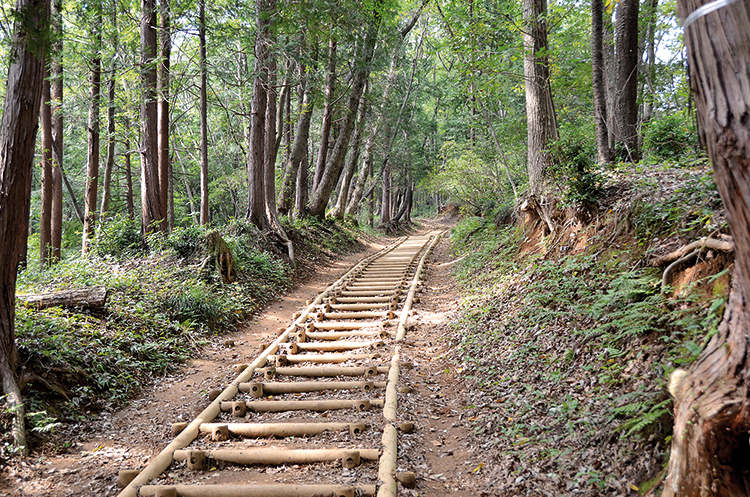 The Greater Tokyo area has no shortage of beautiful trekking and hiking trails, starting with Mount Takao in the capital’s western suburbs and, of course, the mighty Mount Fuji, which is only two hours and a half away from central Tokyo. Less known, but equally worth a trip, is Hanno City in Saitama Prefecture, a mere 40-minute train ride from Ikebukuro.

In the past, this relatively small city (as of 2016, it had a population of about 80,000) was mainly known for supplying Tokyo (then called Edo) with timber, and even today, the whole area is surrounded by heavily-forested mountains (the city’s symbol is the Japanese sugi pine or red-cedar). When it comes to hiking and outdoor activities, Hanno may actually be one of the Kanto region’s best kept secrets. That is, unless you are an animation fan: in that case, you probably already know it, as this place has strong links with contemporary anime, the Moomin world, and even the God of Manga himself – Tezuka Osamu. (See Zoom Japan NO.55, February 2018).

The area’s latest renaissance, so to speak, began in 2011 when the Encouragement of Climb manga began serialisation in a comic magazine, and gathered steam when the first season of the anime version was aired on TV in 2013. As the title suggests, this story is about mountaineering and many of the characters’ adventures are set in and around Hanno.

I first visited the city to see for myself why artist Shiro had chosen this little known area as a location, and was surprised by the variety of hiking opportunities Hanno offered.

The closest trails can be reached on foot from Hanno station. The neighbourhood around the station is not particularly memorable. The Ginza shopping street, in particular, has nothing to do with the world-famous district in Tokyo. When I was there, most of the shops were actually closed. The few that were open sported some sort of decoration from the anime. The overall atmosphere was one of decay and abandonment – which is not necessarily a bad thing, especially if you are into rusty billboards, corrugated iron-covered houses and sun-bleached photographs and posters. It gives the street a certain retro feeling.

Things become even more fascinating when we leave Ginza Street and head toward our destination. The first place we reach is Kannonji, a fine example of a Buddhist temple belonging to the Chisan sect of Shingon Buddhism. Its claim to “fame,” oddly enough, is the statue of a white elephant that takes pride of place where the temple bell used to be. Apparently, during the Pacific War, when resource-depleted Japan needed all the scrap iron it could find, the priest had to give the bell away to “contribute” to the war effort. In the 1960s the bell was replaced by the elephant – a donation from a local shop owner – and has recently appeared in several episodes of Encouragement of Climb, thus attracting a new generation of pilgrims who like to write their wishes and prayers on the colourful ema (votive tablets) they buy from the temple itself.

As we get closer to the mountains, we arrive at Chuo Koen (Central Park). Though younger anime fans only know it thanks to Encouragement of Climb, this place has much older and stronger links to Japanese animation. In fact, if we stray a little from our goal and wander around the park we find the statue of Tetsuwan Atomu (Astro Boy),Tezuka Osamu’s most popular character. It’s the only existing Atom statue in the world and is a testimony to the artist’s deep connection with the city. The big temple across the street from Central Park is called Noninji and belongs to the Soto school of Zen Buddhism. In the Edo period (1603-1867), this temple was favoured by the shogun and had twenty subsidiary temples in the Hanno region. However, it later fell on hard times, culminating when it was burned down in the Battle of Hanno. The garden, in particular, is worth the 300 yen entrance fee. It was created in the Momoyama period (1573-1603) and has been selected as one of Japan’s best 100 gardens.

The real fun, however, now starts in the area behind Noninji, which is full of accessible and easy hiking trails. The closest one is Tenranzan (Mount Tenran). Above all, this is a sort of trial run for beginners, as it’s only 195 metres above sea level, but it makes for a good workout. It used to be called Mount Atago because the Atago Shrine stood on its summit. In 1883, it was visited by Emperor Meiji who came to watch the army training in the Hanno area. From the observation deck at the top, you can see the Chichibu Mountain Range, Okutama and, on a clear day, even Mount Fuji. Other hiking trails lead to Mikaeizaka and Mount Tonosuyama further westward. Depending on how much time and energy you have, from Tenranzan you can branch eastward instead and walk the Oku-Musashi Nature Trail. The region offers many walking options, and the Hanno City website has plenty of maps and information including bus and train connections (see links), but unfortunately they are all in Japanese. If you prefer to spend a lazier day surrounded by nature, you should get off one station earlier, at Motokaji, and pay a visit instead to the Tove Jansson Akebono Children’s Forest Park (Kodomo no Mori Kôen). This park was featured in the 20th episode of the second season of Encouragement of climb, and it looked like the product of the author’s imagination. So I was surprised when I found out that it was a real location, and that its origin had nothing to do with contemporary anime. In fact, the park is also known as Moomin Valley and Tove Jannson, of course, is the Finnish author of the famous Moomin series of children’s books.

The Moomins, however, are nowhere to be found, except in the gift shop near the park entrance where you can buy character goods such as cups and key chains. Inside the park, there are a few oddly-shaped buildings, bridges, and a tree house. The main building is on three floors and has elaborate wooden staircases, beautiful iron railings, and small windows for children to climb through. All the rooms, nooks and crannies are meant to be explored by kids.

If you still want to hike leisurely around the area, there are a few pathways behind the buildings leading into the forest to a waterfall and the tree house. Just be warned that during the weekend the park is packed with families and screaming children. So if you want to spend a quiet day there, you’d better come during the week.

While Akebono Park is a relatively small affair, Hanno City has been working for some time on a much grander project that will deepen its relationship with Finnish Culture. Moomin fans should see the results from the end of 2018 and the beginning of 2019 when Metsä Village (http://www.metsa.co.jp/) opens at Lake Miyazawa, not far from Hanno Station. This new establishment will be divided into two zones: the Metsä Village itself, which promises to offer a Northern European lifestyle experience, and the Moominvalley Park, a theme park built around Tove Jansson’s lovable hippo-like creatures.

Last but not least, Hanno City decided to give a new look to its admittedly drab train station and recently launched a design competition that was won by Finnish studio N.e.o Ark. The aim is to transform the station into a portal to the upcoming Metsä Village, and will feature forest-related elements.

FROM IKEbUKURO STATION IN TOKYO, take the Seibu line towards Chichibu and get off at Hanno Station. For more information about activities in Hanno: http://hanno-tourism.com.