Sakekasu, the compressed dregs left over from sake brewing, have become a fashionable side product in the archipelago. 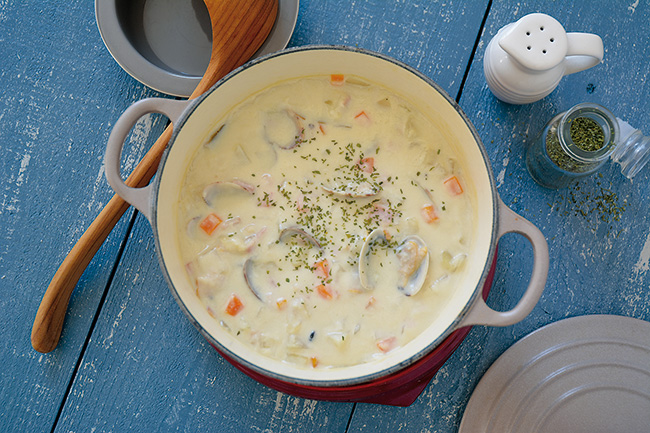 Sakekasu is used in many recipes to sweeten them and give them a sake flavour.

Nothing is wasted in sake production. For example, the powdered rice generated during polishing is sold to make rice cakes. The compressed lees (or dregs) resulting from pressing the sake are called sakekasu, and resemble a beige-coloured and smelly paste. Though the term sakekasu means “sake leftovers”, this product is far from being considered bad. It’s rich in protein, vitamins B1, B2, B6, vegetable fibre, various minerals and amino acids, and sake producers are the first to make use of it, adding it to soup or stews, giving them a mild and light sake flavour. It’s an ideal ingredient before early morning toil in the depths of winter.

It can also be eaten lightly grilled, sprinkled with a little sugar, or used in cooking.

Traditionally, it was used to marinade vegetables in order to preserve them, thanks to its alcohol content, and to add to their nutritional value.

In many regions, you can find tsukemono (pickled vegetables) based on a sakekasu marinade, which are perfect to accompany rice or tea. Narazuke, from the Nara region (see Zoom Japan no.41, May 2016), is also celebrated. Sakekasu adds an elegant flavour to marinaded fish, called kasuzuke, and considered to be a gourmet dish.

Naturally, sakekasu has existed since sake production started in Japan.

In the Man’yoshu, the first flowering of poetry in the 7th and 8th centuries, there is already a mention of a drink based on sakekasu diluted with hot water, allowing us a glimpse into the people’s lives at that period. Japanese people in the Edo period knew about the benefits of sakekasu, and called it tenigiri sake or “sake you can take by the hand”, or sakebone (“sake bones”). Amazake, a “sweet sake” based on sakekasu, was a popular drink at the time. In contrast to today, when it’s usually drunk by the Japanese to keep themselves warm in winter, at that period, the amazake seller strolled around the street mainly during the summer, distributing this energygiving beverage to the inhabitants, which they drank during the extreme heat. Moreover, the term amazake is classed as a “summer word” by writers of haiku, those short poems made popular by Matsuo Basho. The shogunate (feudal military government), aware of the beneficial effects of amazake, kept its price very low so that people could afford to buy it.

Rice vinegar had been expensive for a long time due to its main ingredient, but the start of the 19th century saw the appearance of a vinegar based on sakekazu, which led to a growth in the use of vinegar. It’s now commonly used to prepare sushi rice.

Though, today, unlike the dregs from wine making, sakekazu is available throughout Japan, even in supermarkets, its consumption has decreased since the 1970s. So the large producers of sake have begun to sell their sakekazu to make fertilizer and animal feed.

But, lately, sakekazu has seen a renewal in its popularity with the growing fashion for fermented products in general. The mainstream media extol their benefits for health and beautiful skin… Today, its sales are booming. You can find a large variety of sakekazu for sale on the Internet. Each producer sells the sakekazu from their individual batches of sake, which all taste different according to the method employed to make it. Different kinds of amazake are produced by many of the brands, either hot, cold, flavoured with citrus or ginger, and they are available from convenience stores or vending machines. Akazu, vinegar made from sakekazu, almost disappeared during the 20th century, but has surged in popularity in some sushi restaurants. You’ll also find many by-products, some of them very surprising: sweets, gelato, cakes… as well as cosmetic creams, lotions, soap, face masks… Recipe books suggest that, apart from its use in Japanese cookery, sakekazu can be used in the preparation of manju or bread (anpan, bread made from red haricot beans was traditionally prepared with sakadane, a yeast made from koji rice as used in sake making). Cooked sakekazu tastes a bit like cheese, and can be added to savoury biscuits or baked dishes.

Eating a bowl of rice accompanied by narazukepickled vegetables and kazazuke-marinaded fish, washed down with a glass of sake, must be the ultimate meal based entirely on rice!