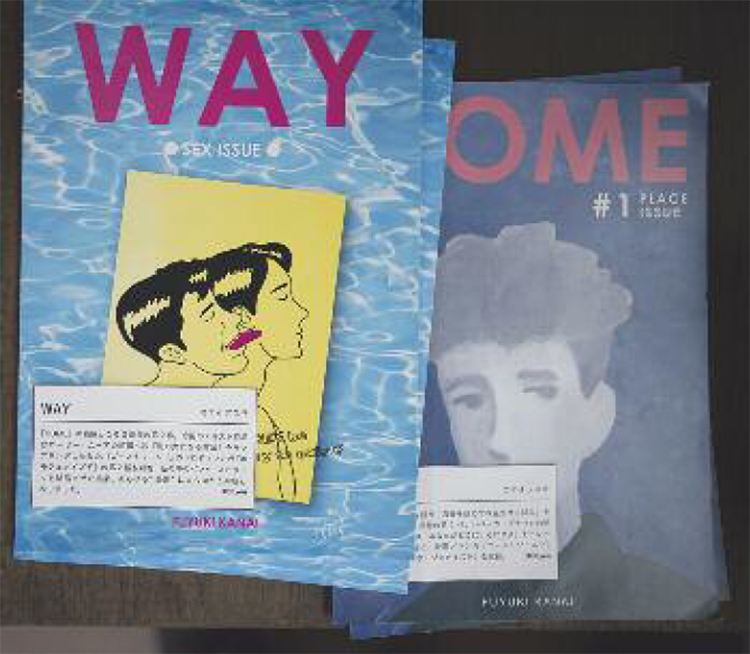 Promoting zines is an important part of Cry in Public’s activities.

Outside the Japanese capital, there are numerous very active groups supporting entrepreneurial freedom.

DIY culture can flourish anywhere, and Mishima is no exception. Located in Shizuoka Prefecture, some 90 km south of Tokyo, this city looks like many other small towns around Japan, and its only claim to cultural fame is probably the fact that author Mishima Yukio (born Hiraoka Kimitake) chose the city’s name as his pseudonym. Or so it was until a few years ago, when a group of zine makers and punk rockers opened Cry in Public (CIP). Zoom visited this very active alternative space and infoshop and talked to one of its founding members, American-born Brian Clifton.

Brian, I first met you thanks to your Huckleberry Zine, but you were already involved in DIY culture even before moving to Japan, weren’t you?

Brian Clifton : Yes, I was. I was interested in the activist and zine scenes back in America. Every time I moved to a new place, even abroad, I always looked for people who shared this DIY punk rock ethic. I’ve always believed in the idea of creating something yourself. So when I came to Mishima I did the same. Now, this is a rather small city – nothing compared to Tokyo or Osaka – but I was lucky to meet a few people who shared the same values as me, and we decided to start a collective.

How did you meet the other members?

B. C. : It’s kind of a cool story: every day, on my way to work I saw this bunch of people skateboarding. I wanted to say hi, but I was always in a hurry. Then one weekend, I went to their skateboard ramp with a stack of zines that I planned to give them, but nobody was there. So I left the zines there with a note of greetings and forgot about the whole thing. A while later, I opened my own school and one of my first trial students was Masumi, one of the skateboarders, who needed to learn English for his job. He showed me my note and said, “Did you write this?” That’s how we became friends (laughs). He later introduced me to Dirty (or Daa-san, as we call her), who is a member of the Popdrom Service collective.

Dirty is a veteran zine maker and her works (Carson Zine, Kathy Zine) are pretty famous. I thought she lived in Tokyo.

B. C. : She did. She moved here after having a child, but missed the Tokyo DIY scene, so we were lucky to find each other. We got together and started looking for a space to do our things. It wasn’t easy because we wanted a cheap place to rent as we personally cover most of the expenses. We wanted to do everything legit, not squat in an abandoned building. At the same time, we needed a place that was close enough to the station so that the people from out of town who came to our events wouldn’t have problems finding us. Eventually, we managed to sort everything out pretty well. Unfortunately, this space is a bit small, but it’s okay.

You’ve mentioned expenses. Of course, you guys have to pay the rent, utilities, etc. How does it work? Do you have a membership system?

B. C. : Yes, something like that. Right now there are about ten full members, but you can come to our events even if you’re not a member, and hopefully give a little contribution. Daasan uses CIP as her office as well (she’s a translator), so she pays a greater share of the costs. We also get money from donations, and we sell things like our zines and shirts.

As soon as one enters CIP, there’s a rack displaying zines and books. These are things you sell, right?

B. C.: Yes, it’s relatively new and we’re still figuring out what to do with it. Most of us either make these things ourselves or know people who do similar things, and this is our way of promoting them. We’re also collaborating with bookstores and other alternative spaces such as Sunny Boy Books and Irregular Rhythm Asylum in Tokyo. Apart from this rack, you’re free to read all the materials displayed on the other shelves. There are certain times when we open the doors to anybody who wants to visit the place. You can check out all our activities and events online on our Twitter account. For example, I do a Really Really Free Market, which is similar to the Kunitachi 0-Yen Shop, and, of course, everybody is free to come and take what they want.

CIP is a rather unusual place, especially in a small city like Mishima. How’s your relationship with people in your neighbourhood?

B. C. : I’m pretty sure many of them have been puzzled by our activities and wondered who these strange guys were, but so far we’ve never had any issues with our neighbours. We were a little worried at first because we displayed all these anarchist slogans (“Burn down the walls that say you can’t,” “Resist psychic death”), but luckily we’ve never had any problems. Sometimes people who live or work around here come to see what we’re up to or stop by for a chat. It’s all very friendly. Next to CIP there’s an okonomiyaki restaurant, and we sometimes have lunch there. Strangely enough, we tried to reach out to the students at the local university (they have quite a few foreign exchange students), but with little success.

Tell me about some of the events you’ve arranged so far.

B. C. : We have a monthly zine event where people get together to exchange and read zines. We even did a zine festival once, inviting people from all over Japan. That was really cool, but it’s a little hard to organise bigger events like that because we all have our jobs, families and other commitments outside CIP. Other than zines, we do workshops where we share different skills like woodcut printing and making mandalas. Also, two of our members are farmers, and they’ve done workshops on fermentation. Daa-san is particularly interested in literature, and has given a series of lectures on American author Carson McCullers. Then, of course, we have music events and even children’s dance parties. We actually do many kid-friendly events because many of us have children. As you can see, somehow we manage to do all kinds of things even in such a small space.

As you’ve mentioned farming, I’d like to ask you about so-called “guerrilla gardening”. I remember you briefly touched on this subject in your interview with fellow CIP member Masumi who’s a farmer (in Huckleberry Zine #5).

B. C. : Guerrilla gardening is the act of gardening on land that you don’t have the legal right to cultivate. At the most basic level, you don’t need to learn any particular techniques in order to do it. You just choose a patch of land, even if it’s very small, and sow whatever seeds you want. When I first met Masumi, we realised that we had been doing guerrilla gardening on the same side of the same road (laughs). You see, you don’t need to care who the land belongs to. Possession of land is regulated by laws, but sowing seeds is a natural thing. Nature doesn’t care about laws.

How would you compare the Japanese DIY scene with the one back in the States?

B. C. : Obviously, the American scene is much bigger. However, a lot of people have a rather superficial approach to activism. For me, it was a little bit like that: though I was attracted to the DIY scene, shared their values, and even wrote a few pieces for my friends’ zines, I actually didn’t make my own zine until I moved to Japan. Here, the people who are into it are incredibly committed, probably because each local scene in Japan is so small that they fly completely under the radar of mainstream culture. If you’re in a band, make a zine or are an activist you end up being very passionate about what you do.