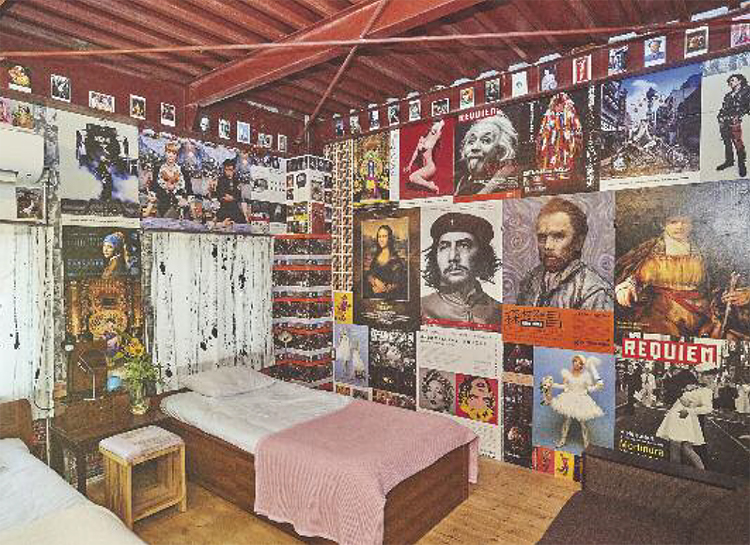 Situated in the Kamagasaki district of Osaka, Cocoroom was founded by the poet Ueda Kanayo.

After the madness of the financial bubble and the subsequent crisis, some people are rethinking the way society interacts.

Once upon a time, Japan was in flames, literally. As we reported in our April 2018 issue, Japan in the 1960s was a troubled country, torn apart by the endless struggle between a conservative government and the left-wing student movement. Then, in the early 70s, the protesters either gave up or went underground and embraced terrorism. For the next two decades, Japan disappeared from the map of worldwide social activism, as people enjoyed better economic conditions and embraced a hedonistic approach to life which culminated in the wild years of the “bubble economy”.

But now the party’s over, and as a two-tier economy has created a new class of precarious workers and families in need (see Zoom Japan #55), more and more people have rediscovered DIY culture and grassroots activism. This movement has been further strengthened by the 2011 nuclear disaster in Fukushima, whose political implications have convinced an increasing number of people to embrace a more active kind of democratic participation.

While globalization is based on consumerism and social and economic exploitation, many groups in Japan have joined similar movements abroad in promoting a more human environment based instead on gift culture, collaboration and reciprocity.

Even more importantly, as writer Tsurumi Wataru wrote in a recent essay, Japanese activists, like their international counterparts, are now moving their main focus away from protesting against the establishment to creating alternative lifestyles.

In this issue you will read about Tsurumi’s Kunitachi 0-yen Shop (Tokyo), the alternative space Cry in Public (Mishima) and and punk orchestra Turtle Island (Toyota). Many more such places can be found around the archipelago. To give you just a few examples:

Kosaten (http://kosaten.org/en/) is a cozy, laid-back space in West Tokyo run by a small collective called Dis-locate. According to its members, this is “more than a simple art project and different from direct activism”. They welcome whoever is interested in social issues and social interaction. On a weekly basis, you can join discussions in both Japanese and English about feminism and gender, refugees in Japan, and other contemporary issues, but they also offer creative activities (e.g. Open Art lab) and cooking classes (often led by an international resident) for a low fee.

La Shibaura House (www.shibaurahouse.jp/en) is one of the few non-governmental spaces in Tokyo offering an open public space for free use. Designed by famous architect Sejima Kazuyo, the building’s first and second floors feature a kid’s play space, a library (mostly design-related books) and a refreshment area. They can be freely used by everybody for as long as they want for studying, reading, creating, socialising, relaxing, eating lunch, etc. Their events include kid’s playtime groups, English classes, discussions and more, often with an international connection. The garden on the second floor sometimes hosts growing and harvesting events throughout the year. One main idea behind Shibaura House is that the openness and welcoming atmosphere of the building allows for interaction between the local residents and workers or visitors passing through.

Kashi Harappa ONDI (www.facebook.com/ harappa.ondi) is a unique place in Tokyo’s urban landscape. “Harappa” means open field, and indeed, this is a small piece of undeveloped, “vacant” land. Located in a quiet street in Tokyo’s Yanaka district and surrounded by residential homes and old businesses, this plot of land is regularly rented by its owner for such public activities as markets, dance and music performances, photography and art exhibitions, storytelling, crafts, food, etc. The rent itself (for one or more days) is extremely cheap. Importantly, as this is private land, people can do whatever they want without fear of being stopped by the police. Of course, being an open space the seasons dictate how many events take place. There are fewer events in winter, but the space is available all year round. In a city like Tokyo where unregulated space is almost non-existent and galleries charge high rental fees, ONDI offers an ideal space to experiment and be creative.

Hello Garden (http://hellogarden.jp) is another unique open public space in Chiba, east of Tokyo – a garden whose aim is to inspire and provoke thought about everyday living; to show people that they can make small changes in their lifestyle to create greater social changes. Like ONDI in Yanaka, this is a regular house plot bought by the owner, who then decided to offer it as a community space, so that local people could appreciate their own area and have the opportunity to try new things. The space includes different seasonal vegetable and herb plots, a few small trees and flowers. Another permanent feature of the garden is a book and magazine library, available to read on the spot or take home. The publications include DIY, lifestyle, cooking and gardening books. There is also a “How Much Shop” – a space where they display a few items (clothes, household goods, etc.) and you set the price for the item you want. Their activities include cooking events (they seem to be a constant even among DIY groups), a language lab, live DJ and music nights, visuals, and market stalls for homemade crafts. In the end, they all serve to promote the garden’s core values of community sustainability, person-toperson exchange and DIY making.

Kuriya (http://kuriya.co) is an organisation working with immigrant/foreign youth and Japanese youth (aged 16-26) in Tokyo. Their goal is to connect the two communities through creativity, at the same time building their selfesteem and life skills. More broadly, they want to demonstrate the strength of a multicultural Japanese society. This takes the form of participation in creative workshops and classes – anything from film to photography and dance – which give the participants a chance to learn about cultural differences in a positive and active way. Based in Takadanobaba, near Shinjuku, Kuriya is funded by the Arts Council Tokyo and the Toyota Foundation.

Cocoroom(http://gcg.cocoroom.org/en/) is an Osaka-based NPO, culture centre and guesthouse doing creative and practical outreach with its problematic local community. It’s located in Nishinari (better known as Kamagasaki), Japan’s largest day-labourer district. Cocoroom’s founder Ueda Kanayo and her team work with locals creatively and with great dedication, while at the same time hosting Japanese and international travellers in their guesthouse. Cocoroom’s name comes from koe (voice), kotoba (words) and kokoro (heart) and summarises their attitude to listening, understanding and connecting with the locals and the many different people passing through. Kamagasaki has a bad reputation among Japanese people as a dangerous area (in the past several riots took place here), but many day-labourers are now elderly, and with little work available they have very few social connections. An increasing number are becoming homeless. Spending some time at Cocoroom gives you a chance to know a different side of Japan. Local residents regularly stop by at Cocoroom’s café to get some free tea and have a chat with the staff. Communal lunches and dinners make everybody feel like they’re part of a larger community. Poet Ueda Kanayo first opened Cocoroom in 2003, and runs many of the cultural events, which include haiku workshops, calligraphy, amateur theatre productions, and festivals. The Kamagasaki University of Arts is open to everybody, and often invites professionals to give lectures and hold discussions and workshops. It’s probably hard to find another place in Japan like this.