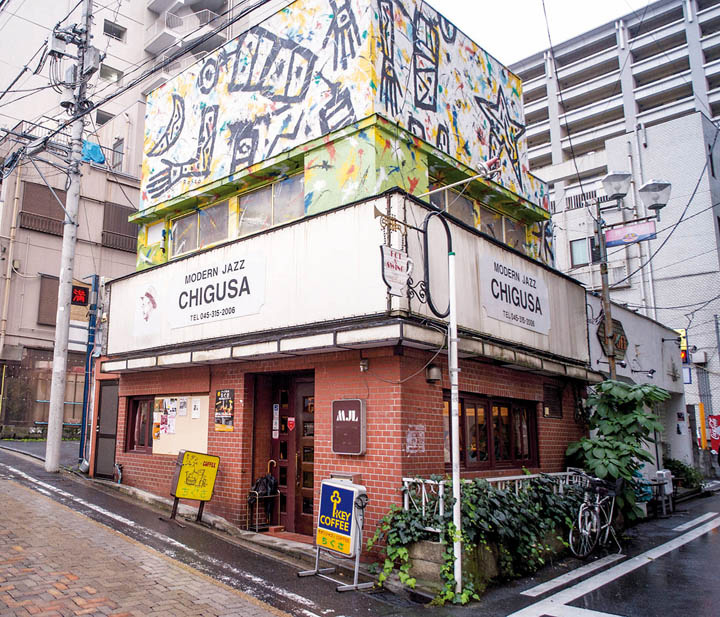 To experience the Japanese enthusiasm for jazz, one only needs to pay a short visit to Chigusa jazz cafe.

If you find yourself in the Tokyo/Yokohama area and want to soak up some of the local jazz atmosphere, you can choose from among many dedicated bars, cafes and live venues, each one with its own distinct character. However, no place makes fans’ hearts beat faster than Chigusa, Japan’s oldest and arguably most famous jazz cafe. Located just a few minutes west of Sakuragicho Station, near the port of Yokohama, the red brick building is easily recognizable thanks to its colourful second-floor graffiti and the portrait of a smiling bespectacled men next to the cafe’s name. “That’s Yoshida Mamoru,” says Yusa Masataka, who heads the Chigusa-kai (Chigusa Association) that rescued the cafe in 2012. Yoshida is considered one of the patron saints of jazz culture in Japan. He first opened Chigusa in 1933 when, despite the increasingly anti-western attitude of the authoritarian regime, American culture was still popular. “In fewer than ten years Yoshida accumulated a 6,500-strong record collection”, Yusa says, “no small feat when you consider how expensive and difficult it was to buy jazz records at the time. Imported American records could be five or six times more expensive than an average record made in Japan”.

Unfortunately, the place was closed down in 1941 by the military regime, and one year later Yoshida was drafted into the army. When he came back from the war he discovered that his cafe had been destroyed by the American air raids, together with his prized record collection. “So he just started all over again from scratch,” Yusa says. “Yoshida was much more than just a jazz lover. He devoted all his life to his favourite music. He never married and used to live with his sister Takako in a small place next to the cafe. He really wanted to nurture the local jazz scene and create a place where both fans and musicians could share their passion. Many musicians actually came here to learn new tunes”. Yusa shows me a signed portrait photo of internationally renowned pianist and band leader Akiyoshi Toshiko, which takes pride of place between the cafe’s two massive speakers. “Yoshida told me that Ms. Akiyoshi (a rarity among the mostly male customers) used to spend hours here,” Yusa says. “She particularly liked Bud Powell, and would ask Yoshida to play certain passages again and again, apparently trying to memorize them”. If rebuilding the Chigusa cafe itself was not particularly difficult, getting hold of the records was a much harder task. Luckily for Yoshida, the allied occupation of the country (1945-1952) brought many American soldiers to Japan, and it was these soldiers who came to the rescue. “Yoshida and his sister were very friendly, and he could actually speak English quite well,” Yusa says. “For many American GIs who were stationed at the nearby bases, Chigusa quickly became a home from home. Probably the only thing they didn’t like was their Japanese-style toilet (laughs). Many jazz records at the time were produced by US labels that were only available to the American armed forces. Soldiers were supposed to play them only inside their bases, but Yoshida convinced some of them to buy copies for him. That’s how he started to rebuild his collection”. Yusa’s love affair with Chigusa goes back to the early 1960s when he began to hang out at the cafe as a junior high school student. Yoshida continued to run Chigusa until he died in 1994, at the age of 81. His sister kept the cafe open for 13 more years, but at the turn of the century she began to have health problems and in 2007 she gave in to the property developers and sold the building. “By then I had already started the Chigusa-kai in order to ease the burden on Takako-san of running the cafe”, Yusa says, “but in the end we could only do so much. The property developer was very insistent because they wanted to build a block of flats in the neighbourhood and, one by one, all the shops around Chigusa sold up. The day Chigusa was demolished was a very sad day for everybody”. However, that wasn’t the end for the two storey jazz cafe. Two years later, Chigusa-kai rented a public facility in the same district and for nine days ran a temporary cafe that attracted 2,500 old and new fans. “The unexpected success of that brief experience gave us new energy and inspired us to resurrect the cafe”, Yusa says. “We were lucky enough to find support from other shops in the Noge district, and eventually even the City of Yokohama helped us rent a new place”.

The new Chigusa is situated not far from its original location in Noge, and in many respects it has retained the same look and feel as the original premises. The wooden chairs have been replaced by about 18-20 comfortable seats and the new audio system now features two turntables behind a glass partition on the counter, but the LP album covers and framed photos are still on display – such American icons as Duke Ellington and Charles Mingus, but even a few Japanese musicians like Akiyoshi and trumpet great Hino Terumasa. On the left of the giant speakers there is also a piano (the cafe regularly organizes live concerts) and a well-stocked library, while the right side is mostly taken up with the impressive record collection featuring swing and other jazz classics from the 1930s and 1940s, big band music, be-bop and other modern jazz genres, including more recent works. Everything is carefully written down in the multi-volume catalogue from which everybody can make a request. While the atmosphere is quite relaxed, most customers don’t seem to be very talkative as they prefer just to listen to the music while drinking coffee, juice or maybe something stronger like beer, whisky or shochu (but only after 18.00). JEAN DEROME The oldest jazz bar in the archipelago was saved in 2012. It remains a favourite place for jazz lovers

Article and photo by Jean Derome